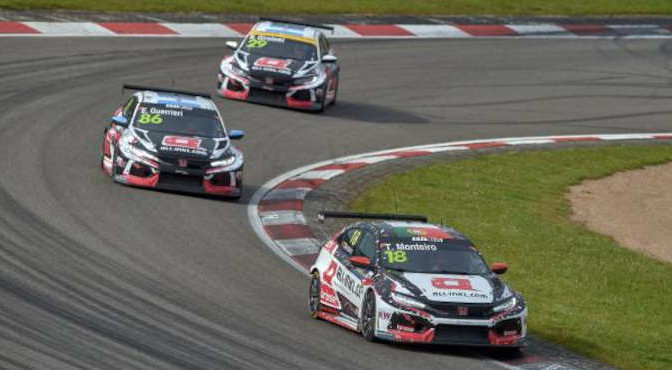 The WTCR – FIA World Touring Car Cup makes its first visit to Estoril in Portugal this weekend, with the Honda Civic Type R TCR teams and drivers at the forefront of both title battles following a successful opening race weekend in Germany.

Chief among the Honda Racing quartet aiming for a strong round is Portuguese driver Tiago Monteiro, who is flying high after a victory last time out.

The ALL-INKL.DE Münnich Motorsport driver won the opening race of the season at the Nürburgring and sits second in the points, with more success targeted this weekend at his home event – which for 2021 has switched from Vila Real to Estoril.

Tiago has plenty of pedigree in his home country; he twice sealed memorable World Touring Car victories in Vila Real, most recently in the WTCR in 2019 during his comeback season, and also won at Estoril when the World Touring Car Championship raced there in 2008 and at the Algarve circuit two years later.

Team-mate Attila Tassi showed impressive speed at the Nürburgring earlier this month and, though that did not translate into the qualifying result he deserved, he turned in two strong race drives to record a best finish of fourth.

The WTCR’s most recent visit to Portugal in 2019 was a memorable one for the Hungarian, who was the fastest qualifier in Vila Real and became the youngest polesitter in WTCR history.

In the ALL-INKL.COM Münnich Motorsport camp, Nestor Girolami shares second place in the drivers’ Championship with Tiago after a pole position and a podium finish at the Nürburgring.

‘Bebu’ has not raced at Estoril previously, but does have testing experience at the circuit and heads to the second round confident of building on the success of the first weekend.

His team-mate Esteban – who became a father last weekend – was a strong fourth in the season-opening race at the Nürburgring and may well have joined Nestor on the podium in race two but for an issue before the formation lap that forced him to start from the pitlane.

Like Tiago, Esteban also has race-winning form at Estoril from his time in single-seaters, with a victory in Superleague Formula in 2009.

The Estoril weekend is the first round of the 2021 season to feature the WTCR’s standard qualifying format, with the knockout Q1 and Q2 sessions followed by the Q3 shootout segment that determines the top-five starting positions and, like Q1, awards points.

Though it was originally hoped that the round would take place in front of fans, it will instead run behind closed doors.

“It’s a great feeling to be racing in Portugal again after a year out, and even better to come to my home round after such a positive start to the season. I’m very proud to have such a good record in Portugal in World Touring Cars, but it counts for nothing this weekend and we will have to see where we are come qualifying. It’s a huge shame there won’t be any fans this weekend because the Portuguese supporters are some of the most passionate anywhere and that can be a really important boost, but I hope to give them results to celebrate in any case.”

“Moving on from the first round there are two elements that give me confidence as we prepare to race at Estoril for the first time: the first is that the pace was strong throughout the Nürburgring weekend, which I showed with fourth place in race two, and the other is that there is room to improve with stringing a lap together fully in qualifying. I have very good memories from my previous visit to Portugal when I secured pole position and led the race, so the target is for another strong performance, however tough it may be.”

“Estoril is a new track to the calendar and a new one for me to race at, but I have testing experience there as well as good knowledge and experience of the circuit to learn from in the team so that will definitely help when we get there. I’m really looking forward to the races because it’s a very nice track. We showed at the Nürburgring that we are working really well, so I feel quite confident that we can continue our good pace and collect good points to keep up our momentum in the championship.”

“It’s been a very busy time despite the three-week gap between races, but I am eager to be back on track at Estoril. I have good memories of winning here earlier in my career and, even though that was a little while ago, I remember it is a layout which can provide good fights on track. The issue before the start of race two in Germany was a bit of a setback but it is also an opportunity to become stronger together as a team. Now we aim to have a clear weekend and bounce straight back.”