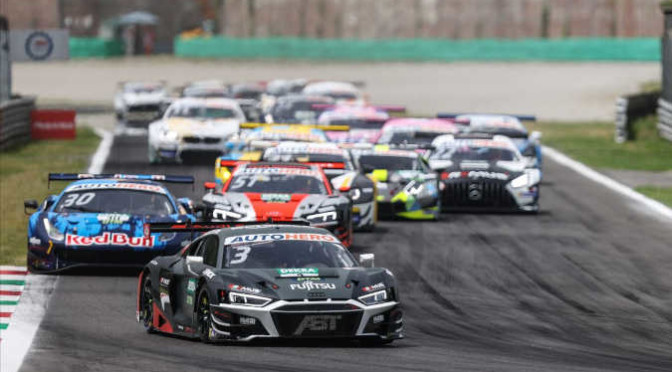 Pole position and victory on his birthday: Kelvin van der Linde crowned his 25th birthday with his maiden DTM victory in the Sunday race at Monza. In the morning, the South African had already celebrated his first-ever pole position in the long-standing series with the Audi run by ABT Sportsline. With DTM runner-up Nico Müller (SUI/Team Rosberg) in second place, it was even a 1-2 for Audi. Classified third, Lucas Auer (AUT/Mercedes-AMG/Team WINWARD) made it three brands on the podium. In the season-opening race on Saturday, Ferrari had secured its maiden win on its DTM debut Red Bull junior Liam Lawson (NZL/AF Corse).

“This is a proud moment for me,” a buoyant DTM rookie Kelvin van der Linde said. “I have been working hard to get into DTM for such a long time. Now, both my brother Sheldon and myself have scored DTM race wins. Surely, our parents are over the moon.” His brother Sheldon, three years younger, had arrived in DTM with BMW in 2019 and had scored his maiden win last year. Nico Müller was also visibly happy, showing together with third-placed Lucas Auer that the seasoned DTM stars are also able to keep up with the GT specialists. “This is a very good start of the new season for us,” Müller said. “I had some hard fights and I am already looking forward to the next duels. That was a really good DTM season opener.”

DTM, run with GT race cars for the first time this year, staged two entertaining races with excellent motorsport and a wealth of fascinating position fights at the high-speed track in Monza where overtaking is traditionally difficult. The best example came from ex-DTM champion Mike Rockenfeller (GER) with the ABT Audi and the only 19 years old Belgian Esteban Muth with the T3 Lamborghini. Over many laps, the rookie and the stalwart battled, driving side by side through the corners at top speeds while fighting for eighth place. For several laps, ‘Rocky’ was having a tough time. He only made his way past Muth with a spectacular manoeuvre on the outside on the penultimate lap.

How close it is in DTM already became clear by the open battle for pole position in qualifying on Sunday morning. Eventually, five brands were represented among the first six positions: Audi, Ferrari, BMW, Lamborghini and Mercedes-AMG. It was Kelvin van der Linde who claimed pole position. Almost, the two South African brothers Kelvin and Sheldon had even locked out the front row of the grid, but in the final stages, Saturday’s race winner Liam Lawson just managed to split the brother pairing with the Red Bull Ferrari.

Like on Saturday, the race start on Sunday in close double-file formation, the so-called Indy-style start, was a breath-taking affair and once again with a high level of discipline and without any incidents. Kelvin van der Linde stayed out in front with his Audi and was already able to pull away a few metres coming out of the first chicane. Nico Müller mounted his first challenge against Lawson going into the second lap and went past the Ferrari driver in the chicane. The battle for second remained thrilling as four cars, racing three abreast at times, were very closely together: Müller with the Audi, Lawson with the Ferrari, Sheldon van der Linde with the BMW and Esteban Muth with the Lamborghini. Eventually, 22-year-old Sheldon van der Linde came out on top in this four-way battle and at the end of the second lap, the two South African brothers were running first and second. The battles for positions behind the two brothers continued: Muth and Lawson went through a chicane side-by-side, Lawson came out second best, spun and dropped to the back of the field.

The field got already mixed up after five laps as no less than seven cars headed into the pit lane for the mandatory tyre change. While Sheldon van der Linde and Muth lost time in the process, Lucas Auer made up three positions courtesy of his tactics and a fresh set of Michelin tyres and moved up into third place. The last one to get new tyres was Sophia Flörsch at the end of lap eleven. On this eleventh lap, the 20-year-old from Munich even racked up her first miles in the lead of a DTM race. Eventually, she turned the tables and kept her British colleague Esmee Hawkey in the T3 Lamborghini at bay on Sunday.

Kelvin van der Linde, meanwhile, was safely in control as the race leader and went on to take the chequered flag with a four-second margin, followed home by Nico Müller and Lucas Auer. Sheldon van der Linde achieved the best result for BMW to date in fourth place while Muth scored the first points for Lamborghini by finishing eighth.

Following the successful season opener at Monza in Italy, the second DTM race weekend has been scheduled from 23-25 July at DEKRA Lausitzring, located between Berlin and Dresden, as usual with one race each on the Saturday and on the Sunday.