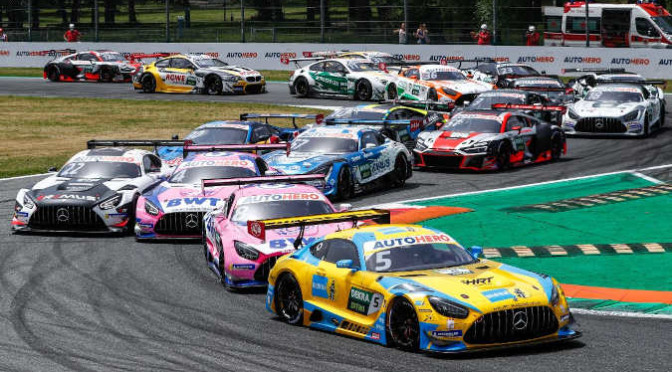 Liam Lawson is the youngest-ever DTM race winner. In the race on Saturday, the 19-year-old from New Zealand delivered a perfect debut for Ferrari and his team AF Corse in the long-standing race series, and at the home track in Monza near Milan to boot. Mercedes-AMG, meanwhile, rounded out the podium on its DTM return with Vincent Abril (MON) and Maximilian Götz (GER), both from Hubert Haupt’s team (HRT). Formula 1’s Alex Albon (THA) finished fourth after a furious recovery drive from 14th on the grid with his AlphaTauri Ferrari. The race marked an entertaining start of the 2021 DTM season in which GT sports cars are being used for the first time. At least the season-opening race made clear that the DTM stalwarts are still having a hard time against the GT specialists at the moment. The best DTM regular was last year’s runner-up Nico Müller (SUI) with the Team Rosberg Audi in eighth place.

“I am very happy with the outcome of the race,” said Liam Lawson, the first New Zealander to finish on a DTM podium. “My start was very good, I was able to make up positions straight away. The pit stop was perfect and the pace was good until the end.” The decisive moment came as Vincent Abril rejoined the race following his pit stop, almost side by side with Lawson. On tyres that were still cold, Abril had nothing in store as Lawson’s Red Bull Ferrari pulled away. “AF Corse were a bit quicker than us in the pit stops. We have to analyse that exactly, where we lost the time,” HRT drivers Abril and Götz said in unison.

With the spectacular Indy-style start, in which the race cars approach the start line in closed double-file formation, the DTM field got the battle for the first victory in the next chapter of the DTM’s history, the first with GT race cars, underway. Vincent Abril made the best of his pole position and led the way until coming in for his mandatory pit stop.

In summerly temperatures of around 30 degrees, there were some hot battles in the field. The first contact was between Timo Glock (GER/BMW/ROWE Racing) and Dev Gore (USA/Audi/Team Rosberg). For the American, this resulted into an early retirement while Glock incurred the first time penalty of the season. Daniel Juncadella (ESP/Mercedes-AMG/Team GruppeM), meanwhile, was unable to avoid contact with Müller’s Audi. The runner-up spun in a spectacular way, Juncadella also incurred a minor time penalty. The first driver to retire from the race was Swiss Philip Ellis (Team WINWARD), whose Mercedes-AMG came to a halt from fourth place on lap two. His teammate Lucas Auer (AUT) didn’t have any luck either. He considerably dropped back after an issue during the tyre change.

The much-noticed duel of the two female drivers in the field, the first in DTM since 2012, saw Esmee Hawey coming out on top. The 23-year-old Brit with the Lamborghini (T3 Motorsport) just managed to keep Sophia Flörsch (GER) with the Audi (ABT Sportsline) at bay. In the opening part of the race, Hawkey had been running in a respectable eleventh place until her early pit stop while Flörsch, in turn, even moved up as high as third place as a result of her late mandatory stop.

Earlier on, Vincent Abril had claimed the first pole position of the season. On Saturday morning, the Monegasque was fastest around the Grand Prix track in the Royal Park of Monza with his Mercedes-AMG run by the HRT team. Mercedes-AMG even locked out the first four grid positions as Daniel Jucadella (ESP/Team GruppeM), Lucas Auer (AUT/Team WINWARD) and Maximilian Götz (GER, Team HRT) slotted in behind Abril. The best-placed non-Mercedes driver, 19-year-old Belgian Esteban Muth surprisingly ended up fifth with the Lamborghini.

At the high-speed track in Monza, the second DTM race will follow on Sunday. As usual, the race gets underway at 1.30pm and will be broadcast live in over 60 countries as well as on SAT.1 (from 1pm) and streamed at the series’ own OTT platform grid.DTM.com.