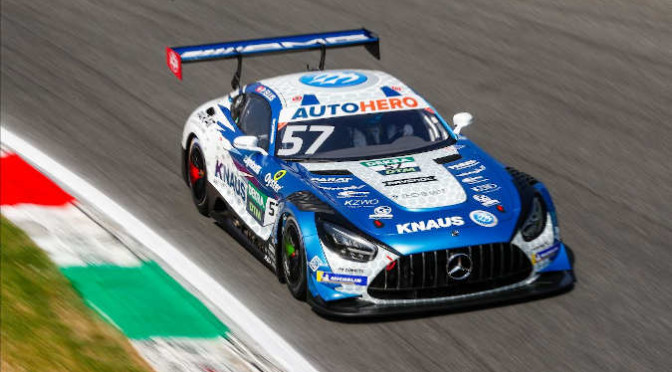 DTM rookie Philip Ellis made the first mark during the DTM season opener at Monza. Driving the WINWARD team’s Mercedes-AMG, the Swiss surprised in free practice at the high-speed track in Italy with the fastest time of the day, 1m 47.617s. DTM returnee Maximilian Götz (GER/1m 47.624s) followed closely behind with the Mercedes-AMG run by the HRT team. At Ferrari’s DTM debut, Red Bull drivers Alex Albon (THA/1m 47.670s) and Liam Lawson (NZL/1m 47.670s) posted the third and fourth fastest time at the home track. The best-placed DTM stalwart, last year’s runner-up Nico Müller  (SUI) with the Team Rosberg Audi, ended up in fifth place with a time of 1m 47.688s.

In the 45-minute first free practice, the four best-placed drivers were only 0.064s apart. Maximilian Götz was the fastest from Alex Albon and Liam Lawson as well as Nico Müller. In second free practice, a Mercedes driver was on top again: Philip Ellis posted a time of 1m 47.617s and thus became the only driver to beat Götz’s fastest time from the first session, albeit by merely seven thousandths of a second. Nico Müller completed the Swiss 1-2 in second practice, followed by his felw Audi driver Kelvin van der Linde (RSA/Audi/ABT Sportsline). Meanwhile, the first Indian to racer in DTM, Arjun Maini (Mercedes-AMG/Team GetSpeed), caught the attention by posting the fourth-fastest time, but was also involved in an incident: he lost the right rear wheel of his Mercedes in the pit lane. Next up behind the Indian were the two BMW drivers Marco Wittmann (GER/Walkenhorst) and Sheldon van der Linde (RSA/ROWE Racing) as well as 19-year-old Belgian Esteban Muth (Lamborghini/T3 Motorsport).

“A good start of the weekend. It is difficult to assess the balance because not everybody was out with fresh tyres. I was very happy with my car, the balance is good,” Philip Ellis said after practice. On the opening day at Monza, the duel of the two female drivers in the DTM ended with a tie: in first free practice, Sophia Flörsch came out up front with the Audi (ABT Sportsline) while Brit Esmee Hawkey had the upper hand in the second session with her Lamborghini (T3 Motorsport).

From the press conference: Esmee Hawkey thrown in at the deep end

In the traditional Friday press conference, Sophia Flörsch (GER/Audi/ABT Sportsline), Esmee Hawkey (GBR/Lamborghini/T3 Motorsport), Alex Albon (THA/Ferrari/AlphaTauri AF Corse) and Lucas Auer (AUT/Mercedes-AMG/Team WINWARD) answered questions from journalists, both virtually as well as physically in the media centre at Monza. Flörsch, Auer and Albon already having taken part in DTM pre-season testing, the Monza weekend marks the first DTM activity for Hawkey. “I am really being thrown in at the deep end, but I am delighted that I am allowed to race here,” the Brit said. Sophia Flörsch shared here excitement: “It is great that the action is now finally starting, I can hardly wait.”

Alex Albon is also making his DTM competition debut at Monza and is getting qualified support from Ferrari GT works driver Alessandro Pier Guidi: “He already drove my car at Monza a couple of days ago and he is a great help. There is hardly anyone who knows the Ferrari better,” Albon explained. Lucas Auer didn’t drive a timed lap in first free practice. “We already tested at Monza recently and reached a really good set-up there, so we didn’t go out in first practice. On Saturday, we will see what the real balance is.”

Michael Schrey (GER) was setting the pace in the BMW run by the Hofor Racing by Bonk Motorsport team in the 40-minute first free practice session. With his time of 1m 58.238s, he was 0.355s faster than Moritz Löhner (GER/FK Performance Motorsport, BMW). The DTM Esports champion is making his real-world race debut at Monza this weekend. Löhner’s teammates Ben Green (GBR) and Yann Zimmer (SUI) in third and fourth place rounded out the clean sweep by BMW drivers in the first four positions. Next up was defending champion Tim Heinemann (GER) with the Aston Martin of the PROsport Racing team in fifth. Fastest of the three female drivers in the field was Stéphane Kox (NLD/Ring-Racing, Toyota) in 16th place.

Michael Schrey’s time from first practice also turned out to be the best time of the day as lap times were up by over a second in the second session in the afternoon as a result of the higher temperatures. This time, the order of the two fastest drivers was reversed: Löhner came out on top with 1m 59.398s, followed by Schrey, who was 0.256s down. Next up were Ben Green and Yann Zimmer, once again in third and fourth place. Brit William Tregurtha (GBR) ended up fifth fastest with the Mercedes-AMG run by CV Performance Group.