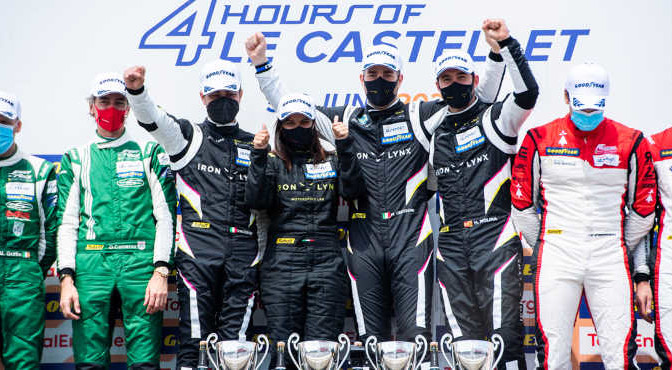 Italian racing team Iron Lynx experienced a dizzying weekend of successes across three championships at the weekend, with wins and podiums at both Paul Ricard in France and Misano in Italy.

In Italian F4 at Misano, it was a maiden win for both Leonardo Fornaroli as a driver and Iron Lynx as a team in race one, which was followed by three further podium finishes across the weekend – two for Fornaroli and a second rookie podium for Ferrari Driver Academy racer Maya Weug. Fornaroli now lies second in the Drivers’ Championship overall.

It was Sargeant’s teammate Rino Mastronardi who took pole position and started Iron Lynx #8 in the Le Mans Cup two-hour race, but a safety car period obliterated Rino’s early race advantage and Logan delivered a perfectly aggressive stint to bring the car back into the podium positions, later to be promoted to second overall. The Iron Dames #9 Ferrari was driven to second position by Sarah Bovy prior to pitting. Re-joining the track in sixth, Doriane Pin, the Dames’ new “pocket rocket”, wrung the neck of the Ferrari, challenging far more experienced GT racers and deservedly making her mark with a third place in the final results.

Back at Paul Ricard for Sunday’s European Le Mans Series 4-hour race, there was early drama for the Iron Dames #83 car when it was eliminated from the race by Michael Fassbender, the Hollywood star later visiting the Iron Lynx pit to apologise.

Iron Lynx #60 was hauled up from ninth to fourth on the road in a mega-stint from Claudio Schiavoni, whose teammates Giorgio Sernagiotto and Paolo Ruberti then brought the Ferrari home in fifth, just 13 seconds from the podium after four hours of racing.

Rino Mastronardi started #80 and soon elevated it to second place, handing over to Matteo Cressoni, who overcame the challenges of both tyre management and success balance to put the car into the lead, before Miguel Molina stepped in to bring the car home in a measured performance. The #80 car heads the GTE standings ahead of the next European Le Mans Series race at Monza next month.

Iron Lynx team principal, Andrea Piccini, commented: “This weekend was an unforgettable one for Iron Lynx. We were racing in 3 different championships and we got on the podium in all of them, having some memorable battles and taking two pole positions and two victories. Everyone worked hard but I have so much praise for the young talents who raced with us, as they all performed extremely well. I was impressed by the mental strength of Leonardo to achieve his first victory, by Logan’s pure speed and by the determination Doriane showed in her battle for the podium. We are blessed with a real depth of talent throughout the team.”
Iron Lynx’s mega-season continues next week when the team tackles round two of the World Endurance Championship at Portimao, Portugal, as well as the third round of Italian Formula 4 at the Red Bull Ring in Austria.