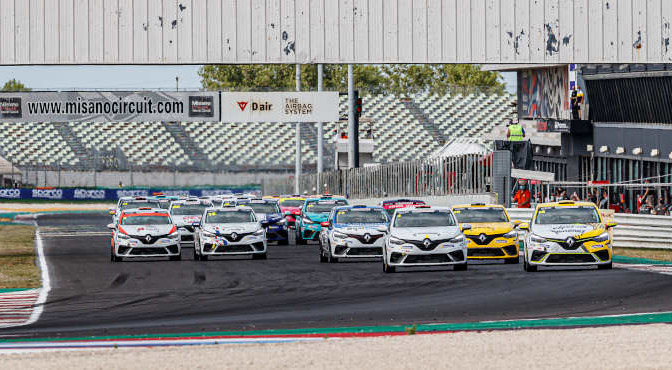 With his third win of the season a Misano, David Pouget (GPA Racing) reclaims the Clio Cup Europe lead by winning ahead of Marc Guillot (Milan Compétition) and Challenger Kévin Jimenez (GPA Racing). His rival Nicolas Milan (Milan Compétition) finished fourth on Saturday while Italian Alessandro Sebasti Scalera (Milan Compétition) completes the winners list with his victory in the Gentlemen Drivers Cup.
Already the fastest in the Friday collective tests, David Pouget kept the momentum going with his third pole position of the season, with a more than 0.6s advantage over Marc Guillot, Nicolas Milan and Kévin Jimenez.

At the start, David Pouget held on the lead but the action intensified on lap two. Federico Scionto (Scuderia Costa Ovest) and Fabrizio Ongaretto (PMA Motorsport) first made a trip in the same gravel trap, then “Due” (Oregon Team) spun and could not be avoided by Ercole Cipolla (Faro Racing). The contact between the two led to the intervention of the safety car.

David Pouget controlled the restart to increase the gap to Marc Guillot whereas the tension rose between Nicolas Milan, Kévin Jimenez and Gabriele Torelli (Faro Racing). The trio engaged in a fascinating battle at the end of which Nicolas Milan slipped behind his two rivals. Meanwhile, Filippo Berto (Oregon Team) and Alessandro Sebasti Scalera relegated Alessio Alcidi (CAAL Racing) to tenth place while Yeraly Ospanov (Milan Competition), Paolo Felisa (PMA Motorsport) and Fabrizio Ongaretto were also in a fierce battle.

Comfortably in the lead, David Pouget won with a nearly five-second margin over Marc Guillot and Kévin Jimenez. On the last lap, Nicolas Milan took fourth place from Gabrielle Torelli as Anthony Jurado looked on. Respectively seventh and eighth, Giuseppe Cirò (Progetto E20 Motorsport) and Filippo Berto completed the podium in the Challengers Cup while beating Gentleman Alessandro Sebasti Scalera. Alesso Alcidi rounded out the top ten by fending off the return of Lorenzo Nicoli (Progetto E20 Motorsport), who started at the rear of the grid because his Clio Cup did not meet the minimum weight regulations at the end of qualifying.

With the win, David Pouget retakes the lead in the Clio Cup Europe general classification from Nicolas Milan while Marc Guillot remains in third. Kévin Jimenez extends his lead in the Challengers Cup with his sixth success in the category. “Horn” was second today among the Gentlemen and now trails Laurent Dziadus by just four points.

Among the Group A drivers, Marc Guillot was fastest in qualifying ahead of Lorenzo Nicoli, but the disqualification of the Italian moved Gabriele Torelli and Anthony Jurado up one grid position. After an action-packed race, the trio crossed the finish line in the same order. Behind them, it was Giuseppe Cirò taking the top honours among the Challengers ahead of Filippo Berto and Alessio Alcidi.

Thanks to his podium finish, Anthony Jurado retains the lead in Group A with a three-point lead over Gabriele Torelli while Marc Guillot trails his countryman by six points. At the same time, Filippo Berto took advantage of Lorenzo Nicoli’s misfortune to take a one-point lead in the Challengers Cup, while Giuseppe Cirò moves up to third place with his victory.

Alessio Sebasti Scalera was beaten by Diego Cassarà (Faro Racing) in the Gentlemen category this morning in qualifying, but he replied by taking the lead on lap two, then went on for the win ahead of his closest rival Quinto Stefana (Oregon Team) and Gennaro Garofano (Garofano FG Motorsport).