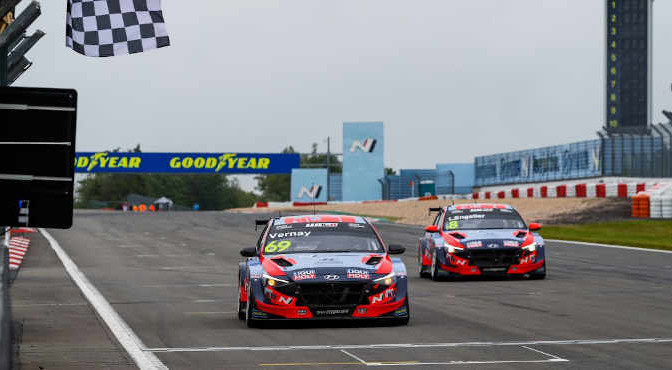 Tiago Monteiro pulled off a sublime slipstreaming overtake to win the opening round of the 2021 WTCR − FIA World Touring Car Cup on the legendary Nürburgring Nordschleife. And by holding off team-mate and home hero Luca Engstler, Jean-Karl Vernay took the Race 2 victory to leave Germany as the Goodyear #FollowTheLeader.

Yvan Muller, who started Race 1 from the reverse-grid pole driving a Goodyear-equipped Lynk & Co 03 TCR for Cyan Racing Lynk & Co, was unable to fend off Monteiro (ALL-INKL.DE Münnich Motorsport), as the Portuguese timed his move for the lead to perfection at the end of the long Döttinger Höhe straight.

It was Monteiro’s first victory on the 25.378-kilometre track in a WTCR race and the third for his German Münnich Motorsport team on home turf and the Honda Civic Type R TCR. It was also Portuguese Monteiro’s second WTCR triumph since his comeback from serious head and neck injuries sustained in testing crash.

While Monteiro led Race 1 for only a handful of turns, Vernay (Engstler Hyundai N Liqui Moly Racing Team) was in front throughout Race 2, the Frenchman resisting several attacks from his young German team-mate to give the all-new Hyundai Elantra N TCR a debut WTCR victory. Néstor Girolami (ALL-INKL.COM Münnich Motorsport) was third from the pole position.

Engstler was the FIA WTCR Junior Driver Title winner in Race 1 and 2. Tom Coronel and Gilles Magnus shared the WTCR Trophy victories in their Comtoyou-run Audis. Bence Boldizs (Zengő Motorsport Drivers’ Academy) was the top CUPRA Leon Competición finisher with P13 in Race 2. Nathanaël Berthon (Comtoyou DHL Team Audi Sport) was the best of the second-generation Audi RS 3 LMS drivers with sixth in Race 2, as Jessica Bäckman scored points on her debut in the WTCR as the series’ first female driver.

The two Cyan Racing Lynk & Co 03 TCRs of Muller and his nephew Yann Ehrlacher made a strong start from the front row as Gabriele Tarquini made one of his trademark rapid getaways to rise from fifth on the grid to third into a hectic Turn 1. Team-mate Norbert Michelisz was the big loser in the melee as he was pushed out wide and dropped from third on the grid to P10 as the 22-car field headed out on to the Nordschleife, with Muller leading from Ehrlacher, Tarquini, Santiago Urrutia, Monteiro, Esteban Guerrieri and pre-race Goodyear #FollowTheLeader Néstor Girolami.

On Döttinger Höhe for the first time Tarquini drafted up on to the tail of the two Lynk & Cos and piled on the pressure as they began lap two, to the point that Ehrlacher tapped the back of Muller’s car as they turned into Turn 1. Further back, Michelisz recovered a place by passing fellow Hyundai driver Jean-Karl Vernay for eighth.

Tarquini continued to exert pressure on Ehrlacher, tapping the King of WTCR. Then the Italian got a run on the Frenchman and swept past to take second place and set off chasing down Muller.

The first King of WTCR drafted past Muller on Döttinger Höhe, only to run wide at Tiergarten, which allowed the Lynk & Co back in front. Then as the string of cars began lap three, Tarquini succumbed to pressure from a charging Urrutia and outbraked himself at Turn 1, running wide and dropping down the pack. The order after they had all scrabbled through Turn 1 was Muller, Monteiro, Urrutia, Guerrieri, Michelisz, Tarquini and Ehrlacher, who had much ground to make up as the pack headed back out on to the Nordschleife for a tense third and final lap.

As they headed on to Döttinger Höhe for the last time, Monteiro dragged up on to Muller’s tail, pulled out and took the lead at the perfect time to claim a fabulous victory. “I tried to be smart,” said the Portuguese. “I was really banged up on the first lap, but I kept my focus and pushed as hard as possible. I saw my opportunity when Gabriele tangled at the first corner. I had a plan and it worked out.”

Muller said he was powerless to stop the Honda sweeping past. “It was close, but not enough,” he said. “I knew it could happen. Maybe I should have let Yann past because he was faster than me.”

Despite his disappointment, Urrutia still ensured a strong result for Lynk & Co by finishing third in his Cyan Performance Lynk & Co entry. He led home Guerrieri’s Honda who finished a fine fourth from eighth on the reverse grid, ahead of Michelisz, Tarquini and the first of the new Audi RS 3 LMSs of Tom Coronel, who claimed the WTCR Trophy for independent entries.

While Vernay and Engstler led the 22-car pack throughout the three-lap race following a hectic opening two corners, there was frustration for third fastest qualifier Esteban Guerrieri before the start when his Honda failed to fire up for the warm-up lap and he was pushed off the grid once the field had departed to take the start from the pitlane. His absence left a big gap on the second row.

Vernay got the drop on pole position starter Girolami on the run to Turn 1 as the Argentine driver defended hard against Engstler, but could not stop the Hyundai moving up to second. Behind them, Santiago Urrutia was hit up the back by Gabriele Tarquini, leaving rear bodywork from the Lynk & Co flapping. Then out of Turn 2 there was drama: Norbert Michelisz and Mikel Azcona made contact, the Hungarian was hit by Rob Huff who in turn had been taped by Andreas Bäckman’s Hyundai. Azcona’s Cupra was left broadside and Bäckman was left with nowhere to go and ran into the Spaniard. All four drivers were out of the race, as was Tarquini.

Vernay led Engstler at the end of lap one, ahead of Girolami, Urrutia, Attila Tassi, Yvan Muller and Nathanaël Berthon, while Frédéric Vervisch had a big grassy moment. There was misfortune for fellow Audi driver Tom Coronel too, who dropped down the order after a trip through a gravel trap on lap two.

Tassi passed Urrutia for fourth place on lap two, as Engstler continued to shadow team-mate and leader Vernay on to the third and final lap. At Döttinger Höhe for the final time Engstler drafted up to Vernay and looked set to pass, only to fall back into line and dutifully follow the Frenchman across the finish – although an emotional radio message after passing the chequered flag indicated the young German’s disappointment at a team call for the pair to hold their positions.

“At some points I was lucky to have my team-mate with me so we could work together,” said a satisfied Vernay. “He has fantastic potential. I had a little problem with the brakes, but it’s a perfect finish to the weekend and a fantastic start to the season. I’m only focusing on the title.”

Engstler put a brave face on his obvious disappointment. “I’m very happy, it’s my first WTCR podium and I worked so hard for this,” he said. “Racing is not always easy and I need to calm down a bit.”

Behind the Engstler Hyundais, pole position starter Girolami held on to third place despite an investigation into his defence against Engstler at the start. “Unfortunately they showed their pace today which they didn’t in qualifying,” said the ALL-INKL.COM Münnich Motorsport Honda driver. “Today it was clear and it was really disappointing. I couldn’t follow them, they were too fast.”

Tassi finished fourth in his Honda, ahead of Urrutia and Berthon in the first of the Audis. Muller finished seventh ahead of Race 1 winner Tiago Monteiro, with Gilles Magnus (Audi) and King of WTCR Yann Erhlacher (Lynk & Co) rounding out the top 10.

Tom Coronel finished where he started in P11 despite his moment in the gravel. Guerrieri scored points in P12 following his problems at the start and a penalty for a team member working on the car as the field pulled away on the warm-up lap. Bence Boldizs scored Zengő Motorsport Drivers’ Academy’s first points in P13 in his CUPRA Leon Competición and the final classified finisher was WTCR debutant Jessica Bäckman in her Target Competition Hyundai Elantra N TCR, becoming the first female to score points in the series.

RACE 1: Tiago Monteiro (ALL-INKL.DE Münnich Motorsport, Honda Civic Type R TCR)
“It was definitely one of those great races when you try line everything in your head and everything goes to plan. It doesn’t happen often, especially not here at the Nordschleife. But after a rough start when I lost a few positions, the pace was good and I was in a rhythm with the top four. So I kept on pushing, kept my cool and focus to try to position myself for the last lap. There was some contact in front of me, I took the opportunity to move to P2 right away and after that it was just a matter of following Yvan and then try something later on in the race. It was a good fight with him, he’s a hard racer but a very fair racer, so I knew I could fight with him until the end. I took a lot of risks of course, but you’re here and that’s the moment you have to do it and go for it. The car was very good, I’m very happy with the team, Honda, ALL-INKL of course and JAS for all the updates we have done over the winter. Everyone in the team showed the performance in the car this weekend on the Nordschleife and it was great to start the season with a win. It was a very high-adrenaline moment today.”

RACE 2: Jean-Karl Vernay (Engstler Hyundai N Liqui Moly Racing Team Hyundai Elantra N TCR)
“First of all, congrats to Tiago, that’s a perfect weekend for Skywalker [Management]. And congrats to the other guys on the podium. The weekend started not the way we wanted. We’ve already talked about it, but the most important thing was scoring points in qualifying and both races. This morning we were struggling a little bit and we found out why, and in the race it was quite perfect. I just wanted to make some changes on the set-up this morning and it really worked. The key was to take a better start that Néstor and that is what we did. After I was really in qualifying mood, trying to push the first two laps to secure a gap and the car was handling amazing, I was driving at 150 per cent. When you are feeling good you can take risks and it just comes naturally. I’m really happy with the way we worked with Team Engstler and my engineers, with all the guys from Hyundai. It was important also for Hyundai to get the first victory for the new Elantra TCR and it was good we took the responsibility to make it. With all the people from the board of Hyundai here it’s a really positive weekend.”