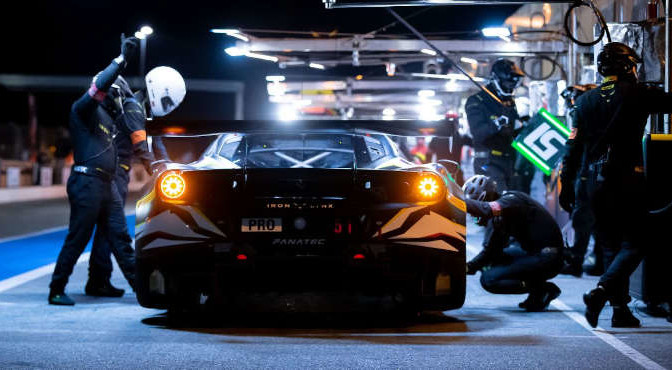 The Iron Lynx squad embarked on another weekend of GT racing with Ferrari at different venues across Europe – running two cars in the Ferrari Challenge Europe at Brno in Czechia and three cars in the Fanatec GT World Challenge Europe powered by AWS Endurance Cup at Paul Ricard in France. New to the GT World Challenge was the history-making Iron Dames entry, becoming the first ever all-female crew in the series.

In Brno, it was again Iron Dame Michelle Gatting who took pole position for both races, but Race 1 of the Ferrari Challenge Trofeo Pirelli was littered with incidents and the safety car was on extended duty. Both Michelle Gatting and teammate Arno Dahlmeyer found their races compromised, yet Michelle crossed the line in second place. In race two, Arno progressed well from tenth to fifth in class, while Michelle enjoyed some fair battles to take yet another podium spot, plus fastest lap, consolidating her championship lead.

In the lead-up to the 1000km of Paul Ricard, it was the #71 Iron Lynx Ferrari of Antonio Fuoco, Callum Ilott and Davide Rigon which claimed a hard-fought front-row spot for their Ferrari 488 GT3 Evo 2020. In the paddock for the Fanatec Esports GT Pro Series, Iron Lynx’s representative, Ferrari Competizioni GT driver Nicklas Nielsen, hoped to repeat his previous podium from Monza but was bundled off the circuit when the race was re-started, and valiantly fought back to secure fifth in class at the flag.
In the GT World Challenge 1000Km of Paul Ricard, the #83 Iron Dames car piloted by Sarah Bovy and Doriane Pin – in her first night race – made good progress. Côme Ledogar and Nicklas Nielsen brought #51 into strong contention before handing to Alessandro Pier Guidi for the final stint in sixth. The #71 car was started by Ferrari Driver Academy’s Davide Rigon and Callum Ilott, and when a full course yellow intervened, it was Antonio Fuoco who took up the attack in fourth place.

In the dark final stages of the race, Fuoco battled hard and brought the Ferrari up to second place, with Pier Guidi in fifth, only six seconds off the lead. Katherine Legge meanwhile double-stinted to consolidate a sixth place in class for the Iron Dames squad.
After the flag, it was determined that the final pit stop for the #71 car incurred a penalty, dropping the car to fifth place in the standings, just behind #51 in fourth.

Giacomo Piccini, Team Principal, commented: “We are incredibly proud of all our drivers in the GT World Challenge race. We fought closely and both cars were seconds off the lead after six hours of hard racing. We scored important points for the Championship, and we look forward to another hard fight at the 24 Hours of Spa. The Iron Dames car achieved all its objectives first time out, completing the race and gaining positions, so Doriane, Sarah and Katherine have good reason to feel very satisfied with their place in history.” Turning to events in Brno, he added: “Michelle and Arno know how to fight, and they proved it in today’s fantastic race. Michelle raced thinking of the championship and she was able to extend her lead.”
The Iron Lynx team continues its racing odyssey with Ferrari next weekend with the European Le Mans Series and Michelin Le Mans Cup at Paul Ricard, plus Italian Formula 4 at Misano. Both Iron Lynx and the Iron Dames continue to inspire and engage as the team looks ahead to further success.