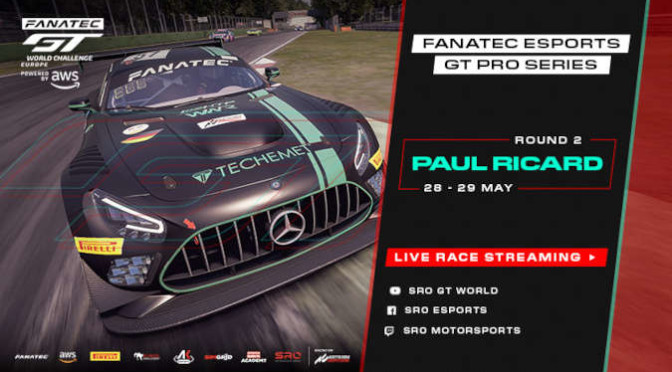 Indeed, the additional 30kg, 15kg and 10kg of Success Ballast for Monza’s top-three Pro and Silver finishers is bound to shake up the existing order.

SECONDS OUT, ROUND TWO!

Rougier and principal Pro challenger Dani Juncadella renew their virtual rivalry on Saturday afternoon, but will Circuit Paul Ricard prove as well suited to the Lamborghini and Mercedes-AMG which both carry additional Success Ballast this weekend?

After setting identical pole times around Monza’s high-speed layout the pair soon broke clear of the chasing pack to establish themselves as Fanatec Esports GT Pro Series’ early season pacesetters. However, the scale of Rougier’s achievement in beating AKKA ASP’s driver was perhaps underlined best in qualifying when six Mercedes-AMGs finished inside the top-eight. Rougier’s was the only Lamborghini.

One-lap pace isn’t everything though. Just ask Nicklas Nielsen who fought through from seventh to complete the overall podium and Pro points finishers aboard the Iron Lynx Ferrari.

The same applies to Tomita whose combination of speed and stealth helped WRT’s Audi seal Silver Cup honours in fourth overall after starting 15th. The Japanese driver is ‘rewarded’ at Paul Ricard with 30kg of Success Ballast.

Madpanda’s Ezequiel Perez Companc was also supremely consistent en route to second in the Silver class, while Benjamin Hites (Rinaldi Racing, Ferrari) would surely have been an overall top-six contender had he not ended lap one in 23rd. As it was, he powered back up the order to complete the Silver Cup podium in seventh.

Other promising qualifying performers included Philip Ellis – who lapped just 0.033s shy of pole – and Marvin Dienst, both of whose races were severely compromised by a classic Turn 1 incident on lap one. Expect them to be back near the sharp end on Saturday.

The same applies to Mirko Bortolotti who finished inside the top-10 despite starting from the pitlane.

Sainteloc Racing have selected Christopher Haase as their Pro entry instead of Adrien Tambay, who competed with the team at Monza, while another Audi Sport factory ace – Christopher Mies – takes over Attempto’s #66 R8 LMS GT3 from Mattia Drudi.

The team’s Silver entry also has a new name above its door: Max Hofer, who takes over from Tommaso Mosca. And SPS Automotive have switched Miklas Born for Yannick Mettler.

Elsewhere, a real-world change has also had a knock-on effect in the Fanatec Arena. Ricardo Sanchez’s move to Madpanda from Haupt Racing has seen the latter promote Gabriele Piana to their Silver sim entry. And there’s also a change in the Pro car where Maro Engel makes way for Vincent Abril.

One driver per Pro and Silver Cup team contesting Saturday evening’s real six-hour endurance race will also enter the Fanatec Esports GT Pro Series qualifying session and 60-minute race. Each of the 24 entries have been assigned a Fanatec rig for the entire season, which they can either set up using data provided by official SRO Esports partner, Coach Dave Academy, or according to their own preferences. They must also use the same manufacturer as their team has entered in real life.

Each driver must make one mandatory pitstop between minutes 25 and 35. Changing tyres is optional but at least one litre of fuel must be added. Success Ballast in the order of 30kg, 15kg and 10kg will be applied to both classes’ top three finishers from the previous round.

Pro and Silver class podium finishers will score either one, two or three points towards their respective real-world Overall Teams’ Championship total, meaning as many as 15 points are available across 2021’s five 60-minute rounds. There’s a genuine possibility, therefore, that virtual results will decide the outcome of a real-world international championship for the first time in motorsport history.

Watch live race coverage in the company of David Addison and Ben Constanduros from 13:20 CEST this Saturday on SRO’s Twitch, Youtube and Facebook accounts, as well as the Fanatec GT World Challenge Europe Powered by AWS website.