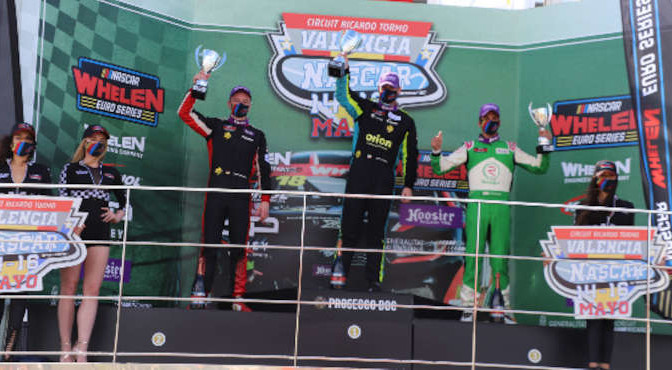 The international MotoGP track at Valencia seems to be tailor-made for the young German. In 2020, he won there, a success that allowed him to conclude the season as runner-up.
In 2021, he repeated his success at the 4.005 kilometres long Circuit Ricardo Tormo by finishing in third place on Saturday and coming second on Sunday.
With first and second place in the practice sessions on Friday and Saturday, Tobias Dauenhauer showed that he ranks among the favourites for success in the 2021 EuroNASCAR Series.
“Of course, I wanted to win here, but with temperatures over 30 degrees Centigrade, I was having problems with the front tyres and the set-up of my #50 Ford Mustang on both days. Nevertheless, I am very happy with the start of the 2021 EuroNASCAR season. The fact that we have been able to test extensively prior to the season paid off.”
Toine Hezemans (NL), a racing legend and the MOMO Motorsport Team Hendriks (NL) team principal, was happy with his German protégé: “In the heat of the battle, he made two slight errors under braking that probably cost him victory. Still, I think that when Tobias continues to shine like this in the next races, he has the chance to secure the 2021 EuroNASCAR championship title.”
Over 30 EuroNASCAR race cars were on the grid in Spain on Saturday and Sunday with fierce competition over 15 laps in both races, in temperatures of over 30 degrees. Of course, Tobias Dauenhauer’s excellent physical condition became apparent in such temperatures.