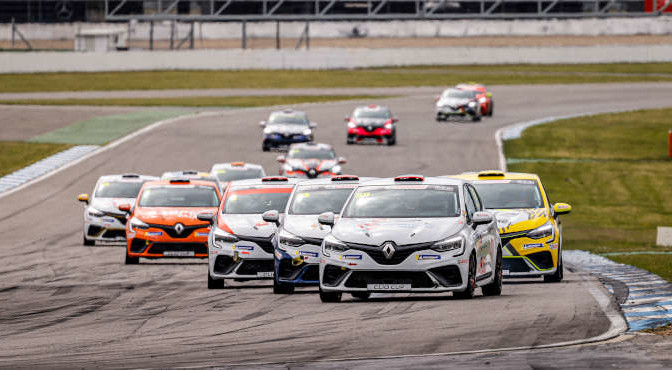 Nicolas Milan (Milan Compétition) reclaims the lead in Clio Cup Europe with his fourth win of the season sealed at the end of an exceptionally intense race at Hockenheim. From third on the grid, the Frenchman was followed to the line by Challenger Kévin Jimenez (GPA Racing) and Marc Guillot (Milan Compétition) while also making the most of the retirement of David Pouget (GPA Racing). At the same time, Jérémy Bordagaray (Team Borda Rally) picked up his first win in the Gentlemen Drivers Cup on the European scene.
The second qualifying session of the weekend was held in the rain on Saturday morning. Anthony Jurado (Milan Compétition) took the pole position ahead of David Pouget and Nicolas Milan. Romain Boeckler (BRS Racing by GM Sport) and Thibaut Bossy (TB2S) completed the top five.

However, the track was dry for the race. While Anthony Jurado held on to the lead in the first three turns, the magnificent five-driver-wide battle in the Parabolika turned in favour of Nicolas Milan before he was overtaken by Thibaut Bossy. At the end of lap one, Romain Boeckler went wide and lost ground.

On the next lap, Nicolas Milan answered back before the intervention of the safety car, caused by a puncture suffered by Lionel Viguier (TB2S). Thibaut Bossy took advantage of the restart to retake the lead at the end of the Parabolika. The duel was far from over when Thibault Bossy locked up under braking at the same spot on the following lap.

Nicolas Milan went on for a comfortable win ahead of Challengers Cup winner Kévin Jimenez. Marc Guillot finished on the third step of the podium thanks to his overtake of Thibault Bossy.

With his fourth win this season, Nicolas Milan takes command of the general classification for four points from David Pouget. Marc Guillot remains third ahead of Challengers Cup leader Kévin Jimenez. Laurent Dziadus extends his lead in the Gentlemen Drivers Cup from “Horn” (GPA Racing), who is now under threat from Jérémy Bordagaray.

Clio Cup Europe winner, Nicolas Milan also won in Group B ahead of Kévin Jimenez and Thibaut Bossy. With his win and the retirement of David Pouget, Nicolas Milan ends the first half of the season in this group with a 70-point lead from his rival.

Leader from start to finish in the Challengers category, Kévin Jimenez has also lengthened his lead with the retirement of his closes pursuer, Alexandre Albouy (GPA Racing). With their podium results, Mathieu Lannepoudenx and Jerzy Spinkewicz have closed the gap to second place.

In the Gentlemen category, Jérémy Bordagaray brought the winning streak of Laurent Dziadus (Team Lucas) to an end with his first win of the year thanks to his overtaking move on the category leader at the restart. Laurent Dziadus padded his lead in the general classification by finishing in front of “Horn”, who took third place on Saturday.

Romain Boeckler was the hard-luck driver of the day with his run through the gravel as Thibault Bossy took advantage to take the lead, but Marc Guillot wrested the victory away from him on lap nine as Tomáš Pekař looked on. This result provokes a unique situation where Thibaut Bossy, Marc Guillot and the Czech driver are on equal footing atop the Group C general classification.

Jerzy Spinkiewecz (Uniq Racing) doubled up in the Challengers category to strengthen his lead in the general classification but the Polish driver had to battle Paul Cocaign just until the last lap. The only German driver entered this weekend on home soil, Henrik Siebel (Shlaug Motorsport) completed the category top-three.

After three race meetings in as many weeks, the Clio Cup Europe racers will now enjoy a short break before heading to Misano (4-6 June).