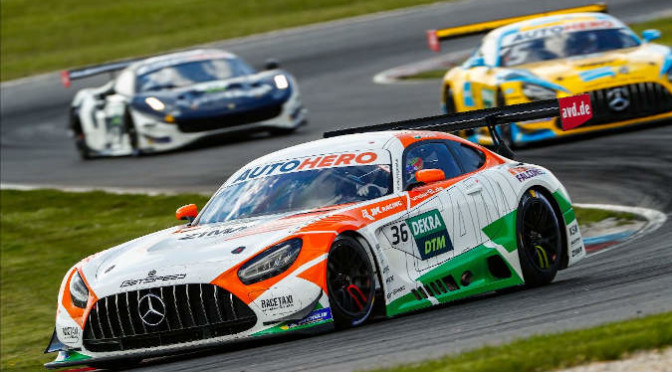 Arjun Maini sparked a little surprise on the third day of the official DTM test at DEKRA Lausitzring. In the morning session, the Indian came out on top with a time of 1m43.228s with the Mercedes-AMG GT3, run by Nürburgring-based Mercedes-AMG Team GetSpeed. Second fastest (1m43.234s) was the just 19-year-old Red Bull driver Liam Lawson (NZL) with the Ferrari 488 GT3 from Maximilian Götz (GER, 1m43.345s), who had posted the fastest time of the day with the Mercedes-AMG of the Haupt Racing Team on Tuesday and Wednesday.

In not fully dry conditions at the 4.570 kilometres long Lausitzring, Vincent Abril (MON, HRT-Mercedes-AMG) and Kelvin van der Linde (RSA, ABT-Audi) ended up in fourth and fifth place, making it three brands among the top five. The busiest driver in the morning was American Dev Gore, who racked up 35 laps with the Team Rosberg Audi R8 LMS, two more than van der Linde.

“We have a good learning curve,” Arjun Maini showed himself happy after his fastest time in the morning. “My team GetSpeed is adapting our Mercedes-AMG to my driving style more and more, that is really helpful for me. We are focussing on our own programme. Where we really are, we will find out during the season opener at Monza.”

In the junior series DTM Trophy, Swiss Lucas Mauron was the fastest on Thursday afternoon with a time of 1m54.156s with the Heide-Motorsport Audi R8 LMS. Dutch Stéphane Kox ended up a respectable second (1m54.311s) with the Ring-Racing Toyota GR Supra GT, followed by Finn Matias Salonen with the CVPG Mercedes-AMG (1m54.772s).

The three-day official test by DTM and DTM Trophy at DEKRA Lausitzring ends on Thursday evening. The season gets underway at Monza in Italy from 18-20 June.