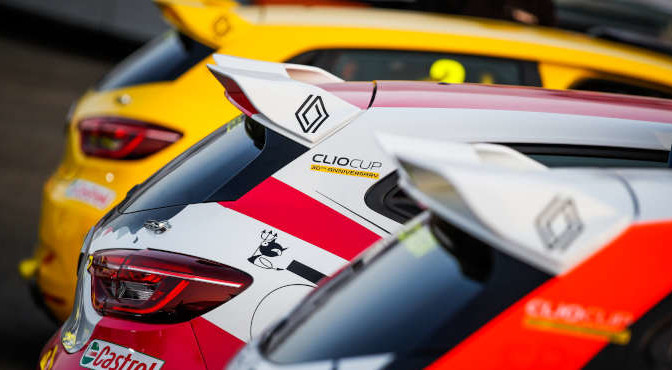 Twenty-seven competitors head to the Autodromo Internazionale Monza this weekend for the second Clio Cup Europe meeting of the season. More than 20 drivers will begin their 2021 campaigns in what is anticipated to be an exceptional first battle this year between the Italian and French stars of the category.
Four weeks after the Clio Cup Europe opener at Nogaro, focus now shifts to the “Temple of Speed” for the second stop on the 15-round calendar. The Italian Clio Cup field will enter the stage against some of the best French specialists who will challenge them on their home track and the iconic Monza circuit.

For the first round of Group A*, the field will be a mix of quality and quantity with many Italian standouts, including Simone Di Luca (Faro Racing) and Massimiliano Danetti (PMA Motorsport), who respectively won the Clio Cup Italia in 2018 and 2020.

Federico Scionti (Scuderia Costa Ovest), who finished third in the 2020 Italian Sport-Prototype Championship, will also bring his experience to the table, as well as Gabriele Torelli (Faro Racing) and Paolo Maria Silvestrini (Progetto E20 Motorsport). However, they will all have to discover the subtleties of the fifth-generation Clio Cup, as will journalists Lorenzo Baroni and Gianluca Sepe entered in the Press League.

Although the ten-time Clio Cup champion and the 2019 Clio Cup Spain title-winner have chosen not to enter Group A, their mission will be far from simple despite their impressive track records : Nicolas Milan has never raced at Monza, and it has been several years since the last time David Pouget competed in the Lombardy region !

2017 and 2018 Clio Cup Italia Gentlemen category winners Daniele Pasquali (Caal Racing) and Fabrizio Ongaretto (PMA Motorsport) will also be worth keeping an eye on as well as Ercole Cipolla (Faro Racing), who put in some strong showings last year.

Filippo Berto (Oregon Team), who finished second in the KZ2 category in the Andrea Margutti Trophy in 2020, will make his car racing debut in the category. This weekend will also see Giacomo Jelmini (PMA Motorsport) on track and he will definitely receive expert advice from his son Felice, who won the title in 2019 !

The Gentlemen Cup also promises to be hotly contested with an unprecedented encounter among several well-known veterans of Renault’s feeder series.

Runner-up in the 2019 Italian Gentlemen category, “Due” will aim to capitalise on his vast experience, as will his team-mate Quinto Stefana (Oregon Team). Alessandro Sebasti Scalera (Milan Compétition), who returns ten years after last competing in the Clio Cup and Frenchmen Denis Bernardi (GPA Racing) and Jean-Marc Thévenot (Milan Compétition), who finished third in Clio Cup France in 1995, complete the category’s entry list.