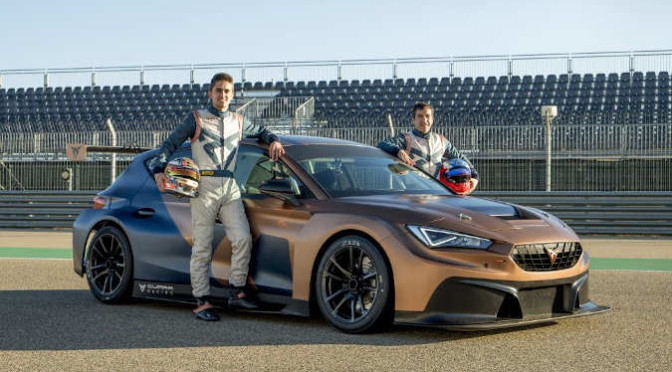 Azcona, 24, is one of the sport’s highly rated young talents with two WTCR wins to his name. Gené, who switched to touring car racing following considerable success in single-seaters, was a three-time winner in the FIA World Touring Car Championship and also scored three triumphs in the TCR International Series in 2015. The 50-year-old not only brings considerable pace to CUPRA’s WTCR customer racing programme, he’s also highly experienced.

Both will combine their WTCR efforts with campaigns in PURE ETCR, the all-electric touring car championship from Eurosport Events, the same promoter behind WTCR. In PURE ETCR, where Goodyear tyres are also used by all drivers, Azcona and Gené will do battle in the CUPRA e-Racer.

Top Hungarian team Zengő Motorsport, which helped Azcona score the first WTCR win for the CUPRA Leon Competición at MotorLand Aragón last November, will oversee the WTCR entries of Azcona and Gené, plus two other drivers to be announced in the coming weeks.

Happy Azcona plans world title fight
“I’m very happy to continue racing for another season with CUPRA in the WTCR,” said Azcona, who will also compete in TCR Europe alongside Evgenii Leonov, as part of the Russian Volcano Motorsport line-up. “After two years in the highest level of touring car racing with victories, my goal this year is to fight for the world title. I’m convinced that racing next to such an experienced driver as Jordi will be the best formula to be competitive and to get the best performance out of the CUPRA Leon Competición, a model perfectly suited to this series.”

CUPRA Leon Competición pace excites Gené
Gené, whose experience in touring car racing covers more than 25 years, said: “I’m very excited to be back racing with CUPRA and alongside a driver as skilled as Mikel. I’ve been involved in the development of the CUPRA Leon Competición, so I know what this model is capable of. It’s going to be an exciting season.”

Xavier Gavory, WTCR Director, Eurosport Events, said: “In Mikel Azcona and Jordi Gené, the 2021 WTCR grid welcomes another two exceptional talents, and we are naturally very pleased that CUPRA is continuing its WTCR participation. Driving for Zengő Motorsport, Mikel was able to demonstrate the potential of the CUPRA Leon Competición when he claimed the car’s first WTCR win in only its fourth race weekend. With Jordi, who has so much experience, supporting him, Mikel is in a very strong position to become the second King of WTCR aged 25 or under.”

Antonino Labate, CUPRA Director of Strategy, Business Development and Operations, said: “At CUPRA we’re convinced that youth and experience are the perfect combination to achieve our goals. Jordi Gené has a wealth of knowledge in the world of touring car racing, and Mikel is part of the next generation of young talent looking to be the driving force behind the transformation. In 2021, CUPRA will be present in 70 races planned for this season in world, continental and national TCR series and championships. Meanwhile, we’re continuing our electrification strategy with our participation in Extreme E and PURE ETCR, where Jordi and Mikel will also compete together.”

Zoltán Zengő, Team Principal, Zengő Motorsport, said: “We are very happy to keep working with CUPRA Racing and continue the progress we started making in 2020. It’s a very good feeling that a second CUPRA factory driver in Jordi Gené is joining our team to race alongside Mikel Azcona. He has very good experience and is very fast and we believe he will be able to help a lot the team and Mikel as well. We want to win the WTCR titles for Drivers and Teams and we will do everything possible as Zengő Motorsport to achieve this success. Over the next few weeks, we will announce the details of the two other Zengő drivers for 2021.”