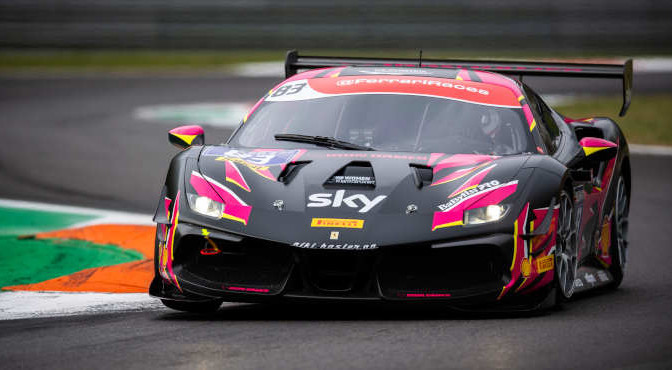 Michelle Gatting, representing the Iron Dames squad of female racers, had a weekend to remember, starting third in Saturday’s race and avoiding first-corner incidents before setting off in pursuit of the leaders. Well-plotted and calculated racing gave her second position after six laps, and a bold move at the first Lesmo put Michelle into the lead, which she held to the flag, winning by half a second. She lined up second for Sunday’s race after wet qualifying, and though she admitted to being too careful at the start, fought back from third once again with a confident move to take second place with just five minutes remaining in the race – and give herself the lead of the Drivers’ Championship.

Iron Lynx’s debutant driver, young German Arno Dahlmeyer, ran third in class in the first Trofeo Pirelli race and defended his position tenaciously to take a very encouraging fifth in class and eighth overall. His second race was no less impressive and after another strong start, he was in contention for second in class before an ambitious move at Parabolica sadly ended his race.

The Coppa Shell featured Iron Lynx driver Claudio Schiavoni who starred on the Saturday in dry weather, fighting from fifth to second position before a spin when he was fighting for the lead put him back to seventh. In Sunday’s race in the rain, he battled up to eighth place and despite a spin, finished in 10th place in very challenging conditions.

Giacomo Piccini, Team Principal, commented, “This weekend has been just the start we wanted for our 2021 campaign. I am happy for Claudio, who ran very competitively, and very impressed with Arno, who we believe will achieve great things this year. Michelle delivered another superb performance representing our Iron Dames squad, and she has put herself and the team exactly where we want to be – in the lead of the Championship.”

Next weekend is an intense one for the Iron Lynx team, who will compete in three Championships in two countries, with the European Le Mans Series and Michelin Le Mans Cup taking place at Barcelona, and the GT World Championship Endurance Cup at Monza.