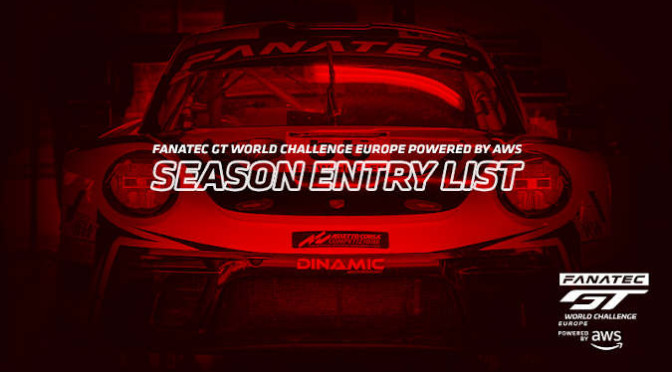 Fanatec GT World Challenge Europe Powered by AWS has revealed its full-season entry lists for the coming season, which will feature a significantly expanded Sprint Cup grid and continuity for the Endurance Cup.

The series will resume its familiar 10-round schedule this year, combining five Sprint weekends with five long-distance Endurance contests. The latter portion of the calendar includes the iconic Total 24 Hours of Spa, which returns to its traditional summer date on 29 July-1 August.

The Sprint Cup has attracted its biggest full-time grid since 2017, with 29 cars spread across eight brands set to contest every round of the short-format championship. Mercedes-AMG will be the best-represented marque with seven cars, while Audi, Lamborghini, Ferrari and Bentley all remain popular. The grid has been further bolstered by new entries from Porsche, McLaren and Aston Martin squads, with all three brands making a welcome return to the Sprint Cup.

Now entering its 11th year of competition, the Endurance Cup looks set for another ultra-competitive season. Nine brands will be represented in the long-distance championship, with BMW joining the marques that compete in the Sprint Cup. A stable field of 40 cars has committed to full-time competition, with additional entrants competing on a race-by-race basis and a significant grid expected at the Total 24 Hours of Spa. Once again Mercedes-AMG is best-represented, with nine of its AMG GT3 models set to run full-time.

What’s more, a total of 25 cars will undertake the complete Fanatec GT World Challenge Europe Powered by AWS schedule in 2021, an increase of seven compared with last year. This includes returns to full-season competition for Aston Martin, McLaren and Porsche, while Audi is the best-represented brand with seven entries committed to all 10 rounds. These are the teams that will compete for glory in 2021.

Aston Martin will return to full-season competition this year thanks to a pair of entries from Garage 59. Part of the series since 2016, the team clinched the Pro-Am title in the Endurance Cup last term and now has its sights set on earning a maiden series championship for the legendary British marque. It will launch a two-pronged assault, with its full-season Pro-Am entry running alongside a Silver Cup contender at all 10 events.

Audi’s presence on the grid remains as strong as ever, with three firmly established teams fielding seven full-season cars. Reining overall champion Belgian Audi Club Team WRT will oversee three entries, while front-runners Sainteloc Racing and Attempto Racing will each deploy two. With strong representation across both disciplines, Audi has more cars contesting the full 2021 season than any other brand.

Having chosen the Bentley Continental for its return to GT3 competition last year, Charly Bourachot’s CMR squad will continue to fly the flag for the British marque this season. The French outfit has committed a pair of cars to the Sprint Cup and will launch a solo effort at Endurance events.

BMW has committed to an increased effort this year. Walkenhorst Motorsport will field a pair of Pro cars in the Endurance Cup as it chases a second overall win at the Total 24 Hours of Spa, as well as a record-extending 25th triumph for the Bavarian marque. The familiar Boutsen Ginion Racing BMW will also be present at long-distance events, extending the Belgian squad’s commitment to the series with its M6 GT3.

Following a stellar 2020, Ferrari is well placed to earn more silverware this term. Its contingent is led by full-season efforts from Pro-Am squads AF Corse and Sky Tempesta Racing, while Rinaldi Racing will embark upon a complete campaign in the Silver Cup. Series newcomer Iron Lynx will defend the Italian marque’s overall Endurance Cup titles with a two-car effort, while there’s a welcome return for Kessel Racing, which will field a Pro-Am car at long-distance events.

McLaren will contest its first full-season programme since 2017 thanks to accomplished British squad JOTA, which will field a strong crew at both Sprint and Endurance events. Ben Barnicoat and Oliver Wilkinson will be ever-present, while 2016 Endurance Cup champion Rob Bell completes the trio at long-distance events. Among its objectives, JOTA will be looking to give McLaren its maiden win at the Total 24 Hours of Spa.

A significant Mercedes-AMG effort will be led by full-season programmes from AKKA ASP, Madpanda Motorsport, TokSport WRT and SPS automotive performance. They will be joined at Sprint Cup rounds by RAM Racing, while HRT and Winward Racing will add further cars at Endurance Cup events. These impressive numbers mean that Mercedes-AMG will be the best represented manufacturer in both disciplines this year.

Porsche will return to full-season competition this year, with Dinamic Motorsport fielding a 911 GT3-R to challenge for overall honours and series newcomer Allied Racing contesting the Pro-Am class. Additional representation at Endurance Cup events will see Dinamic field a Silver Cup challenger, while GPX Racing adds another top-tier entry as Porsche chases its third successive win at the Total 24 Hours of Spa.

Stephane Ratel, SRO Motorsports Group founder and CEO: “I am pleased to present competitive and diverse season entry lists for the 2021 Fanatec GT World Challenge Europe Powered by AWS season. The Sprint Cup has attracted its biggest grid for a number of years and I am grateful to the teams, both new and old, that have shown their commitment. Looking at the line-ups that have already been confirmed in the Endurance Cup, the level remains extremely high and I am sure the fight for the overall win will be closer than ever. We have seen a shift from the Am Cup towards Pro-Am, while the creation of our new GT Sports Cup programme has also attracted Bronze drivers. Finally, it is very pleasing to see all of the seven brands competing for the global Fanatec GT World Challenge Powered by AWS title on our European entry list and I am looking forward for what promises to be a fantastic season of racing.”