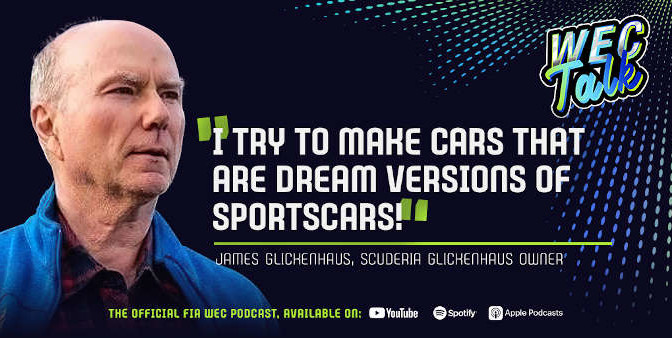 For the second episode of WEC Talk, we talk to James Glickenhaus – owner of Glickenhaus Racing and an American entrepreneur whose childhood dream was to one day compete at Le Mans.

In 2021, James’ dream will come true! Glickenhaus Racing will compete in the FIA WEC with a pair of Glickenhaus 007 Hypercars in the championship’s brand-new premier category.

But how did James Glickenhaus, who also has a very enviable car collection, first get into the automotive industry? The American businessman takes up the story…

“When I was around 10-years-old, I’d cycle 15 miles to a local dealership and stand outside with my nose pressed against the glass. Eventually the owner invited me in and I got to see the cars up close. Over the years, I regularly went back to the showroom and I learned a lot. I watched them take [Ferrari] 250 LMs that arrived into the shop and the shop owner and his mechanics would work on them to make them competitive. Then they’d send me to go and get parts! One of those cars would race successfully in Le Mans, in fact was the last Ferrari to win at Le Mans back in 1965.”

James added: “I’ve always loved a pretty car and when I saw the regulations for Hypercar… well, within those rules, I tried to create a beautiful car… I try to make cars that are dream versions of sportscars. I want the fans to look at it and think I want a poster of that on my wall!” The Glickenhaus Racing team have invested countless hours building the brand-new Glickenhaus 007 LMH, and Jim gives an interesting insight into what he believes is essential when building a successful sportscar to compete in the WEC.

The American explains: “The first thing that makes a great endurance car is that it’s comfortable – that you can see out of it, that it’s not so loud inside that it’s deafening, that you can talk on radio, the controls are easy and logical to reach and to use. If you start with that then you’ll be a lot faster than a car that doesn’t have those attributes. The one thing about the toughest endurances in the world… they teach you everything. You can start in beautiful sunshine, hit pouring rain – you encounter everything. You learn that basic things make the car work.”

What about how the Glickenhaus 007 Hypercar feels to drive? WEC Talk host Martin Haven also spoke to Australia’s Ryan Briscoe about how the new Hypercar handles following some recent tests at Monza and Vallelunga.

He explained: “It was a real eye-opener. I went there not really knowing what to expect. It’s a brand-new programme but I spent two days testing, and I have to tell you that it was great to drive! We still have a bit of work to do but we’ve had some really productive tests.”

Briscoe, who has been named as one of the drivers to compete with Glickenhaus Racing for WEC Season 9, also spoke about the comradery within the team. He took up the story:

“You’ve got all these different departments coming together and everyone is working well together. It’s a very professional operation. There’s so much passion and pride and that’s what really stood out for me. Everyone kept saying to me that this is the most fun they have had on a car programme in their life, and there’s mechanics and engineers from F1 and all different types of motorsport. For the whole WEC season, it’s just going to be a whole lot of fun.”