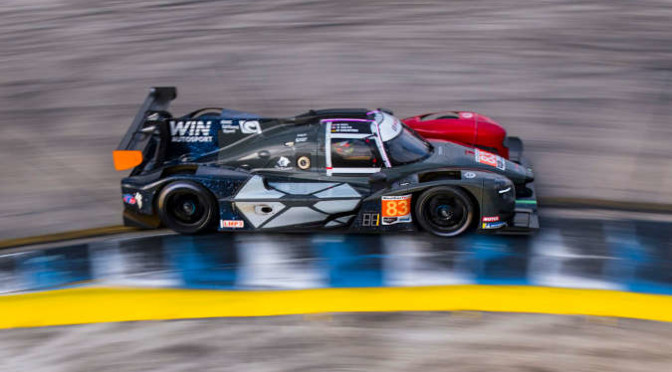 18-year-old Niklas Krütten from Trier enjoyed a successful debut at the 12-hour race in the IMSA WeatherTech SportsCar Championship, which took place this weekend in Sebring, Florida. Last year’s champion rookie in the Euroformula Open series impressed in free practice, setting consistently quick times, including the fastest lap time in the LMP3 class in two of the three sessions for his WIN Autosport team. However, after a strong showing, Krütten and his team-mates Matthew Bell (Great Britain) and Rodrigo Sales (USA) were forced out of the 69th staging of the iconic 12-hour race with one hour remaining. The team was running sixth with the #83 Duqueine D08 when it retired.

Krütten was the only German in the three LMP classes at the race in Florida. The young man from the Rhineland-Palatinate region will also contest the 4H Watkins Glen and the legendary Petit Le Mans at Road Atlanta.

The trio of drivers started Saturday’s 12-hour marathon at Sebring International Raceway from seventh place. A total of 37 teams and cars in five different classes demanded the utmost concentration from Krütten during his stints. The ADAC Stiftung Sport driver held his nerve and clocked the fastest times for his team on several occasions. A thrilling fightback saw the car running fourth in the LMP3 class for a while. However, technical issues and fierce battles on the 6.02-kilometre track saw the team drop back down the field. In the end, Krütten was forced to retire the car after eleven hours and 265 laps of racing. In total, he spent more than six hours – that is more than half the race – at the wheel of the number 83 Duqueine D08.

“Despite some technical issues and incidents on the track, that was easily one of the best and toughest races of my life. Although we had to retire from sixth place with just one hour remaining, I enjoyed every second of the race! My pace was good and I had taken the car into fourth place at the halfway point. The smell of the barbecues when I was driving through the night was a new experience! This race has immediately become one of my favourites and I hope I can race in Sebring again,” said Krütten after his debut for WIN Autosport in a Le Mans prototype.

After the race in Florida, another debut now awaits the young German. Krütten will make his first appearance in the European Le Mans Series on 18th April. He lines up in a Ligier JS P320 for the COOL Racing team in the LMP3 class at the 4-hour race in Barcelona.

You can also find all the latest news on Niklas Krütten on his social media accounts on Instagram and Facebook (both @niklaskruettenracing), Twitter (@NiklasKruetten), and LinkedIn (Niklas Kruetten).