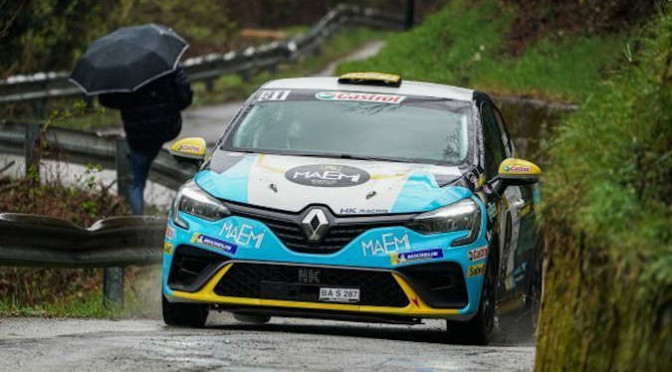 The 2021 Renault customer racing season got underway in earnest last week with the first round of the year for the Clio Trophy Italia during the Rally Il Ciocco e Valle del Serchio.

To start its second season with the Clio Rally5 in the best conditions, the Clio Trophy Italia organised a prologue to the Rally Il Ciocco e Valle del Serchio.

Ten tarmac special stages totaling 93.42 timed kilometres were on the route. After the SS1 was red flagged, the action heated up Saturday morning with Pierfrancesco Verbilli leading the way but Davide Nicelli responded immediately with two consecutive best times to head to the first service with a 0.2s-lead.

The battle continued in the next three tests but Davide Nicelli increased his advantage to 2.9s before the third and final loop. Despite his rival’s scratch time on SS8, Davide Nicelli went on for the win with a 9.9s margin of victory after dominating the final two stages. Mattia Zanin completed the podium ahead of Alessandro Bravi and Rémi Augier.

In addition to its class win, the Clio Rally5 of Davide Nicelli finished seventh overall among the two-wheel drive entries ahead of several Rally4 competitors.

On Frday, Renault’s customer racing department announced the launch of the Clio RX Trophy, a trophy dedicated to the Clio RX in the Catalan Rallycross Championship.

Contested exclusively on the Calafat Circuit, the Clio RX Trophy will be promoted by V-Line Organización and be in action in the five-meeting season of the very first championship dedicated to the discipline in Spain.

Powered by the 270hp 1.8-liter turbocharged engine derived from the production Renault Mégane R.S., the Formulas Alpine competing this year in the Formula Regional European Championship by Alpine certified by the FIA will take to the track for the first time in 2021 this week at Imola.

12 teams and 32 drivers will begin their preparations for the 2021 season during the four sessions scheduled for the first pre-season collective tests at the Autodromo Internazionale Enzo e Dino Ferrari on Wednesday and Thursday.

New programs around Clio RX will also be unveiled during the week.