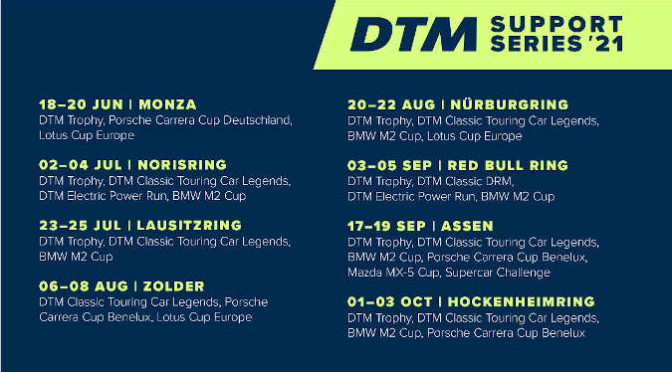 Next to the DTM, fans can look forward to an attractive mix of further race series on the support package. For the 2021 season, tickets for seats will be personalised and distributed contact-free, either to print at home or mobile on the smartphone (iOS and Android). The ITR is hoping to welcome as many spectators as possible during all events, but, like last year, is also prepared for restrictions including a limited number of spectators in coordination with the authorities.

Variety during the race weekends has been guaranteed: all the featured race series have two races each per weekend with DTM traditionally taking centre stage. Here, multiple brands will be on the grid including Audi, BMW, McLaren, Mercedes and Ferrari.

A new element is the BMW M2 Cup, in which not only all the cars are identical, but they will also be centrally prepared and run. That is making the cup to the ideal entry level for the major DTM stage, from the age of 16 already and with 365 hp. Already established as a junior race series is the DTM Trophy for production-based GT race cars. It will be present during seven rounds, the BMW M2 Cup will have six rounds. Moreover, in the course of the year, the Porsche Carrera Cup Benelux with three events and the Porsche Carrera Cup Deutschland with one event will be present during the race weekends as well. With the new, 510 hp strong 911 GT3 Cup, the Porsche Carrera Cup maintains its reputation as the world’s fastest one-make series.

The DTM Classic races, meanwhile, spark nostalgic memories of moments from DTM history. On six occasions, the Touring car Legends are part of the programme this season, with DTM touring cars from the 1980s and 90s and selected drivers from back in the day shining in particular. A highlight can be expected at the Red Bull Ring in Austria (3-5 September) when the race cars from the ranks of the defunct DRM series (Deutsche Rennsport-Meisterschaft) from the 1970s will be staging a revival.

DTM Electric: in action at Norisring and Red Bull Ring

During the events at Norisring (2-4 July) and at the Red Bull Ring (3-5 September), the future is in focus. Here, DTM and its technology and innovation partner Schaeffler will be presenting the DTM Electric demonstration car during dedicated Power Runs. From 2023, DTM Electric is planned as an additional separate race series, marking the start of a new era for fully-electric sustainable motorsport.

The Lotus Cup Europe, the Mazda MX-5 Cup and the Supercar Challenge round out the support package. In the process, the event at Assen in The Netherlands (17-19 September) will have the most comprehensive motorsport programme of the DTM year with seven race series.

“We as the organisers are very proud of having realized an innovative and varied event concept for the 2021 season. Of course, fans are a very central element of it and we are looking forward to finally welcoming motorsport enthusiasts from all over Europe during our events as soon as the situation allows,” says Frederic Elsner, director event at the DTM organisation ITR.