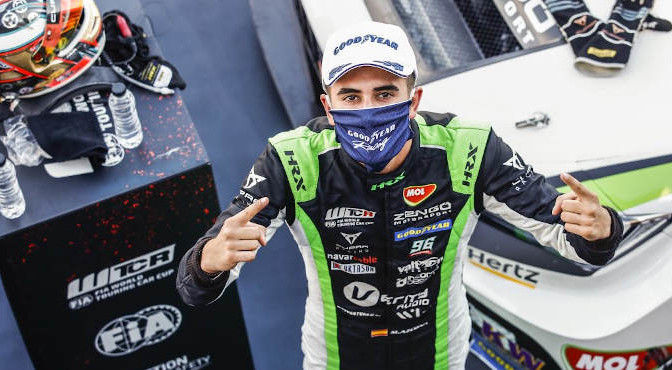 Mikel Azcona is preparing for the upcoming season hoping for more WTCR − FIA World Touring Car Cup success after completing 2020 with more starts and more wins than any other TCR category driver.

The 24-year-old Spaniard scored the maiden WTCR win for the Goodyear-equipped CUPRA Leon Competición at WTCR Race of Spain last November, which was also the first victory in the series for Hungary-based Zengő Motorsport.

As well as his WTCR triumph at MotorLand Aragón, Azcona scored 10 further wins out of 32 starts in WTCR, TCR Europe, TCR Italy and Campeonato de España Resistencia. And of the 11 weekends he was in action, eight were consecutive.

How good was it to race so often?
“I liked it a lot because you are driving almost every day and this is very good because you are improving in every moment. But at the same time, especially with the COVID-19 situation, you needed more hours to travel. Then when I arrived home I cleaned the overalls, cleaned all the clothes and the next day I would fly to the next race. There was stress but I really liked it because I love this sport. In fact, I want to drive every weekend if I could!”

Lots of races in different series meant lots of changes of cars, what was that like?
“With WTCR it was the CUPRA Leon Competitión, in TCR Italy it was another CUPRA Leon Competitión, but in TCR Europe and CER it was the previous CUPRA model. Although it was a different car each weekend, honestly it was not hard for me. I know pretty well the old model, how to drive it on the limit, having driven it for four years. It was also easier in TCR Europe because it was the exact car that I drove in WTCR [in 2019]. But the new CUPRA is a very different car and I was still learning the best set-ups and how to prepare the car in the perfect way. But, at the same time, one of my best things as a driver is that I can get used to the car very fast and I can go really fast in a very short time.”

Exactly how does the new CUPRA compare to the previous CUPRA?
“There are a lot of small things. The brakes are from another brand and the pads gave a different feeling. We have the Hewland gearbox and how to change the gears is more gentle. We also have more downforce so we are faster in high-speed corners. With the old model we were struggling on the high-speed corners with understeer. The new car is also more stable because it’s five centimetres longer between the front and rear axle. You battle less than you did with the old model and you can adjust much more things with the set-up. But you have to understand it and prepare it and we also had the new Goodyear tyres. We didn’t do any pre-season testing with the Goodyear tyres, we just went to Zolder for the first WTCR race. Although it was very difficult for us, finally I was happy because I finished the WTCR season with a very good feeling from the car, almost a perfect set-up and that’s very good for my 2021 season.”

What did you typically eat and drink to cope with the intensify of your schedule?
“I have a physical trainer who suggested to me what I could eat and drink. I normally ate high-protein food like chicken and carbohydrates for the energy, things like pasta. I also drank plenty of aquajuice, a typical Spanish drink, just to be hydrated.”

Did you ever get tired?
“The last race weekend, the final round of the Campeonato de España Resistencia in Aragón, I had a problem. I was in my room sleeping but at five in the morning I felt really bad in my stomach and on the Sunday I was throwing up. But, at the same time, I had to do both races just to win the championship with my team-mate Evgenii Leonov. It was a very hard day for me with no food in my body, with no energy but, at the same time, having to drive. We won the championship but after 11 weekends, my body felt a bit tired and the reason why I felt like this in Aragón.”

Was there a lot of mental strain?
“Especially in WTCR you need to be very prepared, to be very focused. It’s more hard for the drivers for the mental things. But I can manage this side very well and I didn’t have any problems.”

What was the best moment of your year?
“I had two best moments. My best was when I won the second race in Aragón [at WTCR Race of Spain]. It was the reflection of a lot of hours working with my engineer, my team, just to improve as fast as possible in a very short period of time. I remember at Zolder going directly to the TV after qualifying to see I was the last driver. This was a very bad feeling, we were in a bad situation. So, to win in WTCR after this was very difficult. When you are winning a race in a world championship after starting the season like we did is amazing. The other best moment was winning both TCR Europe races at Spa in the rain, in conditions that were very difficult, from 13th position. This was crazy because I had never had something like this. It was also very good mentally. After Zolder I was in my house thinking, ‘Mikel, maybe you are not on the highest level anymore because we were battling for 20th position’. So, the result at Spa gave me good motivation for my next WTCR race.”

How are your plans coming together for 2021?
“I will try to continue in WTCR. That’s my goal and I am training very hard to have the best preparation. If we can start 2021 with the feeling we finished 2020 we are going to start battling for the first position. And if we can start like this then we can be battling for the championship at the end of the year. It’s 95 per cent [certain] I will battle for the title. It’s the goal.”