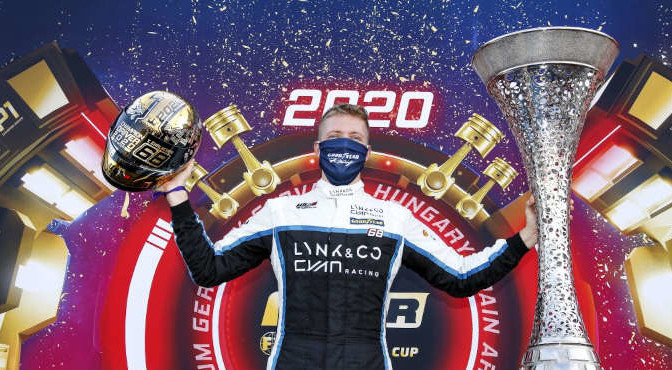 In the 2020 WTCR Marketing Report published by promoter Eurosport Events this week, research from Nielsen Sports also reveals that a season-high cumulative audience of 62.3 million watched Yann Ehrlacher crowned the King of WTCR at the title-deciding WTCR Race of Aragón last November.

The report also includes details of the 11 new outlets that joined the WTCR’s roster of broadcast partners to make it 55 channels across 29 broadcasters in 135 markets, the series’ best ever.

TV: Broadcast time increases as the amount of broadcasters reaches its greatest number ever
Research from Nielsen Sports included in the 2020 WTCR Marketing Report reveals the following:

*The overall cumulative TV audience was 330.3m (including WTCR and Esports WTCR)
*Despite fewer races than in 2019, broadcast time rose by 13% due to there being more broadcasters
*The title showdown at WTCR Race of Aragón generated the highest cumulative audience of 62.3m followed by WTCR Race of Hungary at nearly 55m
*Esports WTCR increased the WTCR’s global appeal with a dedicated TV programme of six episodes shown by broadcasters around the world

Social media: Exclusive content delivered to fans to make up for closed-door events
The WTCR’s social media fanbase, which reached 1.4 million, was particularly engaged in 2020 with more insight and exclusive content made available to compensate for the fact that WTCR events took place behind closed doors or with very limited spectator attendance allowed. The appetite of fans was evidenced by video views reaching 78.8 million as the title fight was once again decided at the final event of the season.

Xavier Gavory, WTCR Director, Eurosport Events, said: “Despite the COVID-19 pandemic cutting the planned number of events from 10 to six for a Europe-only schedule, cumulative audiences remained strong while broadcast time increased with the Pre-season Esports WTCR Championship added to the offering available to global broadcasters, which also grew to 29, through 55 channels, the highest yet. There were also gains in digital coverage reach, all of which underlined the continued appeal and success of WTCR. The challenge now is to build on these results in 2021 and works is already underway to do just that while we wait the start of the new season.”

The 2021 WTCR season is due to begin with WTCR Race of Germany at the legendary Nürburgring Nordschleife from June 3-5.