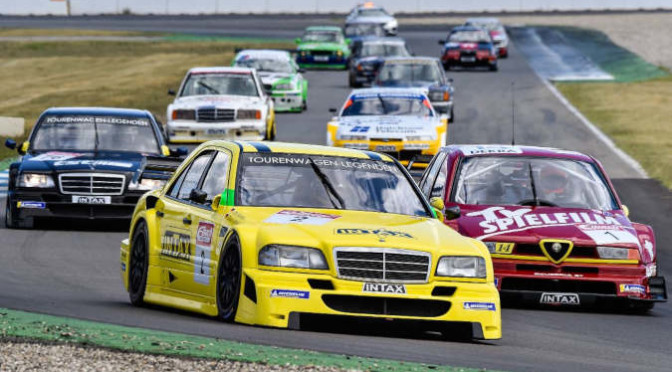 DTM Classic is putting the legends of touring car racing into the limelight again. On six race weekends of the popular DTM, the legendary touring cars from the 1980s and 90s will be providing a nostalgic delicacy to be savoured by multiple generations. Next to the DTM as the feature act and the junior race series DTM Trophy, DTM Classic is one of the pillars of the DTM platform. On every race weekend, the two 30-minute races of the Touring Car Legends as well as qualifying will be broadcast live on the online platform DTM Grid (grid.dtm.com). The Automobilclub von Deutschland (AvD) is coordinating the classic car activities supporting the DTM.

Legendary touring cars from the years between 1984 and 1996 like AMG-Mercedes C Class, Audi V8 quattro, Alfa Romeo 155 V6 and Opel Calibra V6 or BMW M3, Ford Sierra Cosworth and Mercedes 190E Evo are all represented in the fascinating field. Meanwhile, touring car legends like three-time DTM champion Klaus Ludwig or former champions Kurt Thiim and Volker Strycek, the latter being the inaugural DTM champion, are showing that they have lost none of their skills.

The Touring Car Legends (TWL) will get their season underway on the DTM platform at the Norisring, the Nuremberg street circuit steeped in history, at the beginning of July. The next events at Lausitzring, Zolder (BEL), Nürburgring and Assen (NED) as well as the finale at Hockenheim are also held at renowned race tracks that are part of DTM history.

ITR partner AvD has taken on the coordination of the DTM Classic activities with its vast experience, among others from the organisation of the traditional AvD Oldtimer Grand Prix at the Nürburgring as Europe’s largest event for historic (race) cars. “When the Touring Car Legends will be racing on six DTM weekends, spectators in front of the screens and hopefully also at the race tracks again can celebrate a reunion with the motor racing legends from the past. When a packed field of legendary race cars is completing its laps, it will be an experience full of emotion for motorsport fans, but also for the entire family,” says Lutz Leif Linden, secretary-general of the AvD.

“DTM Classic is the ideal environment for our Touring Car Legends. We are delighted to be a substantial element of the attractive programme on six race weekends of the DTM,” says Jörg Hatcher, managing director, Tourenwagen Legenden GmbH. “Joining the ranks of Europe’s most successful motorsport platform is a real highlight for our participants as well. The majority of our cars has already written history in an unforgettable way.” The burgeoning Touring Car Legends series will be entering its third season in 2021.