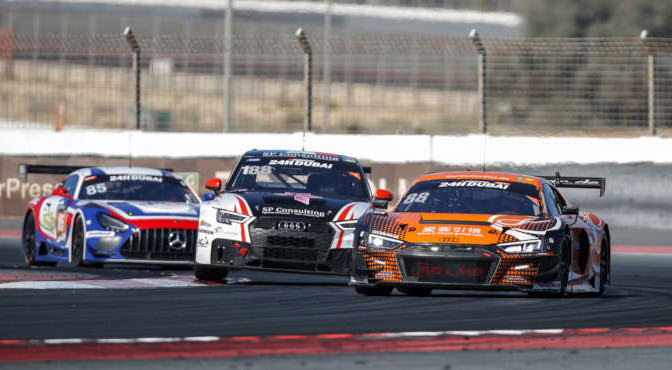 This week, more than 250 drivers across 54 cars representing 12 brands and 33 nationalities will kick off 24H SERIES powered by Hankook endurance racing action in 2021 with the 16th running of the Hankook 24H DUBAI.
Entry list 24H DUBAI 2021

The Hankook 24H DUBAI, the oldest and most celebrated event of Dutch promoter CREVENTIC, has been held at the state-of-the-art Dubai Autodrome since 2006, and is traditionally among the first circuit-based endurance events of every New Year. 2021 will be no different, with teams and drivers already on-site at the Dubai Motorcity-based venue ahead of the event on 14-15-16 January.

In the sure-to-be hotly contested GT3 category, 17 cars have already been confirmed representing Mercedes-AMG, Porsche, Lamborghini, Audi, Dodge and McLaren. Among them are five former outright GT winners of the Hankook 24H DUBAI.

The newly established Haupt Racing Team will be Mercedes-AMG’s official customer racing entry in Dubai, replacing the record five-time winning Black Falcon that last year confirmed it was stepping back from GT3 competition. Alongside many key members of the Black Falcon team, HRT, which will run two Mercedes-AMG GT3 Evos this weekend, also boasts three-time winners Hubert Haupt and Khaled Al Qubaisi on its driver line-up.

Combined, these five teams have taken victory at every running of the Hankook 24H DUBAI, bar one, since 2012.

Also of note in the GT3 class is the GRT Grasser Racing Team, which will contest this year’s event with a loan Lamborghini Huracán GT3 Evo. The Austrian team secured outright pole position at the event in both 2018 and 2019, and will be looking to make history in 2021 by becoming the first GT team to take three outright pole positions at the Hankook 24H DUBAI.

HRT Performance (not to be confused with Haupt Racing Team) is one of three teams with multiple Porsche 911-II Cup entries, the others being MRS GT-Racing and Speed Lover. The two-car entry from MRS GT-Racing is particularly noteworthy: the German team has taken multiple class wins at the Hankook 24H DUBAI over the years, and in 2021 will field three-time overall event winner Jeroen Bleekemolen on its driver line-up.

Across in the TCE division, 14 teams representing CUPRA, Audi, Volkswagen, Ginetta and BMW have already begun setting up in the Autodrome paddock. Autorama Motorsport by Wolf-Power Racing, now a two-time Overall TCE Teams’ champion in the 24H SERIES, secured victory in Dubai first time out in 2019, while AC Motorsport, which will this year compete with two Audi RS 3 LMS’ for the first time, secured its first TCE win in the 24H SERIES at last year’s event.

Impressively, since the TCE division was officially recognized by CREVENTIC as part of the 24H SERIES for 2018, no TCE team or driver has ever won more than once at the Hankook 24H DUBAI.

Representing the United Arab Emirates at their home event, GPX Racing, which made history last October by winning the first official Coppa Florio since 1981, will challenge for the overall win with its Porsche 911 GT3 R. Last year’s GT4-class winner Dragon Racing returns to the class with a Mercedes-AMG GT4 in 2021, and RKC/ZRT will challenge for TCR honours with its Audi RS 3 LMS.

Following two Unofficial Private Test sessions for competitors on Wednesday 13 January, teams and drivers will celebrate the return of 24H SERIES competition in 2021 with the annual Welcome BBQ from 18.15 hrs local time that evening. On Thursday 14 January, official Free Practice for TCE and GT competitors at the 2021 Hankook 24H DUBAI will begin at 09.45 hrs and 11.50 hrs local time respectively. Both sessions will be followed later that afternoon by Qualifying and Night Practice at 14.30 hrs and 18.00 hrs local time respectively. The green flag for the 16th annual running of the Hankook 24H DUBAI will drop at 15.00 hrs on Friday 15th January with the 24-hour event race set to run uninterrupted until 15.00 hrs on Saturday 16th January. Motor racing action will be further bolstered in Dubai with four F4UAE sprint races.

Full coverage of the two 30-minute Qualifying sessions, the 90-minute Night Practice, and the full 24-hour race proper will be available via live stream on the 24H SERIES’ official YouTube channel. Full commentary will be provided by radiolemans.com, which begins its 10th partnership year with CREVENTIC in 2021. Regular event updates will also be provided via the 24H SERIES’ official Twitter (@24HSeries), Facebook (24H Series) and Instagram (24H Series) accounts.