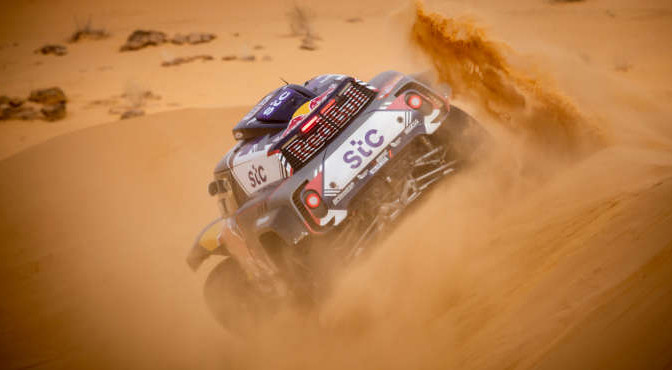 Sotnikov wins marathon Dakar stage to extend gap as Quintero up to second.

- After Saturday’s Rest Day gave the convoy a chance to rejuvenate, the remaining competitors covered 737km with 453km of that a special stage from Ha’il to Sakaka.

- In the car category, home driver Yazeed Al-Rajhi won the stage by 48 seconds from Frenchman Peterhansel with Nasser Al-Attiyah and reigning champion Carlos Sainz within three minutes of Al-Rajhi.

- Thirteen-time champion Peterhansel extended his lead over Qatari Al-Attiyah to 7m53s with Sainz 41m06s back as Polish driver Kuba Przygoński and South African Giniel De Villiers remain in the top 10.

- Peterhansel, 55, revealed: “I hit a rock with 40km to go and broke a rim. We spent a long time changing the wheel, it was quite hard. It’s a pity because we were going quite fast at the intermediate time checks and we could have put more time into our rivals today.”

- Teenage sensation Quintero ended seventh on the day behind Chilean Chaleco Lopez, however his rivals fell away enough for him to move up to second overall 8m41s behind Poland’s Aron Domzala.

- Californian Quintero, 18, said: “There was no dust out front and my co-pilot Dennis (Zenz) did an amazing job. The car ran absolutely flawless and it was a smooth day like we wanted.”

- In the bikes, former champion Sam Sunderland finished fourth behind Ricky Brabec and moved up to third overall 2m11s behind overall leader José Ignacio Cornejo Florimo with Australian Toby Price one second behind the Chilean as he seeks a third Dakar title.

- Briton Sunderland, 31, said: “It’s really difficult to know where the other guys are so you’re just pushing and pushing. You don’t see anybody for three hours. I just concentrated on keeping a good rhythm and not make any mistakes. The bike’s working really well and I’m happy to be here racing.”

- Australian rookie Daniel Sanders, who ended fifth, added: “I was having a pretty good day until the last 100km. I was leading out Brabec and Barreda and heading up a dune. There was this one rock in the sand dune somewhere, which I hit with my front wheel. That threw me head first straight onto the dune. I was a bit wounded and Ricky stopped to make sure I was alright. I bent the front wheel and the bars a little. Tonight I’ll have to straighten up the spokes.”

- Monday’s Stage Eight sees the field head from Sakaka to Neom with 375km of special stage.