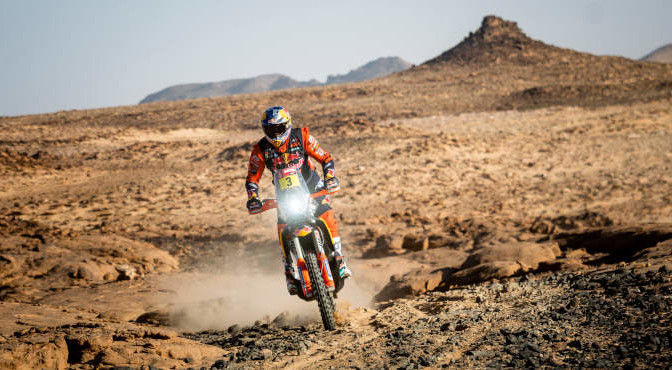 - Price, 33, said: “It’s like a yo-yo at the moment, I’m either right at the front or at the back. Navigation makes it difficult to lead a stage out.”

- In the car category, Toyota Gazoo Racing driver Al-Attiyah came in first ahead of South African teammate Henk Lategan with Stéphane Peterhansel third as the Frenchman retained his overall lead.

- Al-Attiyah, 50, said: “We really pushed a lot and made no mistakes. Mathieu (Baumel, co-driver) did good navigation. Everything on the car is working really well.”

- Peterhansel, 55, added: “A big mix of everything. We got a puncture on the rocky sections, so I held back a bit after that. Then we picked up speed in the canyons.”

- Sotnikov, 35, said: “Navigation has been a big challenge at this Dakar. We’re paying attention to find the right direction and checking the road for any traps. So far, our tactics have been working.”

- Lopez, 45, said: “The kilometres were very tough. We suffered a puncture. My co-driver was excellent with the navigation on the second part. We were able to go fast to the finish line.”

- Wednesday’s Stage Four sees the Dakar convoy head to Riyadh with the competitors covering 856km – 337km to the Saudi Arabian capital against the clock.