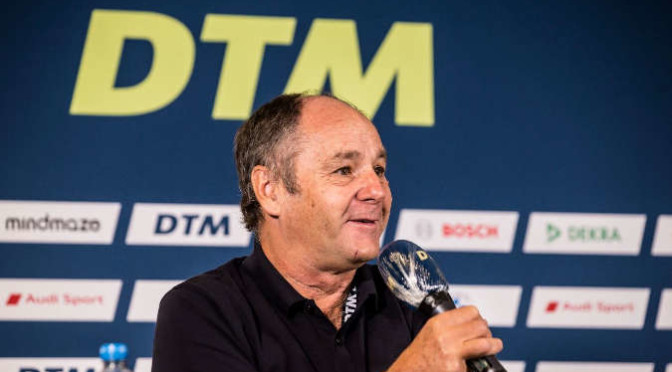 In an exclusive interview with web portal DTM.com, Gerhard Berger, who has been at the helm of the DTM since 2017, speaks about the five pillars of the wide-ranging DTM platform as well as his goals and expectations, chances and challenges. The ex-Formula 1 driver, who is taking over sole responsibility for the platform from 2021, is looking back upon the 2020 season, during which the DTM had an enormous challenge to deal with, not in the least as a result of the Covid-19 pandemic.

About the DNA of the DTM: high-class professional racing with one driver per car

From next season, the DTM will be run with powerful GT sports cars. “My big goal is 20 cars with at least five brands, strong drivers and a battle for the title that goes down to the wire, the final race,” Gerhard Berger says. With the change of the regulations, as Berger points out, the DTM is offering more opportunities for the fans to identify themselves thanks to a greater variety of brands as well as different engines with different sounds. “The DTM is about high-class professional racing and fierce competition with one driver per car and pit stops without a minimum pit stop time,” the 61-year-old describes the DNA of the DTM that was introduced in 1984.

In the interview at DTM.com, Gerhard Berger also speaks about the transition in the automotive industry and among sponsors. The fully electric demonstration car presented at Hockenheim in November is met with wide acclaim. “The next twelve to sixteen months will be all about getting a prototype ready to run at the race track,” is his planning. In the process, sustainability is playing a major role for Berger. “Our goal is to implement more sustainability step by step. Between 2025 and 2030, we want to become carbon-neutral, and not just concerning the race cars at the track, but across the entire platform, including the partners that are represented there.” From fully electric race cars via hybrid technology up to synthetic fuels and hydrogen: Gerhard Berger is considering motorsport and also the DTM as a way to accelerate technical innovation. “Therefore, it is important to be able to showcase as many technologies as possible on the DTM platform,” the DTM boss says.

DTM platform with five pillars for young and old

Berger describes the wide-ranging DTM platform as a means to deliver the fascination of motorsport for all generations. It is “crucial to get the fans on board and to involve them. Here, fascination is the key element.” First and foremost, so to say as ‘hardcore motorsport’, there is the top-level competition in the DTM, but also the successfully launched junior race series DTM Trophy with production-based GT sports cars as well as the BMW M2 Cup that has just been announced. Increasingly significant is also DTM Classic with historic race cars, also raced by many stars from the past, an element that is not just appealing to older generations. Next to the future DTM Electric, DTM Esports is aiming at younger motorsport enthusiasts. “In DTM Esports, young fans can realise their potential and actively participate, becoming a part of the DTM as a result,” Berger says.

Berger in the interview at DTM.com: no positive Covid-19 case and a perfect René Rast

In the interview at DTM.com, the ten-time Grand Prix winner is also looking back upon the past DTM season. “2020 was a difficult situation. However, we have succeeded in running the nine events as scheduled without any positive Covid-19 case”, a relieved Berger says, hoping that spectators will be allowed to visit the circuits again next season. From a sporting perspective, the unequal battle between Audi and BMW left Berger disappointed, but the open and thrilling battle for the title until the final race excited him. About René Rast, now a three-time DTM champion, Berger is full of appreciation: “For me, René Rast combines all the elements that define a perfect race driver and he is a nice bloke on top of that.”