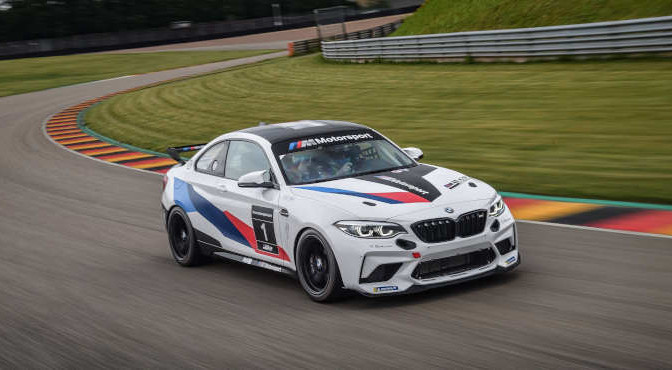 Expansion for the DTM platform: the BMW M2 Cup will feature exclusively on the support package of the popular DTM series at least in the years 2021 and 2022. In this new one-make series, young drivers in particular are to get the chance to prove their skills on the grand DTM stage. The competition car is the BMW M2 CS Racing, the new entry-level model from BMW M Motorsport for customer racing. The motorsport-experienced team from tolimit as a general contractor will take care of the preparation and running of the race cars in the BMW M2 Cup. Furthermore, the BMW M2 Cup provides the unique opportunity of a double graduation on the same platform: from the BMW M2 Cup into the DTM Trophy as a successful race series for young talents with production based GT sports cars and from there directly into the DTM, professional racing with powerful GT sports cars.

“With the BMW M2 Cup, we want to provide an attractive, affordable platform for talented drivers, allowing them to prove their driving skills in the DTM environment and to allow them to make the step up if they are successful,” says Thomas Felbermair, Vice President Sales and Marketing BMW M GmbH.

In 2021, the BMW M2 Cup will have a total of twelve races at the following circuits: the Norisring (GER), the Lausitzring (GER), the Nürburgring (GER), the Red Bull Ring (AUT), at Assen (NED) and Hockenheim (GER). The most successful drivers will receive support and get the chance to make competitive appearances in other BMW race cars in subsequent years. This can apply to the customer racing area but they would also potentially be within striking distance of the BMW Junior Team that was rebooted in 2020. This additional platform broadens the range of candidates from which the BMW Motorsport management can select new members of future BMW Junior Teams.

“With the new BMW M2 Cup, young talents can already present themselves at the high-quality DTM platform from an early stage already. Another unique thing is the opportunity for the successful drivers to graduate twice: first of all into the successful junior race series, the DTM Trophy with production-based GT sports cars, and from there on straight into professional competition, the DTM with powerful GT sports cars. The new BMW one-make series is a great gain for the DTM platform,” says Frederic Elsner, director event at the DTM organisation ITR. “The series’ premiere is already promising quite a spectacle, because the BMW M2 Cup will have its first race on Bavarian soil, so home territory, at the exciting Norisring in Nuremberg.”

The concept for the BMW M2 Cup is absolutely focused on equal opportunities and transparency. Centralised preparation and the inclusion of technical skills from dealers certified by BMW M Motorsport, and the allocation of cars before each event, clearly show that the priorities for this one-make cup are driver training and honing individual skills. The role of main contractor is taken by the team of experts from tolimit GmbH, a company that has made a name for itself in various areas of customer racing and talent development over the past 25 years.

More details about the race series and the registration process are published on the website https://bmwm2cup.com. Queries regarding the BMW M2 Cup can be directed to the e-mail address info@bmwm2cup.com at any time.