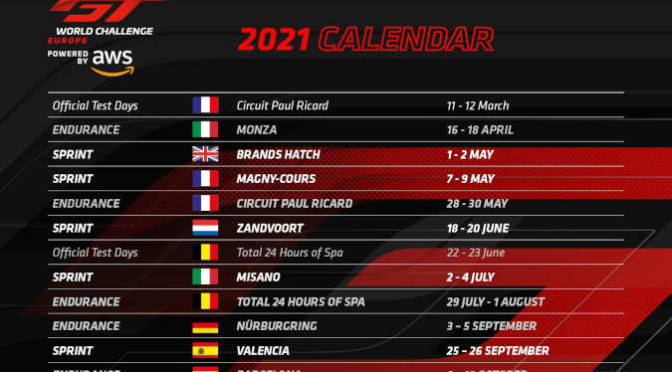 GT World Challenge Europe Powered by AWS has put the finishing touch on its 2021 calendar with the addition of Circuit Ricardo Tormo as the deciding Sprint Cup contest on 25-26 September.

The 4km track on the outskirts of Valencia will form part of a Spanish double-header, with the final Endurance Cup round taking place two weeks later at Circuit de Barcelona-Catalunya (8-10 October). With reduced logistical requirements, this will support the environmental and cost-saving initiatives that SRO Motorsports Group has prioritised for the 2021 season.

Named in honour of the late motorcycle racer Ricardo Tormo, the circuit staged its first competitive action in 1999 and has since established itself as a popular destination for a variety of single-seater, motorcycle and GT categories. SRO last visited the track in 2004, when Valencia staged the second round of the FIA GT Championship.

It is the final venue confirmed for the 2021 season and the only new addition to the calendar. Indeed, the coming campaign will see GT World Challenge Europe Powered by AWS return to familiar territory, with 10 race weekends split equally between the Endurance Cup and Sprint Cup formats.

The year will officially begin with the traditional test days at Circuit Paul Ricard on 11/12 March. Monza will resume its role as season opener with an Endurance event on 16-18 April, followed by back-to-back Sprint Cup contests at Brands Hatch (1-2 May) and Magny-Cours (7-9 May).

Circuit Paul Ricard will stage its annual 1000km Endurance Cup round on 28-30 May, followed by Sprint events at Zandvoort (18-20 June) and Misano (2-4 July). The official Total 24 Hours of Spa test days will also take place during this busy period, with cars on-track at the Belgian venue on 22/23 June.

The main event takes place on 29 July-1 August, returning the Total 24 Hours of Spa to its rightful summer slot following this year’s one-off autumn edition. After a five-week break the action will resume on 3-5 September when the Nürburgring stages a three-hour race. The season will then conclude in Spain with the Sprint Cup decider at Valencia and the Endurance finale at Circuit de Barcelona-Catalunya.

With the calendar complete, fans and competitors can look forward to an exciting campaign as GT World Challenge Europe Powered by AWS prepares for a brighter 2021.