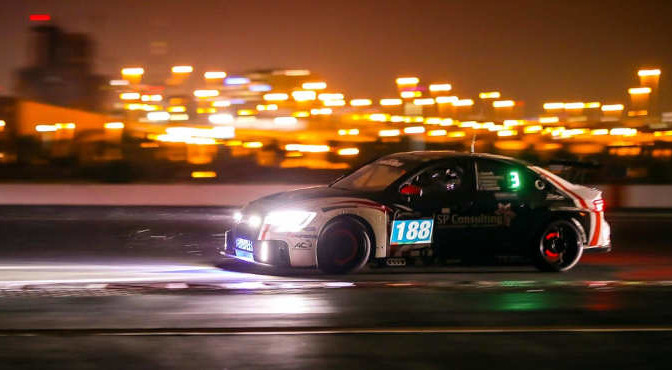 With just under six weeks to go before the 2021 Hankook 24H DUBAI, more than 50 entrants have booked their starts on the starting grid, with most having also started shipping their cars and equipment out to the United Arab Emirates.

On 14-15-16 January, the Dubai Autodrome is set to host the 24H SERIES powered by Hankook season opener for the 16th year in succession. In response to the current global situation, the Government of Dubai has worked without pause to ensure the Emirate can re-open safely to international travellers. Hotels, restaurants and shopping malls, as well as the Dubai International Airport, have begun re-opening under strict new health and safety mandates. These include contactless check-in/out and bill payments, readily available temperature checks, and even more rigorous sanitation standards. The Dubai Autodrome meanwhile, which has also re-opened, now boasts more hand sanitizer and temperature check stations in accordance with new Emirates Motorsport Organization (EMSO) and Dubai Sports Council (DSC) guidelines

These measures have since allowed EMSO, the DSC and management at the Dubai Autodrome itself to confirm that the Hankook 24H DUBAI will go ahead as planned.

Health and safety protocols, put into effect by CREVENTIC at this year’s Hankook 24H PORTIMAO and summarily developed throughout the course of 2020, will once again be governed during the Hankook 24H DUBAI weekend. Face masks will be mandatory, and while social distancing will also be moderated in the paddock, teams are permitted up to 25 personnel, including up to 15 team members, up to five drivers and five VIP guests.

That teams from 18 different countries – some as far afield as the United States of America and Japan – have continued to register their entries is another shot in the arm for the Hankook 24H DUBAI.

Almost 20 entries have already been confirmed for the GT3 category alone on 14-15-16 January, eight of which are former GT winners of the Hankook 24H DUBAI. WRT and Car Collection Motorsport, which won the event outright in 2016 and 2019 respectively – the former under the ‘Belgian Audi Club Team WRT’ banner – have each entered two Audi R8 LMS GT3 Evos, while Herberth Motorsport, the event’s 2017 winner, will enter three Porsche 911 GT3 Rs.

Newly-anointed GT3-AM Teams’ champion CP Racing will begin its title defence in Dubai with a loan Mercedes-AMG GT3 Evo, while last year’s GT3-AM class winner in Dubai, MP Motorsport, will also represent the silver arrow in the Middle East.
The UAE’s own GPX Racing, which made history this October by becoming the first team to take an official ‘Coppa Florio’ victory since 1981, will make its traditional start at its home event with a Gulf Racing-liveried Porsche 911 GT3 R.

Two models are also set to make their respective debuts at the Hankook 24H DUBAI in 2021: Team Zakspeed, a Formula alumni from 1985 to 1989, enters its first CREVENTIC-organised event with a Dodge SRT Viper GT3-R, while the United Kingdom’s Inception Racing with Optimum brings a McLaren 720S GT3 to the Middle East.

Two-time Hankook 24H DUBAI polesitter GRT Grasser Racing Team will be among the few GT front runners running a Lamborghini Huracán GT3 Evo in Dubai, though the five-strong GTX class (thus far) is an almost all-Raging Bull affair. ARC Bratislava, Gt 3 Poland, and Dubai’s own Dragon Racing, this year’s GTX class winner, all set to compete with the Huracán Super Trofeo. Leipert Motorsport, the Overall GT Teams’ champion in the 24H SERIES Continents in 2019, has also confirmed two Lamborghinis in the GTX class on its return to the series.

Almost 10 entries have already been confirmed in the 991 class. Reigning ‘Continental’ class champion DUWO Racing is sure to be among the front runners with its Porsche 911-II Cup, as is ‘European’ champion Speed Lover, which also begins its title defence in Dubai. MRS GT-Racing, a multi-time event class winner in Dubai, is also set to compete with two Porsche 911-II Cups cars in the UAE.
NKPP Racing by Bas Koeten Racing, which made history as the first ‘991’ class team to take outright victory at a 24H SERIES event earlier this year in Hockenheim, will make its return to the class in Dubai. Germany’s PROFILDOORS by Huber Racing is set to make its series debut.

Significantly, newly crowned 24H SERIES Continents Overall GT Teams’ champion Team Avia Sorg Rennsport has confirmed it will begin its title defence in Dubai with two BMW M4 GT4s, mirroring its GT4 and TC-class entrants at the event in 2020. ST Racing has entered a BMW M4 GT4 for Dubai, and will become the first Canadian team to complete a full season in the 24H SERIES in 2021.

Autorama Motorsport by Wolf-Power Racing leads a near-dozen strong TCR class across in the TCE division. The Overall TCE Teams’ champion, crowned for the second year in succession, will get its title defence under way with a three-car, Volkswagen Golf GTI TCR line-up.

Last year’s TCE division winner in Dubai, AC Motorsport, has confirmed two Audi RS3 LMS’ for the first time, one of which will don a brand new team livery. BBR, a former TCR class champion in the 24H SERIES under the MONLAU COMPETICION banner in 2017, makes its series return with a CUPRA TCR, as does Hankook 24H BARCELONA TCE winner TOPCAR Sport, and Hungary’s Zengo Motorsport.

Two CWS Engineering Ginetta G55s will be joined in the TCX class by Denmark’s Sally Racing, Belgium’s PK Carsport, and Luxembourg’s fun-M Motorsport, the latter of which secured CUP1 victory at the Hankook 24H DUBAI in 2018.

One week after the 16th annual Hankook 24H DUBAI, CREVENTIC is also set to host the non-championship Hankook 6H ABU DHABI. More than 20 teams have already signed up for the 24H SERIES’ second outing to Abu Dhabi, and CREVENTIC and management at the Yas Marina Circuit are communicating on a daily basis to make sure the event will go ahead safely. A relaxation of the mandatory quarantine period for all travellers heading into and out of Abu Dhabi is expected within the next seven weeks, though teams and track personnel may still be required to remain within a pre-determined area during their stay until a second Polymerase Chain Reaction (PCR) test has been completed successfully.

Should circumstances become too complex, the Dubai Autodrome is being considered as an alternative venue for the six-hour non-championship event.

Teams and drivers looking to register for either the Hankook 24H DUBAI on 14-15-16 January and/or the Hankook 6H ABU DHABI on 22-23 January can find further details on 24hseries.com. They can also contact CREVENTIC directly via info@creventic.com or on +31 485 471 166.