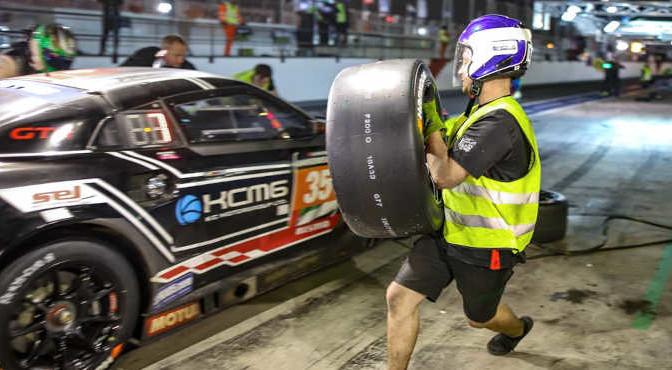 With the 2020 24H SERIES season finale at Mugello still visible in our rear view mirrors, work is already well underway for January’s Hankook 24H DUBAI with the first freight containers already loaded and many of our international competitors’ equipment already en-route to the Middle East.

CREVENTIC, the Dubai Sports Council, the Emirates Motorsport Organization, and management at the Dubai Autodrome have each confirmed that the 16th annual Hankook 24H DUBAI will take place as planned on 14-15-16 January. This has been aided in no small part by the Government of Dubai’s tireless efforts to safely re-open the Emirate to international travellers. Hotels, restaurants, shopping malls and the Dubai International Airport have now been re-opened, with digital check-in and payment, increased sanitization and mandated social distancing just some of the new health and safety protocols now being practiced across the Emirate.
Registration still possible – click here!
Provisional Entry List
With the event greenlit, CREVENTIC is also working round the clock to ensure teams enjoy the same logistical benefits, including transport and freighting, afforded to 24H SERIES competitors for more than a decade. Of the 65 registered entries thus far, 40 have already submitted their shipping forms with another 20 hoping to finalize their entries in the coming days.

In addition, more than 50 teams have already ordered their tyres for the 14-15-16 January weekend, Hankook Tires having once again confirmed its consummate support of the 24H SERIES into 2021.

In a further boost to the event, a maximum of 25 people are now permitted to attend the event on behalf of their respective team, up from the previous 15. This includes a maximum of 15 team members, up to five drivers, and up to five guests.

Entries are still being accepted for the Hankook 24H DUBAI on 14-15-16 January.

Gerrie Willems, CREVENTIC’s technical coordinator: “We’re very pleased to see that, despite a tough year in 2020, competitors and fans alike are still throwing their support behind the Hankook 24H DUBAI. The season opener has been our biggest event of the year since 2006, and though circumstances have changed since the previous edition, CREVENTIC is still working hard with our teams, the Dubai Autodrome, the Dubai Sports Council and the Emirates Motorsport Organization to ensure our first event of 2021 is a success.”
With just under two months to go before the green flag drops on 15 January, teams from more than 16 different nations have already registered.

ST Racing, the eponymous team of Canadian GT4 racer Samantha Tan, has already shipped its BMW M4 GT4 from Ontario, and is set to start its third 24H SERIES event in January following previous starts with the series at COTA in 2019 and Dubai earlier this year.

24H SERIES mainstays Herberth Motorsport, which recently secured the GT3-PR Teams’ title in the 24H SERIES Continents, had registered four entries for the Hankook 24H DUBAI, the highest number yet for the Bavarian team. This would include three Porsche 991 GT3 Rs in the top tier as well as a Porsche 911-II Cup in the 991 class.

Herberth Motorsport is also one of four previous Hankook 24H DUBAI winners to have registered an entry: WRT, which took Audi’s first overall win at the event in 2016 as Belgian Audi Club Team WRT, will bring two Audi R8 LMS GT3 Evos to the UAE in January, as will 2019 winner Car Collection Motorsport.

Haupt Racing Team, the eponymous entity of three-time winner Hubert Haupt and, effectively, an evolution of five-time Hankook 24H DUBAI winner Black Falcon, will make its official 24H SERIES debut in Dubai with two Mercedes-AMG GT3 Evos. This means every event winner since 2012 bar one will be on the Hankook 24H DUBAI grid again in 2021.
Team Zakspeed is set to make its 24H SERIES debut in the GT3 class with both an SRT Viper and a 2020-spec Mercedes-AMG Evo. Alongside its touring car, endurance racing and Formula 3 heritage, the German team was a Formula 1 regular between 1985 and 1989, and even boasted endurance racing legend – and former Hankook 24H DUBAI winner – Bernd Schneider on its F1 driver line-up in 1988 and 1989.

Former GTX class champion Leipert Motorsport makes a welcome return to the Hankook 24H DUBAI with its Lamborghini Huracán Super Trofeo as does Dutch endurance racing mainstay Cor Euser Racing, the latter of which will run a MARC II V8.

Also of note in the TCR class is Simpson Motorsport, which enters an Audi RS3 LMS for Dubai. 24H SERIES and endurance racing fans alike will no doubt be familiar with the British team’s endeavours with its Ginetta G57 prototype.

Unsurprisingly, the United Arab Emirates will be strongly represented on-track as well. GPX Racing, which secured its first outright win in the 24H SERIES at the 2020 COPPA FLORIO 12H Sicily, will makes its annual start on home turf in Dubai with its Porsche 991 GT3 R. 2020 SPX-class winner Dragon Racing meanwhile, which is also based at the Dubai Autodrome itself, could pull double duty with both a Mercedes-AMG GT4 and a Lamborghini Huracán Super Trofeo.

The Hankook 24H DUBAI will open the 2021 24H SERIES powered by Hankook season on 14-15-16 January at the Dubai Autodrome, and is set to be followed one week later by the non-championship Hankook 6H ABU DHABI at the Yas Marina Circuit in Abu Dhabi. Further information regarding both events and the 2021 calendar can be found at 24hseries.com/races.