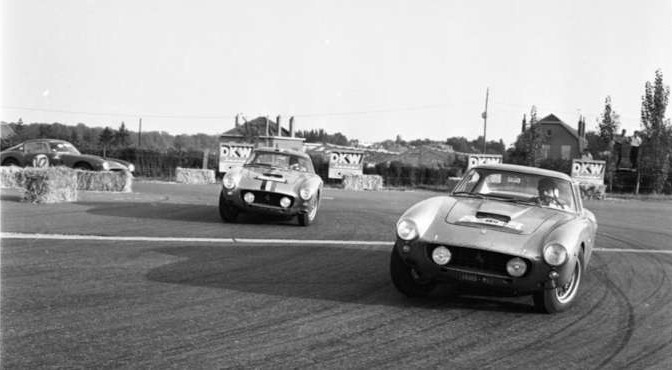 A passion based around a unique cult, the collector car, has been lived out on French roads in the context of some 29 editions! To celebrate the 30th Tour Auto Optic 2ooo, two hundred pearls from the historic car milieu will form the most beautiful necklace in the world between 19th and 24th April 2021. They will brighten up the picturesque roads of France after being on show in a new setting: the ephemeral structure of the Grand Palais as the latter is undergoing a major renovation. The route and the programme of the celebrations of this very special edition are still being fine-tuned. Rendezvous at the beginning of 2021 to find out everything – well, almost!

1961 : A CLEAN SWEEP !
The rare pearls in 2021? In 1961, the Ferrari 250 GT Berlinetta and the Jaguar MK II dominated the podium of their respective categories in the Tour de France Automobile: the 250 GT Berlinetta in GT and the MK II in tourism. Spotlight on two awesome machines in the Tour Auto Optic 2ooo which, this year, represent the theme of the event. A reminder, each edition has its own star, and for this exceptional year the Peter Auto teams will spotlight not one but two icons of the collector car scene.

The 250 GT Berlinetta was the first GT Ferrari to be equipped with disc brakes. Its shortened wheelbase added the English designation SWB to the history of the motor car for the first time. This short chassis gave the car better road-holding to make the most of the 280 bhp delivered by its 3-litre V12 engine. It was originally designed for racing and soon racked up a remarkable set of results. Besides three consecutive victories in the Tour de France Automobile (1960, 61 and 62) in 1960 the 250 GT SWB scored a great result in the 24 Hours of Le Mans filling fourth to seventh places in the overall classification. The following year Jean Guichet and Pierre Noblet drove the 250 GT SWB to a third place finish in the Sarthe. The subtle balance of the clean flowing lines of the 250 GT SWB made a major contribution to consolidating Ferrari’s place on the market of sporty grand touring cars.

JAGUAR MK II
In his book, Jaguar, berline et tradition, Bernard Viart wrote: “The 3.4-litre MK I had a short life, just over two years, but its renown would spread in a totally disproportionate manner compared to its production run and its duration.” In October 1959, the MK II was unveiled with an engine whose cubic capacity had been boosted from 3.4 to 3.8-litres in the new version. The radiator grille too was new. The windscreen, the rear window and the side windows were also much bigger than on the previous model greatly improving the visibility and giving the car a much more luminous interior. The 3.8-litre motor was not only more powerful, its smoothness and torque made the bigger engine the drivers’ favourite. In this configuration this sporty car disguised as a luxury saloon competed in rallies and races all over the world. It totally dominated its category in the Tour de France Automobile: 1960 (1st and 2nd), 1961 (quadruple), 1962 (quadruple) and 1963 (1st and 2nd). Among the winners was a figure whose name is indissociable from the Tour de France Automobile and the MK II, Bernard Consten. This remarkable individual, five-time champion including four in a Jaguar MK II, brought the event back to life in 1969 and organised it until 1980. It’s a fitting homage to a big name in the world of the motor car and rallies!