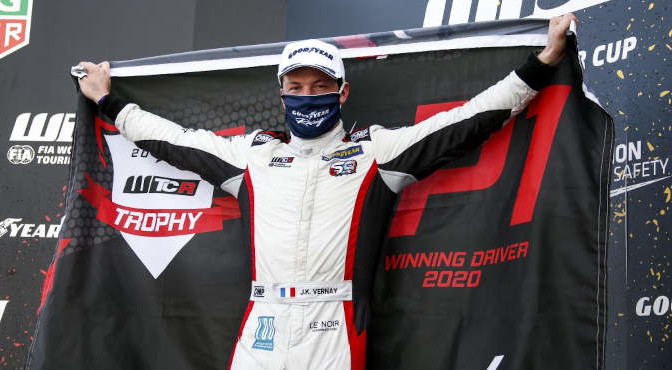 Jean-Karl Vernay is the inaugural WTCR Trophy winner following the season-deciding WTCR Race of Aragón* − 81 days after his agreement to drive for Team Mulsanne was announced.

He made sure of the title for drivers competing without car manufacturer support in the WTCR − FIA World Touring Car Cup in the second race of the MotorLand Aragón weekend, which he completed with a season-total of seven category wins and a 20-point winning margin over Gilles Magnus. Nathanaël Berthon was classified third, seven points behind Magnus, his Comtoyou team-mate. He also celebrated finishing third in the overall standings behind fellow Frenchmen Yann Ehrlacher and Yvan Muller.

Vernay’s success completes a whirlwind 81 days since his agreement with Team Mulsanne to drive an Alfa Romeo Giulietta Veloce TCR by Romeo Ferraris was announced. Following his success in Aragón, the 33-year-old was quick to praise his Italian team.

“Big thanks to my team, I think nobody would have believed what we have done this year,” said Vernay, who also took an outright win at WTCR Race of Spain earlier this month. “I’ve never been so determined and I grew up a lot. For me it was a fantastic experience to be in a little team with a lot more responsibility and I really loved it. Thanks to Romeo Ferraris, we did great and you are a very good team, be sure about that.”

Vernay’s agreement to race in WTCR with Team Mulsanne came so late that he only managed to sample his Goodyear-equipped Alfa Romeo Giulietta Veloce TCR by Romeo Ferraris on one occasion before the 2020 season got underway at Circuit Zolder in mid-September.

“I tested the car once before the championship and the car was good, so with my experience I have now, even if I’m not a touring car specialist, if I give more confidence to the team I was quite sure we would be able to do a good job. With that confidence and me doing a good job setting up the car with the guys, that was all [that was needed]. There’s a lot of great people [in the team].

“Honestly I was not thinking we were going to be able to fight for the overall podium, but we’ve been getting quicker and quicker and it’s well deserved to all these guys. Third is my best position in the championship and I’ve also learned a lot about myself and that is also important.

“People have been quite surprised with the job we have done because of our resources. But it’s been a good challenge for me and I’ve taken it very seriously, putting in so much effort. We can all be proud of what we have achieved.”

*Subject to the publication of the final results