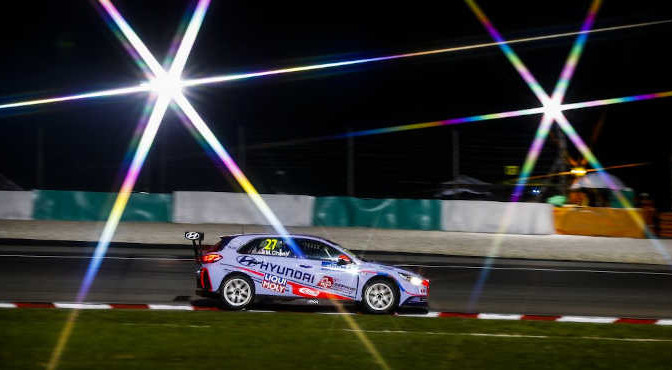 Mitchell Cheah will go from WTCR wildcard to WTCR points chaser at MotorLand Aragón this weekend following a quarantine call with a difference.

While observing the mandatory 14-day quarantine, ‘Mitch’ received a phone call that will thrust him back into the WTCR − FIA World Touring Car Cup spotlight almost a year after he impressed on his debut as a wildcard at the Sepang International Circuit.

“I was having to go through quarantine for two weeks when Hyundai Team Engstler called me and broke the news that I would be driving in the WTCR again,” the 22-year-old Kuala Lumpur resident explained. “I was so happy and so glad to get the news and I definitely have to thank the team because of the opportunities they give me, not just in TCR Germany but now in WTCR. I am happy to have this opportunity and I hope to learn as much as I can.”

Simulator sessions vital for Cheah
With no actual knowledge of MotorLand Aragón to call on, Cheah has prepared for the inaugural WTCR Race of Aragón with some simulator sessions. “I know absolutely nothing about the track, I’ve not even been to Spain before,” said Cheah, who will partner Luca Engstler this weekend. “I have been doing some simulator work just to learn the track so hopefully it will not be too much of a hassle when I get there. I will have to be very focused because the schedule is very tight over two days and it’s going to be tough.”

Returning to WTCR an “honour” for Malaysia’s finest
Cheah was three times in the top 20 at WTCR Race of Malaysia last December with P16 in Race 2 out of a field of 30 cars the pick of the bunch. He can’t wait to race again in the series. “For me to be able to drive against these guys is a real honour and a pleasure to be a part of WTCR. These guys are really world-class drivers and they deserve to be where they are now. I hope that one day I will be able to reach their level or maybe better in the future.”

Cheah wants a WTCR future
“My plan for sure is to reach the top level in touring car racing, which is WTCR,” said Cheah, who will be one of four WTCR Rookie Driver contenders at WTCR Race of Aragón. “I’ll be going to a track where everybody raced two weeks ago but hopefully I can finish in the points or be in the middle of the fight in all the races. The then I think I would be happy.”