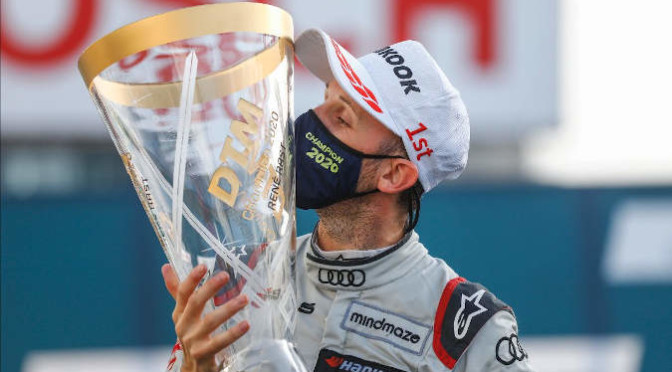 The third title, the 24th race win and therefore the most successful Audi works driver in DTM history: René Rast has pulled it off! In the final race of the DTM season at Hockenheim, the German Audi driver scored a commanding victory and is the new and the old DTM champion. With his third title in only his fourth DTM season, Rast draws level with Klaus Ludwig in the all-time list of DTM champions. Only Bernd Schneider has more titles, five of them. His main rival Nico Müller (SUI, Audi), who still had title hopes after his victory on Saturday, had to make do with second place in the race and, with 330 points, was just beaten by Rast (353) in the final drivers’ standings. Rast’s teammate Jamie Green (GBR) showed another strong performance at Hockenheim on Sunday and rounded out the podium in third place. Next up were the other Audi works drivers Mike Rockenfeller (GER), Robin Frijns (NED), who ended up third in the drivers’ standings with 279 points, as well as Loïc Duval (FRA). Thus, all the six Audi works drivers locked out the first six places. Classified seventh, South African Jonathan Aberdein was the best-placed BMW driver like already on Saturday. Audi had already won the constructors’ title early, just like the Audi Sport Team Abt Sportsline had already secured the 2020 DTM teams’ title.

In the final qualifying session of the season, René Rast posted the fastest time like on six previous occasions this season already. The 34-year-old German’s qualifying record is impressive: seven pole positions, three second and five third places on the grid. From this season’s 18 qualifying sessions, Rast was among the fastest three 15 times and therefore was able to add 32 additional points to his championship tally just by his qualifying results alone. Nico Müller scored 23 points in this discipline, Robin Frijns 29.

For Rast, the start of the race wasn’t perfect: initially, he had to let Mike Rockenfeller, who had a rocket start from second on the grid, pull away. Jamie Green, third on the grid, didn’t have the best of getaways either and had to surrender a place to Nico Müller. On lap three already, Rast then made his way past Rockenfeller thanks to additional power from push-to-pass and took the lead until coming in for his mandatory pit stop. Müller also managed to overtake Rockenfeller and was now in the hunter’s role, but was unable to overtake Rast at the track.

In the pits, however, he succeeded: like on Saturday, Müller’s Abt crew attempted an undercut to beat Rast with already warm tyres once the latter had also made his stop. The plan worked out: Rast, who made his pit stop three laps later, rejoined the race behind Müller. It took Rast five laps to close the gap to Müller again and eventually overtake him on lap 24. After that, Müller was no longer able to follow Rast as the latter drove a commanding victory home. Behind Rast and Müller, a thrilling battle for third place unfolded, in which Green first overtook Frijns and then also Rockenfeller.

As a result, a DTM season that was extraordinary in many ways has come to an end. As a result of the Covid-19 pandemic, the season had to be condensed: all 18 races were held within only 99 days on nine race weekends, a very demanding programme, and a huge workload for drivers and teams. In 2021, powerful GT3 sports cars will be racing in the DTM. The season opener of the schedule with nine race weekends has been planned at the end of May.
“It has been a good season for the DTM. In spite of the pandemic, we have had nine successful events without a single case of Covid-19 infection. We have really missed the fans and all their emotions at the race racks, but nevertheless, we have staged good sport for them. I was impressed by the hard, but fair battle for the title. At the end of the season, René Rast has turned the tables in his favour. Nico Müller was at a similarly high level, both have shown an impressive performance. This fascinating racing is the DNA of the DTM and will remain the core of our platform in the future as well.”
Gerhard Berger, chairman, ITR e.V.
» Quotes – race 2, Hockenheim
“When somebody would have predicted this five or six weeks ago, I would have said that he doesn’t have a clue about motorsport. The race was very emotional. My car was just flying, it was incredibly good and fast. I was driving all on my own for a large part, it was difficult to stay focused. There were so many things going through my mind and I was hearing new noises over and over again. I was praying that the car would last. I am so grateful to my guys, my team. It is great what they have achieved. They have loved my car, it was sacred to them, even to the extent that I wasn’t allowed to touch it sometimes. My future team in Formula E, Audi Sport Team Abt Sportline, has given me a hard fight with its drivers Nico Müller and Robin Frijns throughout the season. It was my 24th win, and that in only four years. Now, I am the most successful Audi driver in terms of race wins in the DTM history of the brand. That means a lot to me, and so does the third title.”
René Rast, Audi, winner driver´s title
“To be honest, we came to Hockenheim to fight until the final flag. But René Rast simply didn’t make any mistake in the last six races, he made it really difficult for us. Apart from Zolder, we were always competitive. Nevertheless, we are very proud of our two drivers. The early win of the teams’ title also shows how strong Nico Müller and Robin Frijns were. Congratulations to René Rast and Team Rosberg.”
Thomas Biermaier, Audi Sport Team Abt Sportsline, winner team´s title
“To be honest, personally, I am happy with the 202 season, after things were going so badly for me in 2019. I have scored a second-place finish and claimed the first pole position for BMW after a long time. I am the eldest BMW driver and I have shown that I can still keep up with the young guys pretty well. The DTM with these Class 1 touring cars was simply great and it is sad that these cars will now be pushed into the museum. But when a door is closing, a new one is opening all the time as well. Anyway, it was a great time.”
Timo Glock, best-placed BMW driver
» Results – race 2, Hockenheim
01. René Rast (GER), Audi RS 5 DTM, 37 laps in 57m 49.271s
02. Nico Müller (SUI), Audi RS 5 DTM, + 10.199s
03. Jamie Green (GBR), Audi RS 5 DTM, + 13.409s
04. Mike Rockenfeller (GER), Audi RS 5 DTM, + 16.648s
05. Robin Frijns (NED), Audi RS 5 DTM, + 17.887s
06. Loïc Duval (FRA), Audi RS 5 DTM, + 26.068s
07. Jonathan Aberdein (RSA), BMW M4 DTM, + 32.673s
08. Timo Glock (GER), BMW M4 DTM, + 40.451s
09. Sheldon van der Linde (RSA), BMW M4 DTM, + 40.974s
10. Philipp Eng (AUT), BMW M4 DTM, + 43.244s