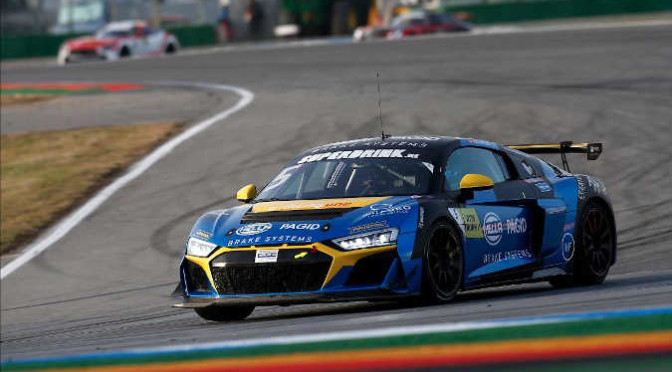 Lucas Mauron continues where he had finished off in Belgium: with his next win in the DTM Trophy. The Swiss driver of the Hella pagid – racing one team, the winner of both races at Zolder, was also unbeatable in the first race of the season finale at Hockenheim. With the Audi R8 LMS, he scored a dominant win from Tim Heinemann (GER). The Mercedes driver from the HP Racig International team, who had already wrapped up the drivers’ title in the new race series for production-based GT sports cars at Zolder, charged his way from 13th on the grid to finish second. Third place went to Austrian Nicolas Schöll (Porsche, Allied Racing). Jan Kisiel (POL, Mercedes-AMG, Leipert Motorsport), meanwhile, had bad luck: he was second across the finish line, but was relegated to fourth with a time penalty. Nevertheless, the Pole has now secured runner-up spot in the drivers’ standings.

The race was turbulent from the beginning: a few seconds after the start that saw Mauron take the lead from pole position, there was a huge crash in the midfield. Involved were the two Porsche drivers Peter Terting (GER, PROsport Racing) and Rudolf Rhyn (SUI, Phoenix Racing) as well as Marc de Fulgencio (ESP, Mercedes-AMG, Leipert Motorsport), the race was over for all of them. The Toyota of José María López (ARG, Ring Racing), that had also been involved in the accident, retired a little bit later.

After a safety car intervention of several laps, Mauron remained in control at the front of the field while an exciting three-way fight developed behind him with Kisiel, British driver Ben Green (BMW, FK Performance Motorsport) and Schöll. Tim Heinemann, who had been dropped ten places on the grid following a decision by the race officials from the race held at Zolder in mid-October, started a great comeback and made up one position after another. Green, meanwhile, did everything in his power to get past Kisiel, who aptly defended. And it didn’t end there for Green: after multiple contacts, he had to park his BMW M4 with broken left front wheel suspension along the track. That saw the Brit’s chances of securing second place in the drivers’ standings blown. The race ended behind the safety car.

In the drivers’ standings, Heinemann has already secured the title. The champion extended his tally to 250 points. Kisiel is also beyond reach in runner-up spot with 153 points. Green (120 points), Ben Tuck (GBR, Walkenhorst Motorsport, 115) and Mauron, who has considerably made up with his three wins and is fifth in the standings with 97 points, are all still in contention for third place. This battle will be decided in the final race of the DTM Trophy season on Sunday (start at 15.15, live on the streaming platform grid.dtm.com).

» Quotes – race 1, Hockenheim
“Of course, I am really happy with my third win in a row. Fastest in pratice, pole position and now a lights-to-flag win: it couldn’t have been any better for us. My team has done a fantastic job. It was an interesting race, even though I was out there on my own for most of the time. But I still learned a lot and now, I am looking forward to the final race of the season.”
Lucas Mauron, Audi, winner
“That was some hard work! My grid position was anything but ideal and quite unusual, too. At the start, I was a bit lucky because of the crash that happened in front of me. That enabled me to move up to seventh. After the safety car, I was able to make further progress. Of course, I knew that Jan Kisiel was still in contention for runner-up spot in the championship. There was no real opportunity to overtake, so I rather backed off and brought my result home. From 13th on the grid to second at the finish. Today, I definitely can’t complain!”
Tim Heinemann, Mercedes-AMG, 2nd place
“I had a good start and even was second for a brief while, but then I was caught up at the hairpin and lost the position again. After the safety car, it didn’t go too well initially, but after a few laps, the pace was good again so that I was able to attack once more. It was my first participation in the DTM Trophy and I really like it. The races are exciting and competition is tough, just the way it should be. All in all, a very positive experience.”
Nicolas Schöll, Porsche, 3rd place