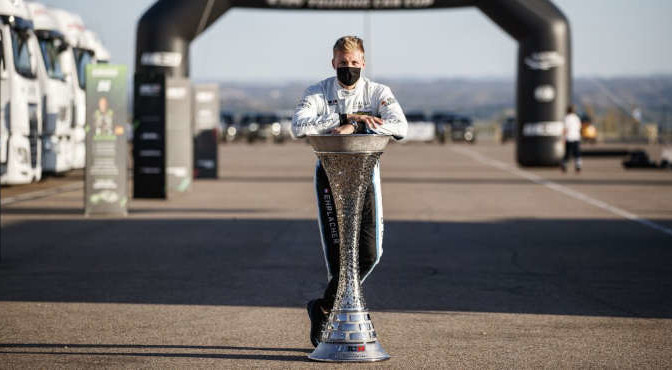 An incredible 11 drivers start WTCR Race of Aragón with a chance of winning the coveted 2020 WTCR − FIA World Touring Car Cup title. Here’s what the top three contenders have had to say ahead of the season decider from November 13-15.

A 26-point lead going into the deciding weekend of the season, is that enough?
“It’s better than a 26-point deficit for sure but it’s still not enough because there are still 85 points to get. Of course, I would have liked a few more points in the second to last round but with the engine change and the turbo issue we got it was a bit difficult. But we still got some points although it will not be easy next week. It’s a margin, it’s a one-race margin let’s say, but we will have a tough weekend to keep that.”

What or who do you fear most heading into the season finale?
“Vernay and Guerrieri are the main rivals for me at this moment but the main focus will be to be in the top 10 in qualifying, that’s the target. If we reach that then it’s already a good step towards the title because we will be there to manage and we will be there to score good points. We showed good pace in the races last weekend. The most dangerous part will be the qualifying.”

How confident are you that you will have the car to beat at WTCR Race of Aragón?
“We showed the car was quick in Aragón but we just obviously didn’t get everything together. The next time the Honda will be much stronger because they will be 30 kilos less but we should be competitive against them and being able to fight. I am quite confident we can reach Q2 and the top 10 so we will see.”

Can you believe what you have been able to achieve so far this year?
“Whatever will be the result at the end I will be happy about my season. We’ve won three races and shown a strong pace all season. But when you get something, you want more. When you get the lead from the first qualifying until now you definitely want it. I’m happy to be leading but with all this work we’ve done I want the big title. There is a bit of pressure but I try to ignore that.”

How much of a role will your team-mates play during the season finale?
“They will help me like they do from the middle of the season when they start to work for me and the Cyan team let’s say. They are important and I’m really thankful to these three guys, they are top-rated guys and they help me a lot. Of course, they are definitely part of the fact I am leading the standings and I’m really happy to have them and much more confident when I go to the weekend because whatever position I am in I know they are there to take away points from the others and help me to get to the top of the field.”

When you look at the table, a 26-point gap, what are your chances of winning the title?
“I think they are quite open to be honest. Even though I am a little bit further back than what I was last year from Norbi [Michelisz], I think we are going to be much more competitive this weekend compared to what we were the last time because of the difference in the compensation weight. Everything is still wide open, still to play for. Also, the weather will be interesting to see how it’s going to be. And I can count on very good team-mates and a team behind me and I trust we are going to do a very good job without a doubt.”

Does the fact you have experience of being in a title fight help you?
“I’m not sure if it will make a difference or not. I just approach it the way I think is the best for me and I am obviously very happy again to be in a championship fight. I don’t know how the others approach it but the way I do it is the best way possible it can be done, have a go and be ready for the battle.”

After Zolder did you think you would go into the final weekend in a position to win the title?
“While I was at the second chicane at Zolder sitting in the chair with the broken engine because of the radiator that was leaking, I really thought the quest was going to be really uphill. I really knew at this moment the mountain was going to be really hard to climb if I wanted again to fight for the championship in the last race. But that moment I thought about it and I asked myself how hard it would be, but I just answered it and said, ‘let’s just go and try and see what we can do’. But I really thought at Zolder it was a very hard moment to reverse the situation I was at, but still I never gave up, never threw the towel mentally. I knew there was a chance, obviously a much, much steeper climb to go for but it’s part of the game sometimes.”

Will the addition of the chicane on the back straight benefit the Hondas?
“I think yeah, the shorter back straight is probably a positive for us. I cannot say 100 per cent but I think it will be something that could help us a little bit. Maybe it also helps the other drivers, I don’t know, but for our car it will be better because we were lacking a bit the top speed.”

What result would be acceptable to you if the title wasn’t possible?
“Acceptable is a word that should be used in every situation, accepting whatever comes. If it comes the championship of course I will accept it like the best way possible. If it doesn’t come I will accept it the same way. Because it will be what it has to be, there is no other way things can happen than the way they happen. It sounds a little bit philosophical but in the end it’s like this. I am not thinking to accept one thing and not the other one. Whatever comes I will embrace it and try to learn from that. I am not worried about this outcome, whatever it is. I am just focused on enjoying and trying to give it all again. I am really happy to be in this position. It’s all good.”

When you take a look at the standings, do you think you can still win the title?
“It’s not like we don’t have any chance to win but I don’t have any expectation to win. We could have a better chance without the penalties we took. People are quite surprised with the job we have done because of our resources and for sure I will do my best and show 100 per cent of our potential. It’s been a good challenge for me and I’ve taken it very seriously, putting in so much effort and we can be proud of what we have achieved.”

Out of the top three title contenders you were the most competitive at WTCR Race of Spain. That must give you a lot of belief for the season decider?
“The new track layout will change a bit what happens because it will be better for everyone and the Honda will be much quicker, also with the drop of 30 kilos. The Hyundai will again be competitive so it will be much more tight. Yann was quite unlucky but otherwise he could have been champion already when you look at the pace of Santiago [Urrutia], which was quite amazing. It’s going to be super-tight and we will have to be very smart and very intelligent during the races. A lot of things are going to happen with a lot of up and down.”

You’ve referenced the points lost through penalties and how they’ve affected your title chances but how good will the final race weekend of the season be?
“The fight for the podium will be amazing and I’m more focused on that than the title to be honest because the others are too much in front so it’s not going to be possible. Yann did a really good job, leading the championship from the beginning. It will just be amazing if we can finish on the podium with such a small team, that will already be a good story and really that’s the target. Everyone is going to be much more tight and everybody will have less weight and I’m quite excited for the fight. Hopefully the best driver will win the title, it’s a fair fight and we put on a good show for the TV.”

HOW THEY SCORE IN WTCR?

The top 15 classified finishers score points in all three races as follows: