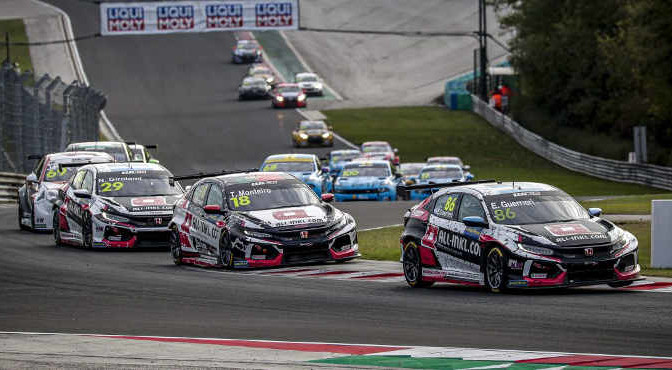 Esteban Guerrieri shot back into contention for the WTCR − FIA World Touring Car Cup with a brilliant victory double at WTCR Race of Hungary today.

After winning Race 1 from the DHL Pole Position, the ace Argentine was at it again in Race 3, steering his battle-scared ALL-INKL.COM Münnich Motorsport Honda Civic Type R TCR to win number two of an action-packed weekend having also started at the front.

Last year’s title runner-up leaves Hungary second in the standings and 22 points behind Goodyear #FollowTheLeader Yann Ehrlachner, who took his third victory of the season in Race 2 ahead of uncle and Cyan Racing Lynk & Co team-mate Yvan Muller.

Ehrlacher was also on the podium in Race 1, finishing second behind Guerrieri and ahead of Néstor Girolami in the second ALL-INKL.COM Münnich Motorsport Honda. Jean-Karl Vernay topped the WTCR Trophy classification in all three races in his Team Mulsanne-entered Alfa Romeo Giulietta Veloce TCR by Romeo Ferraris, the Frenchman also scoring an overall podium in Race 2.

Tiago Monteiro was back on the podium in Race 3 for ALL-INKL.DE Münnich Motorsport, as Girolami underlined his return to form following his huge crash at WTCR Race of Slovakia last weekend with third place. Zengő Motorsport’s Mikel Azcona underlined the potential of CUPRA’s all-new Leon Competición with fourth in Race 3.

Monteiro and Gilles Magnus, who both started at the back due to engine-change and ride-height-infringement penalties completed were P14 and P15 in Race 1 respectively with Bence Boldizs taking the final point due to Filippi not being eligible for points as a result of his wildcard status.

Urrutia was on form again in Race 2 with fourth place behind Vernay, but fifth for Michelisz was as good as it would get for the Hyundai-powered Hungarian, although he did win the TAG Heuer Best Lap Trophy for a 1m53.620s effort in Race 1, a new WTCR lap record around his home track.

Coronel collided with Tarquini earlier in Race 2 and was also involved in a collision with Engstler, which led to the German crashing heavily in his family-run Liqui Moly-backed Hyundai. Azcona and Girolami retired with damage sustained when they collided at Turn 2 on the opening lap.

The fact Engstler managed to start Race 3 was testament to the rapid and extensive repair his team completed following his Race 2 crash. Scoring the final point of the weekend was fitting reward.