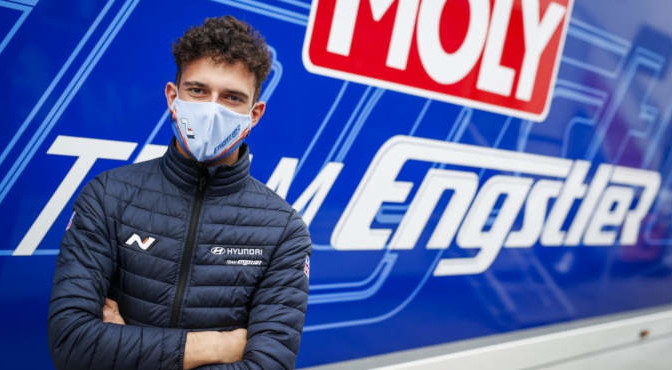 The 19-year-old Austrian will take over the Goodyear-equipped Hyundai i30 N TCR Nicky Catsburg drove to victory in Race 3 at WTCR Race of Slovakia on Sunday. Catsburg is not available to compete at the Hungaroring due to a previous commitment, leading to Gruber getting the call to step up to the WTCR − FIA World Touring Car Cup for the first time.

He will join forces with 20-year-old Luca Engstler in the team owned by Engstler’s racing father Franz with both young talents eligible for the WTCR Rookie Driver award.

“It’s hard to say why I have this opportunity after just four weekends in ADAC TCR Germany,” said Gruber. “But my team has really supported me and Hyundai said ‘yes, let’s give it a shot’. Maybe it’s because I could win my very first race in TCR Germany. We’ve had some hard times after this but we’ve showed some good speed and I will try to keep this momentum going to the Hungaroring where I will try to support the team as much as possible and try to get the best result for them.”

Sneak preview of the challenge ahead
Gruber prepared for his WTCR debut with a visit to WTCR Race of Slovakia last weekend. There he was able to watch the Engstler Hyundai N Liqui Moly Racing Team in action, but also observe the level of competition he will face.

“For sure it will be hard at the Hungaroring,” said Gruber, who took part in the various Engstler Hyundai N Liqui Moly Racing Team briefings at the Slovakia Ring as part of his acclimatisation process. “I was watching all the WTCR drivers and it’s completely different to TCR Germany. Everything is bang on from the start of FP1 and I’m still learning how to race a touring car. That’s why I am here, to learn and do my best.”

Hungaroring help at hand
While the WTCR is all-new to Gruber, he does have growing knowledge of the Hyundai i30 N TCR, plus the 4.381-kilometre Hungaroring, venue for this weekend’s action. “I was driving in Formula Renault at the Hungaroring last year and I really love this track,” said Gruber. “It has a good design and it will be hard for sure. They are tough guys, all fast but with the team we can do a good job and land a good result.”

Third-generation racer, who competed in Formula 4, on his happy family
Following a successful stint in karting, Gruber switched to Formula 4 in 2018 then raced in Formula Renault in 2019 prior to his move to ADAC TCR Germany for 2020. “I can’t wait for this weekend but I want to say a big thank you to Hyundai and all the support from Liqui Moly Team Engstler that they give me this chance,” said Gruber, whose father and grandfather both raced. “For me being with the Engstler team feels like home, I get on with everybody in the team and we are having fun. When it’s getting serious we are serious and everyone tries their best to try to get faster and faster.”