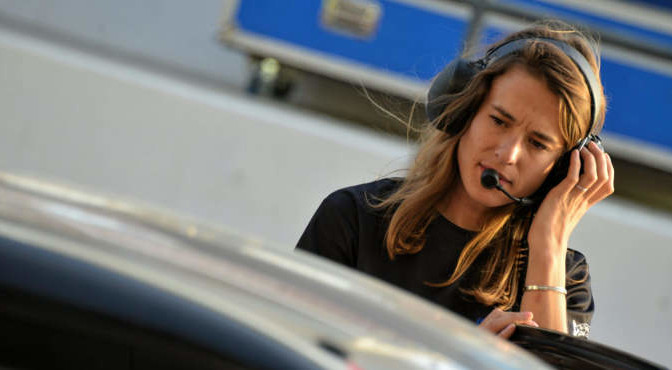 The race engineer is among the most important individuals on a GT3 team. From setup to strategy, their decisions play a major role in the car’s finishing position. You can have the best drivers in the business, but without the right engineer to guide them results will be difficult to come by.

Indeed, helping drivers to better understand what they need from their machinery is a crucial task. In GT3 racing this can mean working with an experienced pro, a young racer learning their craft, or an amateur competitor – three very different challenges. It is a job that requires an open-minded approach, a fierce competitive spirit and, of course, the professional skills of an engineer.

To learn more about the role we spoke with Marie-Alice Lahaye, who works as a race engineer at French squad CMR. After starting out in single-seaters she moved to endurance competition with leading outfits such as Sebastian Loeb Racing and Belgian Audi Club Team WRT. This year she has joined CMR for the French outfit’s return to the GT3 ranks with Bentley.

It has already been an eventful ride, with high points including a Sprint Cup podium in the opening race at Misano and a superb overall runner-up finish for the squad’s Silver Cup crew at Zandvoort. There have been challenging moments, too, but on balance 2020 has been a successful return for the squad. So, just how did Marie-Alice come to this role?

“I was interested in motorsport before – I would watch Formula 1 and do some karting – but it was not my number one passion,” she explains. “I never thought that this is what I would do with my life!

“I needed to decide what kind of engineering I wanted to do and I found a school where you learned about vehicles,” she continues. “To be honest, when I started I was thinking that I would go towards aviation, but I found automotive much more interesting, so I stayed in this area.

“When I had my degree in technical engineering I could choose to work for a ‘normal’ brand or go to motorsport. It seemed more exciting, so I chose this way. I did my internship with ART Grand Prix and then stayed with them afterwards.”

ART was a powerhouse of junior single-seater racing when Marie-Alice joined, just as it is more than 10 years later. It was therefore an ideal place to learn the sport and, as is common, she began working as a data engineer.

“In this role you collect all the data, you’re in charge of the sensors, the dyno machine for the dampers, you manage some stocks. It’s mainly electronics, but you are sitting with all the other engineers and you learn a lot. That was a very nice year. Our drivers were Nico Hulkenberg and Jules Bianchi, so I was very lucky.”

After several seasons in single-seaters – particularly World Series by Renault and its premier Formula Renault 3.5 category – Marie-Alice made the move to endurance competition. She has since worked on programmes in GTE, LMP and GT3 racing, discovering a greater personal challenge in this area of the sport.

“I think that endurance racing is growing a lot and it’s also much more interesting for me. When you do single-seaters, your job is more or less finished on Saturday. When the race starts you just speak a bit on the radio, try to help manage traffic or tyre degradation, but you are not an actor. In endurance racing you manage the car, your drivers, the strategy. You have all the cards to play so it’s more exciting.”

Having worked on Audi machinery for a number of years, 2020 represents a new challenge for Marie-Alice. Swapping the R8 LMS for Bentley’s Continental GT3 has not been a simple transition, but that is clearly part of the motivation.

“Going to a new car is difficult,” she confirms. “We are using the same Pirelli tyres, but everything is different. You need to test a lot, but that’s an exciting part of the job. If you stay on the same car for 10 years it gets boring. It’s always nice to start a new project.”

As Marie-Alice has alluded to, the race engineer plays a particularly active role throughout the weekend. So, what are her key areas of focus once the car has been unloaded from the truck?

“The first thing is to improve; the objective is to become quicker and quicker. The car has already been developed by very good people, so you try to make it more efficient.

“I want to start with the best setup, based on the experience from testing and previous meetings. During free practice we try to be as quick as possible and also work on race pace, trying to be consistent with older tyres. I manage the drivers, going through videos and data to understand what’s going on with the car. We also manage the tyres – when they are going in the oven, all that stuff – and we prepare for quali.

“At CMR we have two race engineers and two data engineers. The data engineer helps with all the electronic jobs; to be honest I can’t really do this anymore, because I’ve forgotten how it works! They bring me all the information I need to do my job in the best possible way. In some teams you have a strategy engineer, and it’s good to have someone dedicated to this.

“Normally there will be other engineers working with you, so you can discuss what you’re doing and exchange information. It’s very important to learn and have new ideas. At WRT, for example, we had five cars and it was quite nice because with five engineers there were a lot of ideas.

“At CMR I’m working with [team boss] Charly Bourachot and we are sharing all the information and trying to work together to come up with different ideas. It’s very important not to work alone, to see what’s going on around you and test new stuff. Even if you don’t think it will work, it’s worth trying.”

During the race, too, Marie-Alice and her colleagues remain at the heart of the action.

“As an engineer you decide when to box, if you do a long stop or a short one, if you double stint the driver or the tyres. With strategy you can really make the difference in a long race. In the Sprint Cup that’s not so much the case, but in a six-hour or a 24-hour race you’re a key point. It’s as important as the base of the car.”

One of the main tasks a race engineer undertakes is honing the setup of the car alongside the driver. Marie-Alice has worked with plenty during her career, so what qualities can they bring to help her extract the most from the machinery?

“The most important thing is their feel for the car,” she says. “It’s much easier to work with a driver who understands exactly what they need to be quicker and how the car can be better for them. If a driver can do that you win a lot of time, because just by talking on the radio I understand what they need and we can try something different.

“If a driver doesn’t have this capacity it’s a bit more complicated, because you need to watch videos and check the data. This all takes time, so the capacity to feel the car and understand it is very important.”

An engineer’s work is clear for all to see during the race. But when asked which aspect of the weekend she enjoys most, Marie-Alice picks qualifying, particularly the Endurance Cup’s three-session format in which a clean lap makes all the difference.

“Quali is the most exciting time for me,” she says. “It’s quite short and there’s a lot of adrenaline. You give your all to have the best setup over two laps and try to manage the traffic. It’s very, very exciting.”

The Sprint Cup concludes this weekend with a trio of races at Circuit de Barcelona-Catalunya. For CMR, it offers an opportunity to end the short-format championship on a high before switching its attention to the blue riband Total 24 Hours of Spa (22-25 October) and the Endurance finale at Circuit Paul Ricard (14-15 November). Under the guidance of Marie-Alice and her colleagues, the team has made major strides this season. A headline result to end 2020 would be the perfect reward for their efforts.