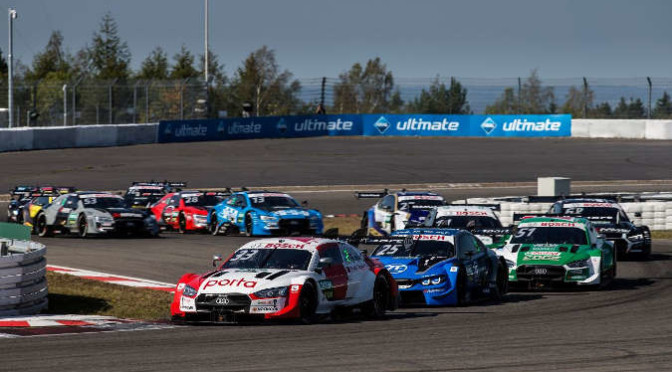 A hot October in the DTM: with the third double-header and the three-way battle for the title between Nico Müller, Robin Frijns and René Rast that is heating up, the popular race series is starting its final spurt that is full of excitement and also encompasses the return to Zolder, the DTM’s birthplace back in 1984. It is the antepenultimate competition with the fascinating 640 hp strong touring cars to Class 1 regulations from Audi and BMW before a new era is starting in the DTM with spectacular GT sports cars being introduced for 2021.

The decision in the battle for the coveted DTM title is turning into a three-way fight, featuring Nico Müller from Switzerland, Robin Frijns from The Netherlands and René Rast from Germany. All three are racing an Audi RS 5 DTM to secure the decisive points and seem to be deciding the battle for the champion’s trophy between them. The three drivers have been dominating the 2020 season: the Audi trio has won ten from the twelve races held thus far while BMW came out on top twice. Five-time season winner Müller is leading the drivers’ standings at 242 points, but his margin from Frijns (224) has decreased to 18 points. Defending champion Rast, meanwhile, is still within striking distance at 195 points. The following four drivers also still have title chances, at least theoretical ones: Sheldon van der Linde (RSA/BMW/88), Loïc Duval (FRA/Audi/87), Mike Rockenfeller (DEU/Audi/87) and Marco Wittmann (DEU/BMW/86).

Zolder sparks mixed emotions among the drivers. Some love this traditional circuit opened in 1963 and considered as an ‘old school’ track. A few even refer to the four-kilometer long circuit as a ‘miniature Nordschleife’, but others fear the comparatively small run-off areas and the barriers that are close to the track. Whatever their feeling, they all have respect, especially the Zolder newcomers, including Lausitzring race winner Lucas Auer (AUT/BMW). Moreover, Zolder is presenting itself with a ‘facelift’: a new layer of asphalt and partly new kerbstones pose an additional challenge to engineers and drivers.

Last year, the DTM made its comeback at Zolder, 70 kilometres to the west of Aachen, Germany, after an absence of 19 years. BMW and Audi shared the victories. Philipp Eng (AUT) won the race on Saturday for the brand from Munich while René Rast came out on top on Sunday, winning for Ingolstadt. At 1m 23.600s, Eng holds the official race lap record at the 4.011 kilometers long track. Robin Frijns, meanwhile, has a special relationship with Zolder. Living in Lanaken (BEL), half an hour up the road, the 29-year-old is considering Zolder as his home track. Frijns is keen to use this advantage to put Müller under decisive pressure in the internal duel within the Audi Sport Team Abt Sportsline. With five pole positions, that enabled him to rack up 26 additional championship points, and three race wins, Frijns has been particularly strong this season.

DTM history: Danish driver Kurt Thiim with the most wins at Zolder

Zolder is the circuit where it all started. On 11 March 1984, unusually early in the year, the inaugural race of the DTM still called Deutsche Produktionswagen-Meisterschaft (German production car championship) at the time, took place at the former Grand Prix track. Harald Grohs, who raced a BMW 635 CSi, became the first-ever DTM race winner. The driver from Essen, Germany, who, aged 76, is still racing a BMW M3 in the Tourenwagen-Classics series, also won the penultimate round of the 1984 season as well as the 1985 season opener at Zolder. Kurt Thiim, however, is the most successful DTM driver at Zolder, where the Dane scored a total of five race wins. With ten victories, BMW is the most successful manufacturer at this track.

Most of the 16 DTM drivers from eight countries only had two weekends off to recharge their batteries for the final third of the season. Those who participated in the 24-hour race at the Nürburgring even had just one weekend to prepare. With the third double-header after Lausitzring and Nürburgring, Zolder, from 9-11 October and from 16-18 October, is yet another strenuous effort for the drivers prior to the big showdown from 6-8 November at Hockenheim. And the DTM only got its season underway on the first weekend of August at Spa-Francorchamps, also in Belgium – a rather compact season as a result of the Covid-19 pandemic.

Due to the increasing number of Covid-19 cases: ticket sales stopped, no on-site spectators

The Covid-19 pandemic is also turning the Zolder round into an extraordinary DTM event. Due to the increasing number of infections, Germany’s Ministry of Foreign Affairs recently issued a travel warning for Belgium. The DTM organisation ITR reacted immediately to this development and, in close coordination with the local organisers, stopped the ticket sales. The races will be held without spectators being present on-site. Tickets that had already been sold will be fully reimbursed.

Reduced presence of teams and organisation – SAT.1 will be broadcasting from the studio

The DTM’s comprehensive infection protection concept that made it possible to get the season underway in the first place, has been made considerably more stringent for Zolder due to the current situation. Teams and organisation, media and TV: in all areas, the on-site staff has been reduced to a minimum and potential contact has been limited further. The implementation of ‘business essential’ is the responsibility of the various organisations involved in the DTM. Of course, the DTM experience remains unaffected because racing at the demanding Zolder circuit is always spectacular. SAT.1 is broadcasting the races live on Saturday and Sunday from 13.00 hrs onwards, as usual, with Matthias Killing as an on-site reporter and Andrea Kaiser from the studio in Unterföhring near Munich. SAT.1 lead commentator Edgar Mielke and expert Martin Tomczyk will be commentating the races in their usual competent, entertaining and lively manner. Moreover, the free practice sessions on Friday and the two qualifying sessions can be watched in full and from anywhere in the world on the streaming portal DTM Grid (grid.dtm.com).

» Quotes – preview, Zolder 1
“As much as we are looking forward to a thrilling final spurt in the 2020 DTM, one thing is clear: Zolder will not be a usual DTM event. As a result of the latest development in the number of infections, we have decided in close co-ordination with the local organisers, and different from what had been planned, to hold the races without spectators being present on-site. For us, this decision was anything but easy. After all, the fans and their emotions is elementary to sport and the DTM. However, safety of everyone involved comes first. Therefore, we have adapted our proven infection protection concept to the current situation. There will be considerably less people on-site than what is usual otherwise.”
Marcel Mohaupt, managing director, ITR GmbH
“The little break was good, but it was unusual, too, because we had been in action all the time since the end of July. It was very nice to have some time for the family, for my partner and for our new-born, of course. As a result, I am extra motivated for the final spurt of the season to achieve our gals. Zolder is a cool track. From the new asphalt, I am expecting more grip, that is always good. The lay-out doesn’t leave room for any mistakes, but driving at the limit there is fun. I am looking forward to that.”
Nico Müller, Audi Sport Team Abt Sportsline
“The season is passing by so unbelievably quickly. It seems to me as if the first race at Spa-Francorchamps was only yesterday. The calendar is massively compact. That is demanding for all the drivers, but even more so for the teams, the mechanics. We have used the little break from the racing particularly for analysis and improvement of our car. Zolder has always been a good venue for BMW and so it was last year. We have nothing to lose, we will do our utmost to achieve the best possible result. Zolder is very special, but I am confident, especially as I have adapted considerably better to the BMW M4 since the Nürburgring races.”
Jonathan Aberdein, BMW Team RMR
“My WRT Team Audi Sport is from Belgium, so Zolder has a special significance for WRT. I have spent the days prior to the race with the team to prepare in the best possible way for the two race weekend’s at WRT’s home track. From my point of view, a double-header is an advantage as I can implement the experience straight away. Because of the new asphalt and the partly new kerbstones, Zolder will certainly be different. Quickly adapting the car to the new conditions is a challenge. I have to get used to the chicanes, I like the high-speed sections better. And then the weather can be playing a role, too.”
Ferdinand Habsburg, WRT Team Audi Sport