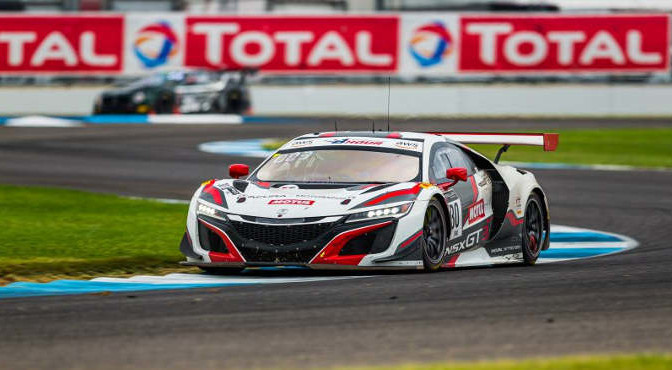 Drivers Dane Cameron, Mario Farnbacher and Renger van der Zande drove magnificently to finish third at the legendary US venue, proving the NSX GT3 Evo to be fast and consistent in both the wet conditions at the start, and on the dry track surface later on.

A podium had looked unlikely at the quarter-distance mark. With the circuit drying after heavy early showers, Mario was given slick tyres as he replaced Dane behind the wheel.

But with unexpected rain returning just moments later, a further stop was required to change back to wets, meaning the German was two laps behind the leader in eighth place when he resumed.

A combination of some ultra-fast driving from both himself and Renger as well as some inspired strategy calls brought the car back onto the lead lap by the five-hour mark.

The race boiled down to a three-way fight for victory when the pack was released by the safety car with Dane back behind the wheel and in third place shortly afterwards.

He pitted for the penultimate time at three-quarters distance, attempting to undercut the leaders and gain track position by lapping quickly on new tyres.

Sadly, a minor electrical glitch prevented Renger – who had climbed in – from pulling away from his pit area. Over a lap was lost while the issue was rectified, costing him a shot at victory.

The Dutchman, who had combined with Dane and Mario to start the race from second place, continued to push hard during the final stages, but could not gain any more positions.

Third spot leaves the trio fifth in the IGTC Drivers’ Championship with Honda fifth in the Manufacturers’ points table.

Customer team Racers’ Edge Motorsport finished seventh with Trent Hindman, Shelby Blackstock and Robert Megennis at the wheel of their NSX GT3 Evo; the crew twice suffering left-rear punctures and losing several laps nursing the car back to the pits.

There was celebration for Blackstock and Hindman, however. By completing the third hour in third place of the GT World Challenge America teams entered, they secured the overall Teams’ and Drivers’ titles for the US series and made Acura Manufacturers’ Champions.

Mario Farnbacher
“This is a really good result for the team and I’m proud to be a part of this success and of the development of the NSX GT3 Evo. We’ve had great pace from the first minute of practice; we were just a bit unlucky to have the issue near the end of the race. It’s really good to be able to show that kind of speed in the wet and the dry. We’ve made a big step forward this weekend and I hope that we can bring everything we’ve learned together for Spa and achieve another great result there.”

Dane Cameron
“I’m very happy to achieve the first IGTC podium for the NSX GT3 Evo. It’s a huge milestone for this programme so I’m extremely proud to be a part of this result. It’s been a bit of a scrappy race with the weather and things didn’t go perfectly, but we still made some good steps in the right direction and had very strong pace whether it was wet, dry or the tricky in-between conditions. You have to execute the strategy perfectly to win at this level and we still need another small step forwards in performance, but after this result I’m really looking forward to Spa in a few weeks.”

Renger van der Zande
“We should all be very proud of this podium finish. The NSX GT3 Evo was very well balanced all weekend and the team did a great job on the setup. I would love to have taken the fight for victory right to the finish, but unfortunately we had the issue at the pitstop. At the end of a stint on worn tyres we had the fastest car so the team’s done very good work to make it consistent and I think the strategy and the execution of the pitstops were very good too. This is great preparation for Spa.”

Alessandro Mariani
Team Principal
“It’s extremely satisfying to score the first podium finish for the NSX GT3 Evo, but at the same time disappointing that a small technical issue denied us the chance to fight for the win right to the chequered flag. The team and the drivers did a fantastic job and we’ve been in the top three whatever the conditions. We’ve made a massive step forward in pace since the last race at Bathurst and for this we must thank Honda Performance Development and RealTime Racing for the precious co-operation. The NSX GT3 Evo has been a collaborative effort right from the start of the project and it’s very nice to share this result with these guys today.”