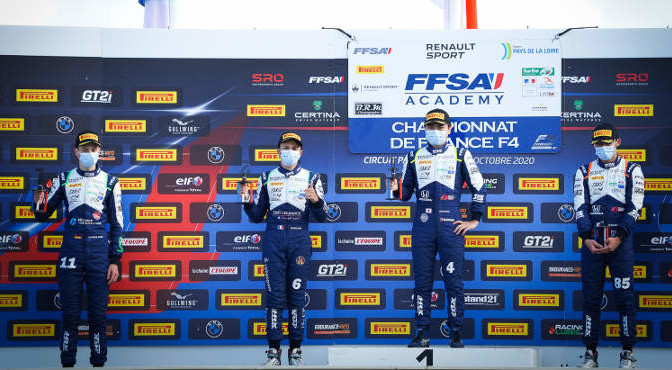 With drivers becoming more and more comfortable on the Paul Ricard circuit as the weekend went on, this fourth round of the French Championship took place without any notable incidents, with reduced gaps between the single-seaters meticulously prepared by the FFSA Academy team. The track was perfectly dry for the last race of the meeting, which again offered intense neck and neck competition.

Aware that he had a good chance against the Japanese drivers because of his great competitiveness at Paul Ricard, Isack Hadjar immediately attacked and overtook Ren Sato shortly after the start. His objective was clear: to put pressure on the leader Ayumu Iwasa, who had taken a double pole position on Friday. Behind him, Rafael Villagomez also started very well. The Mexican driver finished the first lap in 4th position in front of Valentino Catalano, who also started better than Sami Meguetounif.

Owen Tangavelou wasn’t able to exploit his encouraging 7th position on the starting grid fully, as he dropped back to 10th behind Romain Leroux, Loris Cabirou and Ivan Peklin. In the pack, the two Frenchmen Leroux and Cabirou had to battle it out in a very tight group, but the latter got the better of them on the second lap.

At the front, the head to head between Iwasa and Hadjar pushed both drivers to give their best. Determined to take his first victory of 2020 in his second year in F4, Isack Hadjar quickly set the fastest lap with 2’08″384. Seeing the Frenchman’s car in the rear-view mirrors, Ayumu Iwasa from Japan responded with equally excellent, but above all very consistent times.

Further back, Meguetounif caught up in the wake of Catalano and found the opening on the 6th lap after a superb braking manoeuvre. Unfortunately for him, the gap to Sato and Villagomez had already increased and the Frenchman had to settle for 5th place. Calm and focused on his goal, Iwasa made no mistakes and reached the finish line to win, despite Hadjar threatening until the end. With this sixth victory of the season, the Japanese driver increases his lead in the French F4 Championship against his compatriot Ren Sato. For his part, the latter held his ground against Villagomez, very combative at Paul Ricard.

Still unbeaten in the Junior class, Catalano was 6th in front of Cabirou, who was able to protect himself from an attack from Leroux. At the end of the race, Tangavelou brilliantly recovered a position against Ivan Peklin. Behind him, a final neck and neck battle involved three drivers. Daniel Ligier took the advantage over Etienne Cheli and Noah Andy, closely followed by the Indian Yash Aradhya, who made good progress on his debut with the FFSA Academy.