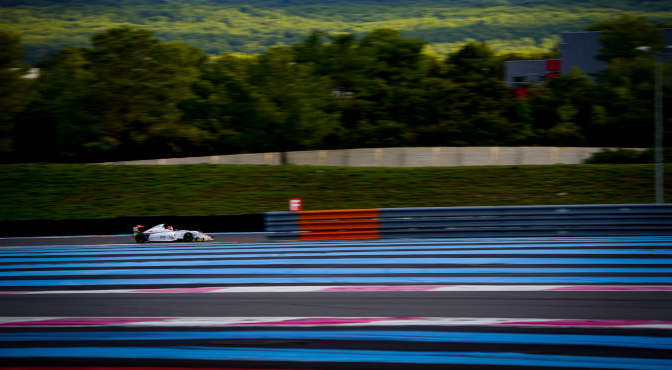 After a disrupted Friday, the south of France saw more clement weather conditions for the second official day of competition on the Paul Ricard circuit. In spite of still wet racing lines, the drivers were however able to put on slick tyres in Race 1, before taking advantage of a very dry track in the second. Many of the drivers made their best effort, although some of them experienced their share of disappointments. Lively starts and multiple passes helped by the slipstream phenomenon on the Var track, significant progress and a few incidents punctuated this particularly intense day.

Drivers walk the tightrope in Race 1

With the track predicted to dry out as the laps went on, the FFSA Academy staff made the right choice by fitting Pirelli slick tyres to the Mygale-Renault Sport single-seaters of the FIA French F4 Championship drivers. Japan’s Ayumu Iwasa, who took pole position for Race 1, capitalised on his start, which included an incident involving Mexico’s Rafael Villagomez and France’s Isack Hadjar, who started from 2nd and 4th positions respectively. Sato recovered 2nd place in front of Sami Meguetounif, who had started very well. The first lap also saw Romain Leroux move from 9th to 5th place and Etienne Cheli from 12th to 7th… a great achievement for a first start in F4!

As the laps went on, the gaps continued to fluctuate between the drivers, with a lot of uncertainty for the podium. In spite of setting the fastest lap in the race, Sato could not prevent his compatriot Iwasa from winning. Further back, Sami Meguetounif found himself under pressure from Valentino Catalano, who was very fast at the end of the race. Sami held firm and celebrated his second podium of the season, while Catalano won again in the Juniors. On this tricky track, the academicians showed their coolness in the pack, where the 5th-placed Romain Leroux finally outdistanced a compact group consisting of Mexico’s Rafael Villagomez, Ukraine’s Ivan Peklin, a solid Etienne Cheli, and Loris Cabirou.

Ranked 10th in Race 1, Owen Tangavelou started on pole position for Race 2 with the application of the inverted grid for the top 10. When the lights went out, Cabirou was the quickest and took the lead at turn one. Sato, who is an exemplary starter, was in 3rd position behind Tangavelou despite being 9th on the grid! Some upheavals took place in a heated field, in which Isack Hadjar gained several positions, unlike Cheli who dropped back. Another dramatic event occurred on the third lap with the exit of Tangavelou.

Villagomez had hardly the time to recover 3rd place, before he faced a beautiful attack from Hadjar. It was then the turn of Iwasa to attack and to take shelter from an intense duel between Peklin, Meguetounif and Leroux. The drivers made contact during a three-way incident, damaging their cars and compromising the possibility of obtaining a good result.

The suspense didn’t end there, with Sato overtaking Cabirou on lap 7. Taking advantage of his fresh tyres after his retirement at the start of Race 1, Hadjar set the fastest lap in the race and passed Cabirou in turn. Behind, Villagomez yielded to Iwasa and Catalano, again inspired on the Paul Ricard circuit.

Although Hadjar reduced the gap on the leader, Sato made no mistakes and went on to win. On the last lap, Iwasa won his place on the third step of the podium against Cabirou. Catalano was again the first Junior, 5th in front of Villagomez and Daniel Ligier, whose progress continues to pay off. Cheli maintained a small lead over Noah Andy, who was increasingly incisive. After a good start, the Indian Yash Aradhya unfortunately had to retire.