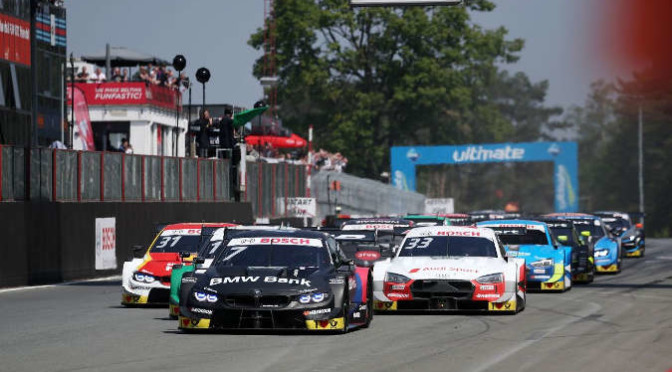 The DTM will also stage its seventh and eighth season round in the presence of spectators at Zolder. For the double-header in Belgium from 9-11 and from 16-18 October, the touring car drivers will again be able to enjoy the passionate support from the fans after Assen and the two Nürburgring events. However, tickets are strictly limited as only 800 one-day tickets for each of the four race days (Saturday and Sunday of both weekends) are available at Zolder. The exclusive tickets from 30 Euros can be ordered from the DTM Ticket Shop (tickets.dtm.com) and the DTM Ticket Hotline (+49 1806 386 386) with immediate effect.

At the former Grand Prix track of Zolder, located around 70 kilometers to the west of the German city of Aachen, the battle for the prestigious DTM title will be entering its hot stage. After all, once this double-header with two races each on back-to-back weekends has been completed, there is only the traditional season finale at Hockenheim (6-8 November) left on the compact calendar. A five-time race winner this season, Nico Müller (SUI) is heading into the thrilling final sprint in the DTM as the points’ leader. His fiercest rival is Robin Frijns (NED), for whom, coming from nearby Maastricht, Zolder is his home track. Frijns has won three races so far. The third Audi driver still in with justified title ambitions is two-time DTM champion René Rast (GER).

Zolder – where the DTM started off 36 years ago

The track at Zolder with a length of just over four kilometers has written a very special chapter in the long success story of the DTM that will continue with GT sports cars in the 2021 season: back in 1984, Harald Grohs won the inaugural DTM race with a BMW 635 CSi. The German will again be on the grid during the first Zolder weekend to race a BMW M3 in the Tourenwagen-Classics series. Next to the DTM and Tourenwagen-Classics, spectators will also get to watch the races of the GTC Cup series and the Porsche Carrera Cup Benelux. On the second Zolder weekend, the newly-introduced DTM Trophy with production-based GT sports cars and the Belcar Endurance Series will feature on the DTM’s support package.

During both race weekends, the T3a and T3b grandstands at Zolder will be open. Here, as on the entire facility, the use of face masks is mandatory. For the T3b grandstand, only 300 tickets are available per day (Saturday/Sunday) at a price of 50 Euros per person and 60 Euros including parking space. 500 tickets per day are available for the T3a grandstand at 30 Euros each or 40 Euros including parking space. The personalized one-day tickets as well as the car park tickets can only be ordered from the DTM Ticket Shop (tickets.dtm.com) and the DTM Ticket Hotline (+49 1806 386 386). Spectator areas can not be reached without a valid car park ticket, no ticket booths will be open at the track. Ticket sales for the first Zolder race weekend ends on 11 October at noon, for the second race weekend on 18 October at noon.

» Quotes
“We are really delighted to be able to welcome spectators again for the two season rounds at Zolder, even though the tickets are strictly limited. As always, it’s worth it, especially as the battle is coming to a head. The DTM is expecting a hot October at Zolder, a track that has written DTM history and is always good for exciting racing.”
Marcel Mohaupt, managing director, ITR GmbH