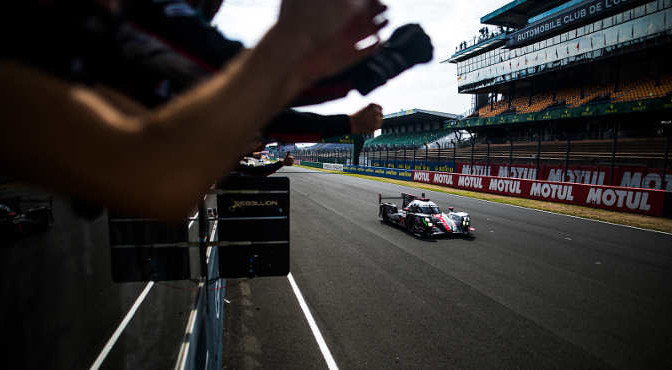 REBELLION Racing approached this weekend with the desire to bow out in the best possible way after many months of preparation. The two REBELLION R13 crews began their weekend on Thursday with 10 hours of testing and 45 minutes of qualifying.
The Swiss team didn’t lose a second to start the work for the race during free practice. The mechanics had to work very hard to change the engine of the R13 N.1 so that it would be ready for qualifying. In free practice 3, REBELLION gets his claws out and realizes the best time thanks to a lap of 3:19.158 of Louis Delétraz.

REBELLION Racing took up the challenge of Hyperpole on Friday, with Gustavo Menezes on N. 1 and Louis Delétraz on N. 3. The talented American driver achieved provisional pole in 3:15.822 before being dethroned by the Toyota N. 7 for only 5 tenths of a second! On the sister car, Louis Delétraz also did very well for his first participation by setting the 4th fastest time.

The long-awaited moment has arrived, the start of the 24 Hours of Le Mans is given 463 days after the arrival of the last edition. Bruno Senna, on the R13 N.1, and Nathanaël Berthon, on the R13 N.3, make an excellent start and keep up with the two Toyota cars. Bruno Senna even takes the lead for a few meters before the first braking where the Toyota is in a better position to take back the lead. Bruno Senna has the best race lap in the 4th lap in 3:19.264. After some problems for the Toyota #8, Nathanaël Berthon moves up to third place in the first hour. Whereas the drivers took turns and did one after the other on the track, the REBELLION R13s were running like clockwork.
During the night, shortly after the mid-race, the leading Toyota N.7 enters its garage, allowing Gustavo Menezes to move up to 2nd in the N.1 and Romain Dumas to take 3rd place in the N.3.
At dawn, the positions are unchanged with Norman Nato 2nd on the N.1 and Nathanaël Berthon 3rd on the N.3. A problem with the front bonnet made the R13 N.1 lose 5 minutes and came out of the pits just behind the N.3. The two cars were then wheel in wheel and had a very nice duel. Louis Delétraz climbs into the N.3 but loses time, as well as 2nd place, because the car had difficulty to restart because of a tired clutch.
Shortly before the last hour, Louis misses the braking at Indianapolis and a slight shock with the tyre wall damages the front. The team proceeded to change the muzzle and the rear wing, but when the driver wanted to restart, the clutch continued to work and caused a big loss of time that knocked the R13 N. 3 down to fourth place…

By crossing the line in 2nd position overall behind the untouchable Toyota, Norman Nato, Gustavo Menezes and Bruno Senna climb on the podium for the sixth time in a row this season. A double podium was clearly within the reach of REBELLION Racing without the clutch problems encountered by Louis Delétraz, Romain Dumas and Nathanaël Berthon in the last hours.
“Congratulations to Toyota for their more than deserved victory! We worked hard to reach this magnificent second place. Congratulations to the whole team for having distinguished themselves in this beautiful 2020 edition and for having for hours made the colours of REBELLION Racing shine very high.”

Alexandre Pesci, President and Owner of REBELLION Racing
“I’m very proud of the work accomplished by the team that has maintained a healthy pressure on Toyota throughout this beautiful yet special 2020 edition. Deprived of being at the side of the whole team because of a positive test with the Covid-19, it is with a heavy heart that we leave the Le Mans 24 Hours stage. ”

Calim Bouhadra, CEO of REBELLION Corporation
“It was a great weekend. Of course, we still want to fight for the victory but a podium at the 24 Hours of Le Mans, especially a 2nd place, is not refused. The team worked really hard all weekend. The engine change in free practice 2 made us lose precious time. We showed what we are capable of in Hyperpole with the fastest lap ever set by a non-hybrid LMP1 in 3:15.822 and surely one of the three fastest times in history. This gave us a good front row position on the grid. Bruno made a very good start and was able to fight with Toyota. After the first four hours, we were less demanding with the engine and the brakes. I was very happy with my quadruple stint at night and when the Toyota #7 had a problem and we were second again, we still wanted to fight. In the early morning we had a problem with the muzzle that was causing us to lose air support. We lost time to change it and the sister car passed in front. I am really happy with this 2nd place because it is the best overall result of REBELLION in Le Mans, the best for me too. I now have three Le Mans 24 Hours trophies at home!”

Gustavo Menezes, driver of REBELLION #1
“It was a good week for us with a very good Hyperpole. Bruno made a very good start and the first stint were good, in the pace of the Toyota. Then the temperatures started to drop and we ensured the safety because we were no longer able to go for them without making mistakes. We had a problem that made us lose 5 minutes, but otherwise our race was perfect. I am on the podium for my first participation in Le Mans in LMP1. A big thank you to the whole team for the work they have done and it’s a great conclusion to our 2019-2020 season.”

Norman Nato, driver of REBELLION #1
“It’s an unforgettable result and it’s incredible for the team to beat Toyota and to have been able to follow their rhythm at the beginning of the race. It was a very good race and the team did a very good job. Of course we would have liked to see both cars on the podium but we take this result as a victory for the last LMP1 race of REBELLION.”

Bruno Senna, driver of REBELLION #1
“Congratulations to the whole REBELLION team and the crew of the car N.1. I have a big thought for Alexandre Pesci and Calim Bouhadra without whom REBELLION would not exist and a big thank you to them. We had our ups and downs with Romain and Louis who did a great job. We had a few problems with the car but we did the best we could on our side and we can be proud of that. It is obviously sad not to be on the podium. It was a pleasure to be part of this team and I hope our paths will cross again one day.”

Nathanaël Berthon, driver of REBELLION #3
“It was a race with ups and downs. The reliability was almost perfect even if the clutch and a change of bonnet cost us third place. The team did a very good job. We were still in the top 4 with a comeback to 2nd and then 3rd place in the last few hours. We are sad to have lost this podium, but I think it is a great result for REBELLION to finish 2nd with his two cars crossing the line. Personally, I had a lot of fun with this car and the result is positive. ”

Romain Dumas, driver of REBELLION #3
“We are disappointed to have lost the podium in the last hour. The car was tired and the clutch problem forced us to bring the car into the garage. I’m sorry for the whole team because we didn’t deserve this. I think we did a really good job the rest of the race and I thank Romain and Nathanaël, because it was a great pleasure to share the car with them. A big thank you and a big bravo to Alexandre Pesci who made history with REBELLION and nobody will forget what he did.”