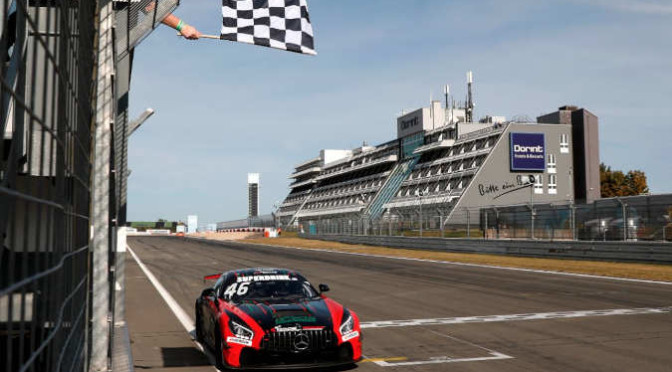 The Heinemann festival in the DTM Trophy continues: Tim Heinemann (GER, Mercedes-AMG, HP Racing International) has also won the second race at the Nürburgring sprint circuit in a dominant way. With his sixth consecutive victory, the protégé of DTM record champion Bernd Schneider has made another step towards the title. Already in the next round at Zolder (BEL), he can become the inaugural champion of the new DTM Trophy. Like on Saturday, Heinemann also started off by claiming pole position on Sunday, followed by the race win and therefore the maximum point score. Once again, his compatriot Peter Terting finished second with the PROsport Racing Porsche. He was Heinemann’s fiercest rival, but never really posed a threat. Jan Kisiel (POL, Mercedes-AMG, Leipert Motorsport) rounded out the podium.

Once again, the spectators got to see thrilling racing action in the race on Sunday. The start was already spectacular: while Heinemann pulled away upfront, the drivers behind him were three abreast going into the first corner. Kisiel tried to get the better of Terting, but the latter expected that move and skilfully closed the gap. Soon after that, Kisiel went past after all, but joy for the 26-year-old only was brief. Terting struck back, moved to the inside next to the Pole who had to cut the chicane and then had to give back his position without a battle. Further down the ranks, Lucas Mauron spun after a driver error. The Swiss driver of the Hella pagid – racing one team then started a fulminant recovery and worked his way up from last to ninth with his Audi R8 LMS, still scoring points as a result.

With his sixth win of the season, championship leader Tim Heinemann has boosted his tally to 206 points. Jan Kisiel, who already was on the podium for the fourth time this season on Sunday, defended his second place with 112 points. British driver Ben Tuck (BMW, Walkenhorst Motorsport) is third at 99 points. Action in the DTM Trophy resumes at Zolder in Belgium in October.

» Quotes – race 2, Nürburgring Sprint
“A perfect day! Six victories in a row, simply unbelievable. After the start, I was able to pull a slight gap, but Peter Terting put me under pressure. I was driving at the limit almost every lap. When leading the championship, you do start to think about the title. Nevertheless, we are working from day to day, from race to race.”
Tim Heinemann (GER), Mercedes-AMG, HP Racing International
“An interesting race. Just after the start, Jan Kisiel overtook me, but I went for it in the chicane a little bit later and made my way past again with a fairly hard maneuver. Apart from that, I tried the same as already on Saturday: pushing to try and close up to Tim and battle for victory. But whenever I found a tenth of a second somewhere, I lost it again somewhere else. However, we keep fighting and aren’t giving up.”
Peter Terting (TER) , Porsche, PROsport Racing
“I made use of the situation after the start and focussed on Peter Terting. Unfortunately, it wasn’t to be. The gap to the front was too big, and the gap to the rear was big enough. Basically, I was out there on my own and drove a relatively solitary race. We had to change the set-up of the car in the final seconds before the race. That worked out, but the performance wasn’t as good as on Saturday. All in all, however, it is a race result that I can definitely live with.”
Jan Kisiel (POL), Mercedes-AMG, Leipert Motorsport