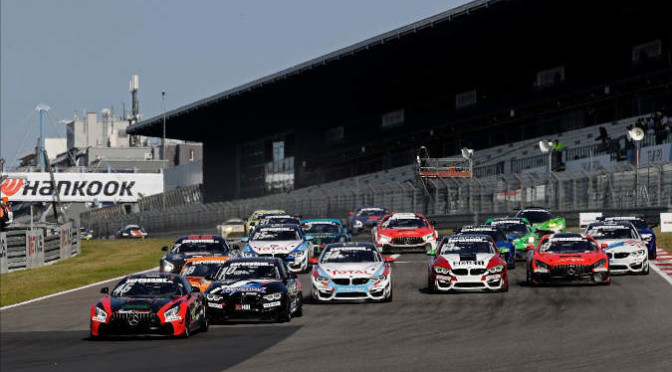 A positive interim report: as a second-tier series to the DTM, the newly introduced DTM Trophy continues to attract the attention and to provide entertaining motorsport action. During the second visit at the Nürburgring, the production-based GT sports cars will already be taking on the fourth season round. That marks the start of the second season half with Zolder (BEL) and Hockenheim (GER) still to follow on the compact race schedule.

The field of competitors is surprisingly well-balanced, but one driver seems to be dominating at will: Tim Heinemann. The 23-year-old from Fichtenberg, Germany, got his campaign underway with a pair of second-place finishes at Spa and then scored four consecutive victories in a commanding way with his Mercedes-AMG GT, run by the HP Racing International team. At the Grand Prix track in the Eifel last weekend, he finished ahead of Brits Ben Green (BMW, FK Performance Motorsport) and Ben Tuck (BMW, Walkenhorst Motorsport) on Saturday and of Austrian Reinhard Kofler (KTM, Teichmann Racing) and Pole Jan Kisiel (Mercedes-AMG, Leipert Motorsport) on Sunday. DTM record champion Bernd Schneider had discovered Tim Heinemann’s considerable talent at an early stage already. Schneider has been his main supporter ever since. Last weekend, Bernd Schneider was on site at the Nürburgring himself to actively support his protégé.

Including the additional championship points for three pole positions, Tim Heinemann already has a considerable margin with 150 championship points. Behind him, however, spirited battles are going on for every single point. Jan Kisiel has racked up 84 points so far and has moved up to second place in the drivers’ standings. Ben Tuck is following in third place at 77 points from Ben Green at 71. Tuck and Green were the respective race winners during the inaugural DTM Trophy event in Belgium.

Moreover, Ben Green is the best from the ranks of the ‘young and wild’. At 67 points, he is currently leading the junior classification for young talents of up to 22 years. Swiss Felix Hirsiger (Porsche, Allied Racing) at 46 points and Jan Philipp Springob (Mercedes-AMG, Superdrink by Bremotion) at 34 points are Green’s closest rivals.

The drivers’ field: a colourful mix and well-balanced

The drivers’ field of the new DTM Trophy is a colourful mix. GT sports cars from six brands, namely, von Audi, BMW, KTM, Mercedes, Porsche and Toyota, provide high-class competition. In the race at the Nürburgring on Sunday, four different brands were represented among the first five positions – a proof of the balance and an effective balancing of the cars (balance of performance). The DTM Trophy immediately attracts international attention as drivers from eight different countries are competing in the series. A newcomer for the fourth season round is Nico Verdonck. The GT stalwart from Belgium is driving a Toyota Supra from the Ring Racing team for the first time.

The 3.629 kilometres long Nürburgring sprint circuit poses a new challenge in the still-young history of the DTM Trophy. The short track length and the comparatively high number of laps during the half-hour duration of the race are a guarantee for close position fights and numerous position changes – exactly what spectators like. After all, for the second event at the Nürburgring, fans will again provide a special atmosphere in the grandstands, albeit in limited numbers. Personalised one-day tickets can be ordered until Sunday at noon online from the DTM Ticket Shop (tickets.dtm.com) or from the DTM Ticket Hotline (+49 1806 386 386). Moreover, the streaming platform DTM Grid (grid.dtm.com) is showing every qualifying session and every race (start at 15.15 hrs on each day) on TV screens and smartphones, live and on-demand.

» Quotes
“The first season half has shown that we have filled a void with the DTM Trophy. The DTM Trophy stands for pure racing action without pit stops and without driver changes and that is getting great acclaim. The balancing of the cars proves to be effective as the races are closely fought and therefore very exciting. There are spirited battles to the great pleasure of the spectators who will also be present again at the Nürburgring this weekend.”
Marcel Mohaupt, managing director, ITR GmbH