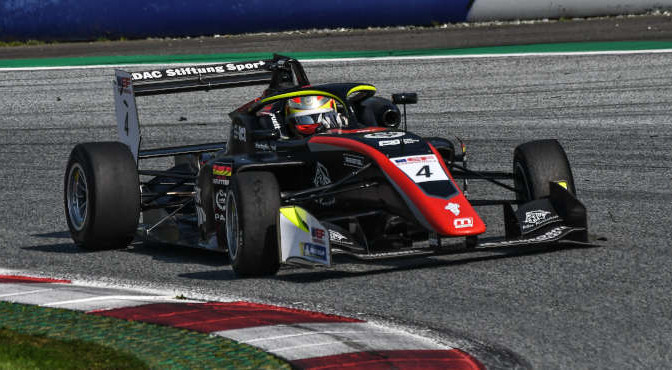 Niklas Krütten from Team Motopark took his first podium in Formula 3 in the Euroformula Open at the weekend and secured his second victory in the Rookie classification. He showed great determination during the formula racing series third race meeting of the year at the Red Bull Ring as he continued to improve his showing this season.

Krütten qualified fifth for both races at the Formula 1 circuit. In Sunday’s race, he was in the top group of drivers, fighting for position right from the start and had soon worked his way up into P3. He defended his position to the finish and secured his first podium in the Euroformula Open. The ADAC Sports Foundation protégé won his second trophy for coming first in the Rookie classification.

With this strong result, 17-year-old Krütten has now proved that he is one of the fastest in the field. However, he was also forced to realise that things can soon change when the going gets tough. A problem at the start dropped him to the rear of the field initially in the first race on Saturday, but he fought his way back up during the race with a series of terrific overtaking manoeuvres. He finally crossed the line in eighth place overall and was third-best rookie.

Thanks to the 19 points in all secured by Krütten during the Red Bull Ring race weekend, he moves up into seventh place overall in the drivers’ standings and is in first position in the Rookie classification.

The fourth Euroformula Open race meeting of the season is next up in two weeks’ time (26th/27th September) when the juniors go head-to-head at Monza’s famous circuit.

Congratulations on taking your first podium! What was the key to success?
We continued to work hard and systematically in preparation for the Red Bull Ring after making progress earlier at Paul Ricard. I immediately felt comfortable in the car during Friday practice and quickly found my rhythm. I had some difficulty getting started in Saturday’s race, but everything went well on Sunday. I made a solid start and my pace in the race was strong.

Race 1 didn’t go according to plan. How did you deal with that?
Of course, you find it a little frustrating at first, because another good result would have been a distinct possibility, but you quickly see the positive side of things from the race and quali and then focus fully on the next day. Setbacks and mistakes are part and parcel of motor racing. You learn to deal with them, even if it’s not always easy.

You’ve reached a milestone with this first podium. What’s your next goal?
My goal has to be to continue to work hard in order to become more established in the top group in the next set of races. The potential and the pace are there, and I would like to fight for more podium success.