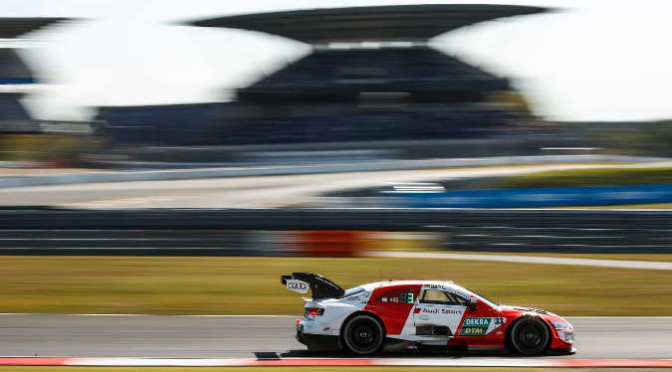 The grandstands remain open: for the second DTM race weekend at the Nürburgring within one week, spectators are admitted as well. The responsible district administration Kreisverwaltung Ahrweiler has given the start signal for the ticket sales for the DTM’s sixth season round (18-20 September). As of now, one-day tickets for Saturday and Sunday are available at 49 Euros each from the DTM Ticket Shop (tickets.dtm.com) or the DTM Ticket Hotline (+49 1806 386 386).

Last weekend already, the fans in the three grandstands that were open contributed to emotional moments in the Eifel. On both days, all DTM drivers walked along the grandstands during the starting grid procedure, waved to the spectators and thanked them for their support with applause. The appreciation speeches by reigning DTM champion René Rast and ex-Formula 1 driver Timo Glock, who addressed the fans right in front of the grandstands, were emotional, too.

However, it is not just the DTM with its 640 hp strong touring cars that will be staging powerful action at the 3.629 kilometres long Nürburgring sprint circuit from 18-20 September. The production-based GT sports cars from six car manufacturers in the newly introduced DTM Trophy will be back. On top of that, the Tourenwagen Classics (TWC) will cater for nostalgic highlights, just like the Tourenwagen Legenden (TWL). Legendary touring cars from Alfa Romeo, BMW, Mercedes, Opel and other brands also revive the history of the DTM that had its inaugural season in 1984. In the process, several star drivers from the past will be showing their competitive spirit just like back in the day. In total, eight races will be held on Saturday and Sunday to ensure that the fans will get their money’s worth.

The strictly limited grandstand tickets including allocated parking space can be ordered until the respective race day at noon (start of the DTM races both on Saturday and Sunday at 13.30 hrs). Previously acquired Nürburgring tickets are no longer valid and don’t give access to the grandstands. All vouchers already issued can be redeemed at any time and irrespective of the event at the DTM Ticket Shop and through the DTM Ticket Hotline.

VIP guests will also find suitable accommodation at the Nürburgring: tickets for the business°lounge including high-quality catering and excellent view of the race track are available from 249 Euros. VIP tickets can only be purchased through the circuit website at www.nuerburgring.de/dtm.

» Quotes
“The first weekend provided exciting races with entertaining duels. I would say, everything was there that motorsport fans could ask for. For the DTM, for the drivers and for us at the circuit, it was nice that spectators could be present on site to watch the action live. Now, the second DTM weekend is imminent and we are looking forward to the continuation – in a sporting way at the track and in terms of atmosphere in the grandstands.”
Mirco Markfort, managing director, Nürburgring 1927 GmbH & Co. KG
“These were great emotions that the spectators have brought us at the Nürburgring last weekend. Simply marvellous! As a result, we are all the more happy that spectators will be admitted again for the second weekend at the Nürburgring as well.”
Marcel Mohaupt, managing director, ITR GmbH